BOSTON – The Trump administration has eliminated a protection that lets immigrants remain in the country and avoid deportation while they or their relatives receive life-saving medical treatments or endure other hardships, immigration officials said in letters issued to families this month. 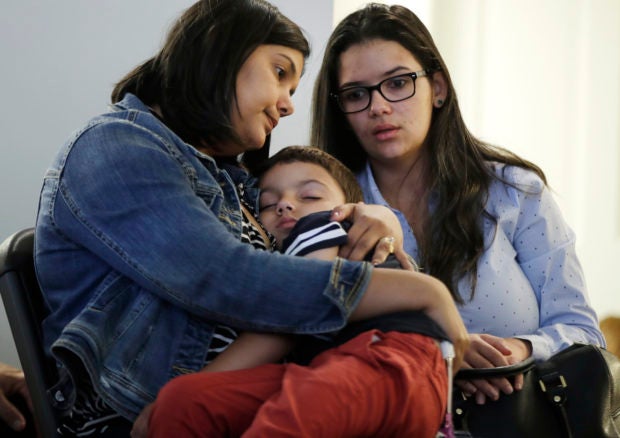 Critics denounced the decision as a cruel change that could force desperate migrants to accept lesser treatment in their poverty-stricken homelands.

Mariela Sanchez, a native of Honduras who recently applied for the special exemption, said a denial would amount to a death sentence for her 16-year-old son, Jonathan, who suffers from cystic fibrosis. They are among many families who settled in Boston to seek care at some of the nation’s top hospitals.

Sanchez, who arrived in the U.S. with her family in 2016, said she lost a daughter to the same disease years ago after doctors in her home country failed to diagnose it.

The disease, which is hereditary, affects the lungs and digestive system and has no cure.

“He would be dead,” if the family had remained in Honduras, she said of her son. “I have panic attacks over this every day.”

Advocates say similar letters from Citizenship and Immigration Services have been issued to immigrants in California, North Carolina and elsewhere.

“Can anyone imagine the government ordering you to disconnect your child from life-saving care — to pull them from a hospital bed — knowing that it will cost them their lives?” Marino said.

A Citizenship and Immigration Services spokeswoman said the policy change was effective Aug. 7.

It affects all pending requests, including from those seeking a renewal of the two-year authorization and those applying for the first time. The only exception is for military members and their families.

The special status is similar to the Deferred Action for Childhood Arrivals program that then-President Barack Obama created in 2012 to shield immigrants brought to the country as children from deportation — another policy the administration has been trying to dismantle.

The agency estimates it receives about 1,000 deferred action requests per year that are related neither to the military nor to DACA. Most of them cite medical or financial hardships, the agency said.

Going forward, applicants will be able to seek deportation deferrals from a different agency, Immigration Customs and Enforcement, according to the spokeswoman.

Letters sent to Boston-area families last week and reviewed by The Associated Press, however, do not mention that option. They simply order applicants to leave the country within 33 days or face deportation, which can hurt future visa or immigration requests.

The elimination of the special status for medical care is one of several aggressive steps the Trump administration has taken in recent weeks to crack down on immigrants.

The administration also wants to deny green cards to many immigrants who use Medicaid, food stamps, housing vouchers or other public assistance, and to end a long-running agreement limiting how long migrant children can be kept in detention. President Donald Trump floated the idea of ending the right to citizenship for babies born to foreigners on American soil, and the administration wants to effectively ban asylum along the U.S.-Mexico border.

The deferrals, they added, do not provide families a pathway to citizenship, though they can qualify for government-funded health benefits and receive legal permission to work while their children receive medical treatment.

“They’re not coming for a free ride. They’re coming to save their children,” said Joe Chabot, a director at the Dana-Farber/Boston Children’s Cancer and Blood Disorders Center. “It’s bewildering.” /gsg