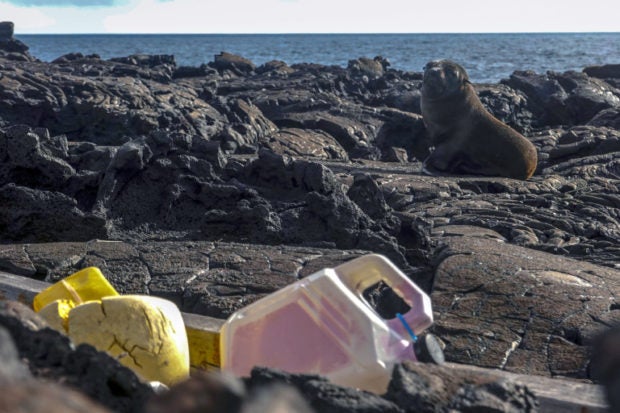 A Galapagos fur seal (Arctocephalus galapagoensis) rests near a strip of garbage on the shore of Isabela Island in the Galapagos Archipelago in the Pacific Ocean 1000 kilometers off the coast of Ecuador, on Feb. 21, 2019. – Galapagos National Park rangers and a group of volunteers collect garbage in remote places and unpopulated areas on the Isabela Islands and San Cristobal coast. Image: AFP/Rodrigo Buendia

Looking after the environment is paying off in Ecuador, at least for public transport users in the business hub of Guayaquil.

The port city, in Ecuador’s southwest, is the second most populous city in the country with 2.7 million inhabitants, but it generates the most waste.

Passengers who use the city’s bus transit system, Metrovia, are now queueing at a newly installed machine, waiting to unload their plastic bottles for two cents each, which they can spend on public transport.

The 76-year-old pensioner lives outside Guayaquil, a $9 taxi ride into town. He makes the walk once a week, collecting plastic bottles from garbage cans and the streets along his way.

Guayaquil produces 4,200 tons of waste a day, only 14 percent of which is recyclable.

“The city is full of corruption and dirty. Before it wasn’t like this, it was cleaner,” he said.

‘We need to be aware’

There’s one glitch in the current system, though. The machines pay out cash in return for bottles, meaning there’s no obligation to use the money on bus tickets.

Metrovia manager Leopoldo Falquez told AFP that the company is working on that.

New machines are coming that will directly recharge bus passes, he said.

So far there’s only one machine but there are plans for a dozen, all to be placed in bus terminals.

Two years ago the local government placed rules on the production, sale and import of single-use plastics such as bags and straws.

Ecuador’s war against plastic has extended also to other parts of the country such as the capital Quito and the Galapagos Islands, a World Heritage Site archipelago several hundred kilometers (miles) to the west of the mainland.

Plastics there have broken down into microparticles that have subsequently been swallowed by the unique fauna found nowhere else on the planet.

In the two months since the program was launched, more than 24,000 bottles have been collected. JB