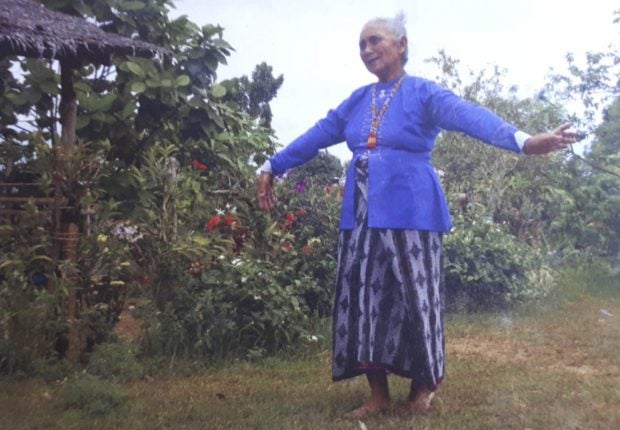 It was a big role for the 87-year-old, as the peace-loving Subanon who had migrated from Indonesia some 2,000 years ago to settle in the hills of Zamboanga have to continually grapple with the inroads of modern life while protecting their culture.

With more settlers and traders coming into the community in recent years, the Subanon have to contend with illegal logging and other threats to their ancestral domain that the tribe considers sacred ground.

At the same time, younger members of the tribe have been leaving for more lucrative jobs in the cities and lowlands, leaving their elders to maintain their customs and keep their traditions alive.

So when Timuay Dlibon Bacasmas succumbed to pneumonia on Aug. 16, the village of Tupilak mourned not just the loss of a pillar of their community, but also the loss of another gatekeeper of their culture.

Only “exceptional” individuals were given a chance at this exalted post, and very few women were chosen, according to Henrico Gumibao, regional director of the National Commission on Indigenous Peoples in Western Mindanao.

But Sunudan recalled that the young Antonia was chosen by the Timuay Diki Sunudan to succeed him “because she was smart, strong, brave, intelligent and loves to promote our culture through dance.”

“She was the best dancer of saboy,” he added, referring to the dance steps of the traditional Subanon dance reserved for women. Steps reserved for men are called “mangigal.”

The music gene seems to run in the family. The Bacasmas family here is known for being artists who know by heart the songs, letters and dances of the Subanon tribe, even if many of them have relocated to the big cities.

Johnsen Paul Dapat, 21, one of Antonia’s 24 grandchildren, said his grandmother taught him the traditional Subanon dance at the age of 2.

“Everyone in the family is taught to dance as soon as they can stand and walk,” he said.

When Sunudan died in 1982, the elders trained their sight on Antonia who has been known for being well-versed with Subanon tribal laws.

When the next “dlumpok” or gathering of leaders was convened, she was an easy choice as next tribal chieftain.

But with her now gone, filling this chieftain’s shoes poses a big challenge for her seven children, 24 grandchildren and 16 great grandchildren.

Inquirer photographer Edwin Bacasmas, one of the seven children, said Tupilak would have its next chieftain soon, adding that his older brother, Edmundo, 56, would submit himself to the elders in the coming dlumpok.

“Traditionally it is the eldest son, but our eldest begged off since he is now residing in Manila,” Edwin said, referring to Ernaldo, 62.

Ejiojita Mary, 60, the second child, is thought to be unqualified because of her strong personality.

“The village needs someone who is calm and well-versed in our ancient laws,” Edwin said.

The third child, Ernesto Jr., is an overseas worker in Dubai.

It is Edmundo who is seen to possess his mother’s qualities.

But whoever replaces the older Bacasmas, one thing remains clear: The tribe will miss this chieftain who used her dance skills to transmit cultural knowledge to the young, leaving behind a rich legacy of pride and identity among the Subanon.