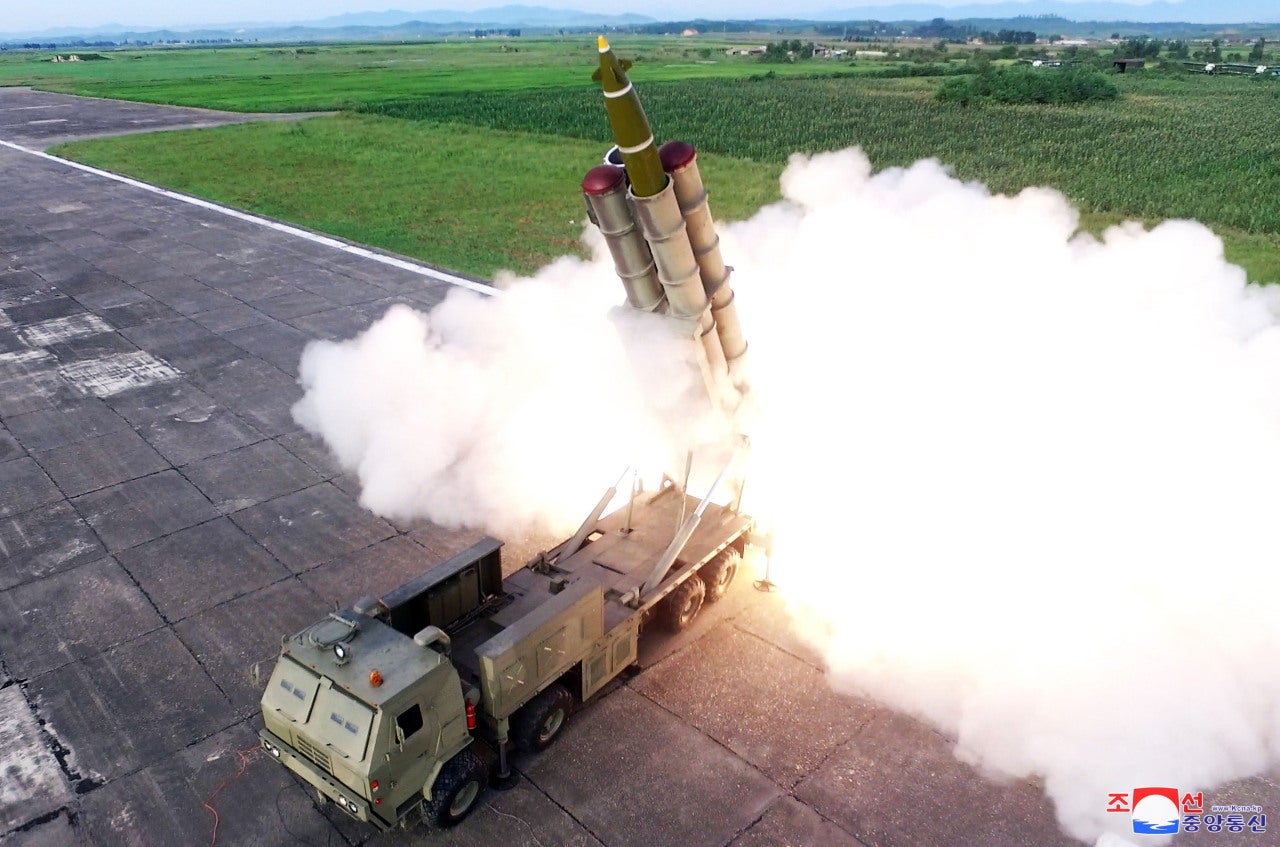 A missile is fired during the test of a multiple rocket launcher in this undated photo released on Sunday. (Yonhap via The Korea Herald/Asia News Network)

SEOUL — North Korea on Sunday boasted the successful test-firing of what it called a “newly developed super-large multiple rocket launcher,” a day after it fired two projectiles into the East Sea.

“The test-fire proved that all the tactical and technological specifications of the system correctly reached the preset indexes,” Rodong Sinmun said. 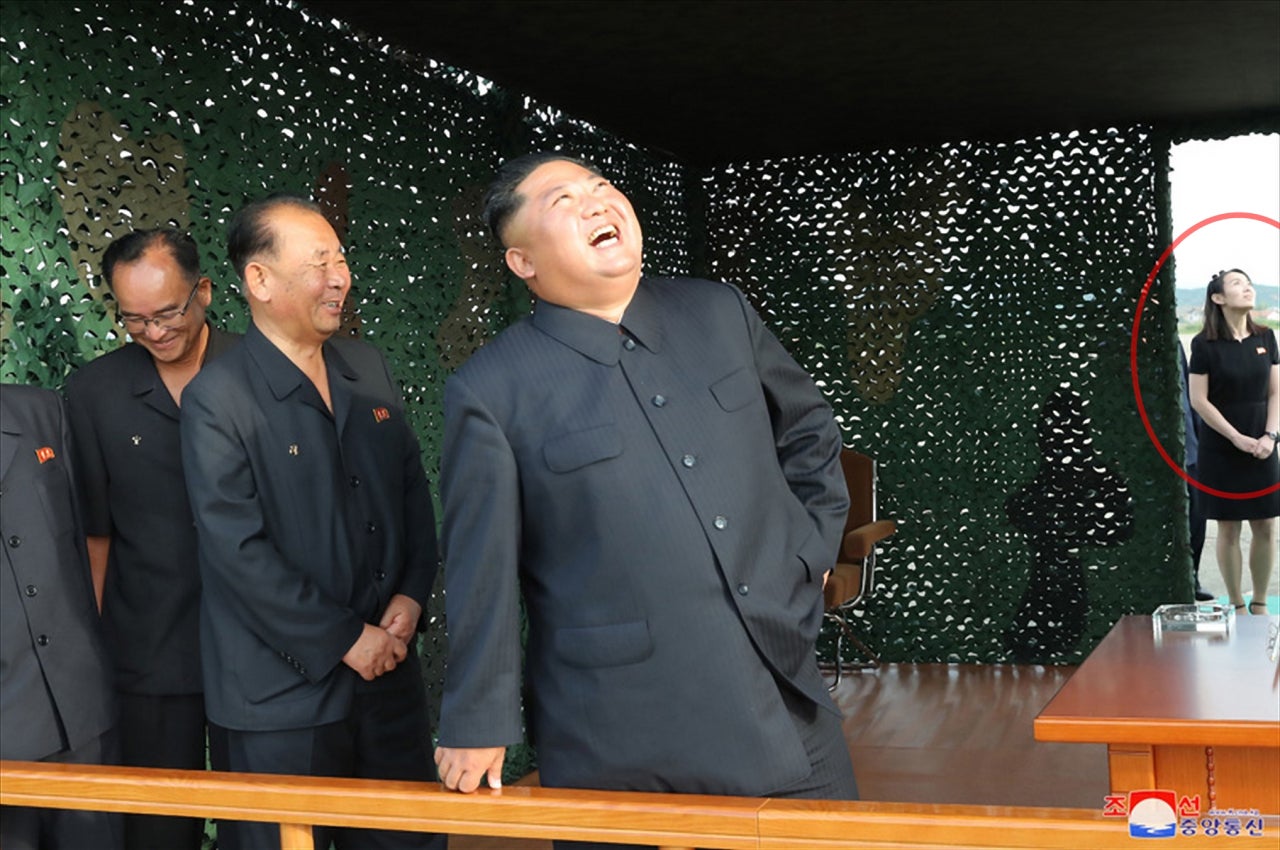 Kim complimented the young national defense scientists as “clever,” performing great work to successfully launch the new weapon system that they never saw before at “one go-off.”

Adding that Kim said Saturday was an “unforgettable good day,” the leader also referenced the test-firing of their submarine-launched underwater ballistic missile fired exactly three years prior, on Aug. 24, 2016.

“Each Juche weapon developed and completed by us reflects the greatness of the Workers’ Party of Korea which provided powerful war deterrent capable of firmly defending Korean-style socialism with the responsibility for the destiny and future of the country and the people and the noble loyalty of our national defence scientists who have unsparingly devoted their blood and sweats of patriotism true to the leadership of the Party,” Rodong Sinmun quoted Kim as saying.

While it was not mentioned in the article, Kim’s sister Kim Yo-jong was also spotted at the scene in pictures released by the North Korean news outlets.

On Saturday, South Korea’s Joint Chiefs of Staff said North Korea fired two projectiles into the East Sea at 6:45 a.m. and 7:02 a.m. from the eastern town of Sondok in South Hamgyong Province.

The two projectiles flew around 380 kilometers at a maximum altitude of 97 kilometers, and at a top speed of Mach 6.5.

Analyzing photographs revealed by the news outlet, the new weapon appears to have launched from a wheel-type transporter erector launcher.

It is the eighth time North Korea launched projectiles this year. From November 2017, North Korea had stopped firing missiles until May 4 this year, when it fired what appeared to be the North Korean version of Russia’s Iskander short-range ballistic missiles. 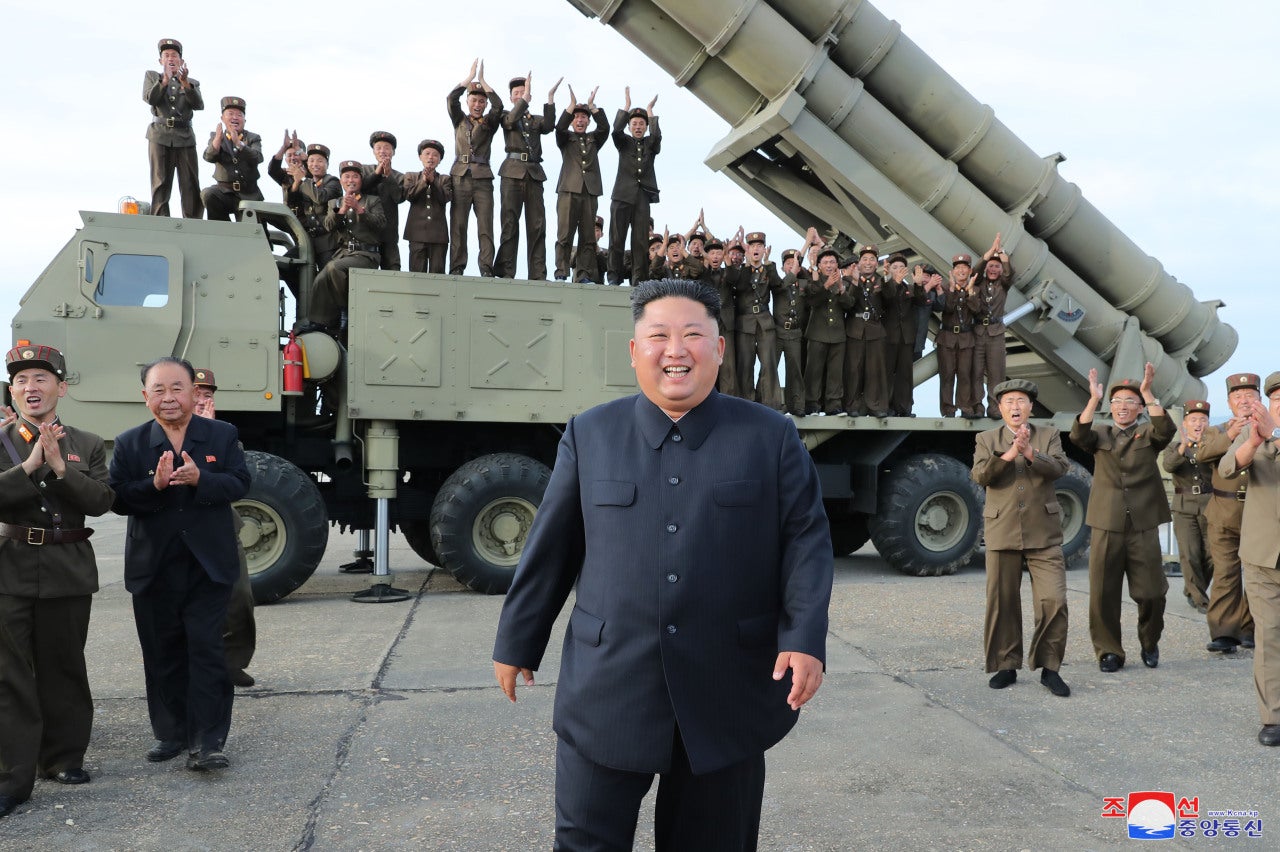 Following the May launches, the regime conducted missile tests several times, which appeared to include its own version of the US Army Tactical Missile System.

Considering Saturday’s projectiles reached higher altitudes of over 90 kilometers, there are possibilities that Pyongyang has come up with a fresh type of weapons, experts say. The peak altitude of previous launches this year ranged from 25 km to 60 km.

“Looking at how they used expressions such as ‘super-large,’ there is a possibility of the missile being a completely different weapon system that is bigger than 400 millimeters in diameter,” said Kim Dong-yeob, a professor at Kyungnam University’s North Korean Studies School.

Kim also said that Pyongyang’s launches appear to be largely aimed at its domestic audience, even though North Korea said its launches are to pressure South Korea for its joint military exercises with the United States.

Read Next
Vietnam’s air traffic controllers face the strain with rising flights
EDITORS' PICK
Senate OKs on 3rd reading bill allowing school opening after August
New strategies urged to improve public transport
Leveling up your ‘lutong bahay’ with the kitchen companion you never knew you needed
Cherry Mobile teams up with Cloud Panda PH, launches online store
Chaos as thousands return to work in Metro Manila
Someone from the Philippines can become $356 Million richer this Tuesday
MOST READ
Senate OKs bill authorizing president to postpone opening of classes beyond August
‘If I had not been SolGen, I will make you eat your words,’ Calida tells Coco Martin
Chaos as thousands return to work in Metro Manila
51 percent of German firms holding back investments in PH, but not because of COVID-19
Don't miss out on the latest news and information.