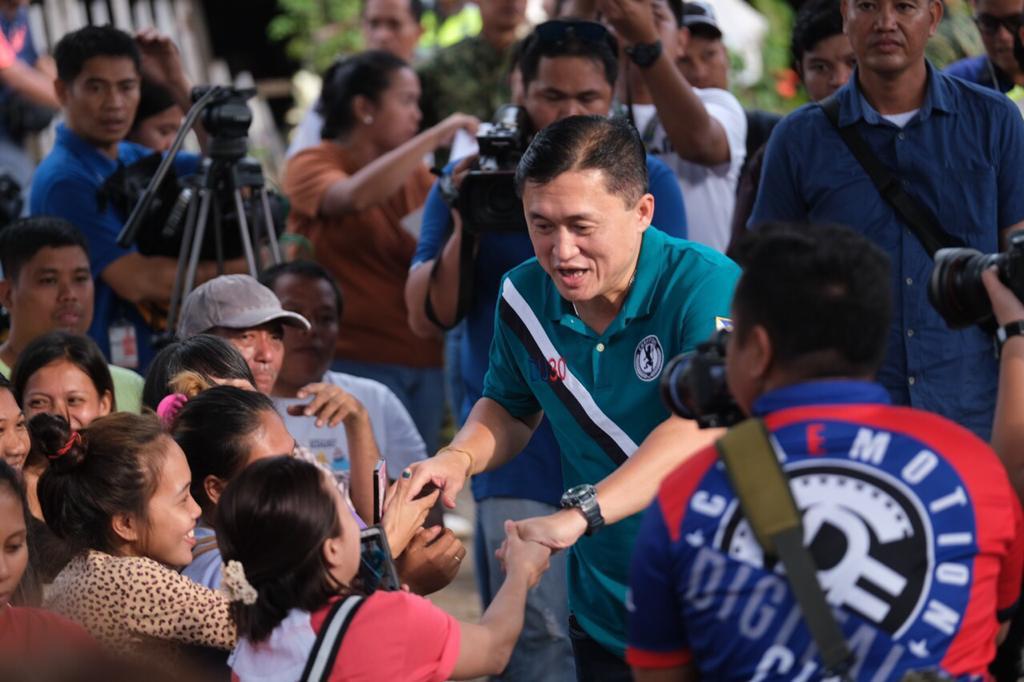 The senator distributed food packs, relief assistance and groceries to an estimated 230 families affected by both incidents. He added that he also brought supplies for the students so they can go back to school immediately.

Go told affected residents that representatives of the different government agencies are also ready to give assistance, such as the Department of Health (DOH) through the city’s health office, Philippine Charity Sweepstakes Office (PCSO), and Department of Social Welfare and Development (DSWD).

Also present were officials from the National Housing Authority (NHA) for housing assistance, Technical Education and Skills Development Authority (TESDA) for the provision of skills training, Presidential Commission for the Urban Poor (PCUP) for other forms of assistance, and the Department of Trade and Industry (DTI) for alternative livelihood programs. Go also added that the Lion’s Club members also joined in to help and assist the victims.

The senator also shared and explained that affected individuals who have health concerns can go directly to the city’s public hospital and inquire at the Malasakit Center located there to avail medical assistance from the government.

In response to Albay 1st District Representative Edcel Lagman’s allegation that the operations of Malasakit Centers are being used as a “partisan tool rather than a medical outlet,” Go said in an interview after the visits that the centers are simply serving their intended purpose of providing swift, effective and reliable medical services to all Filipinos.

The Malasakit Center program was initiated by Go when he was still Special Assistant to the President. Hosted in government hospitals in different parts of the country, the centers serve as one-stop shops for the aggregated medical assistance granted by different government agencies.

Meanwhile, answering Lagman’s question on the legal basis for PCSO’s alleged funding of the program, Go explained that the PCSO is just one of the agencies in the Malasakit Center providing medical assistance to indigents and is not paying for its operations.

“Along with PhilHealth, DOH, DSWD and PCSO, Malasakit Center becomes the processing center or the one-stop shop found in public hospitals so that patients do not need to waste their time lining up in different government agencies just to seek help,” Go said.

Go clarified that the Malasakit Center is simply a mechanism for agencies to streamline their processes in providing medical assistance to Filipinos, and that they do not provide funds in the establishment of such offices.

“To clarify further, PCSO does not provide funds in the establishment of Malasakit Centers. All these agencies retain their medical assistance programs, with their separate funds, even if they are part of the Malasakit Center.,” Go said.

The senator also reiterated that it is not the centers that choose the beneficiaries, but the agencies, themselves, who assess how much financial help they will provide a recipient.

Go stressed that according to PCSO officials, their medical assistance program has been in existence even prior to the creation of Malasakit Centers. He cited further that there have been improvements in PCSO’s service delivery in view of the concept of the one-stop shop Malasakit Center, making indigents’ availment to their and other agencies’ assistance programs easy and accessible.

He further explained that PCSO directly provides assistance to patients and “walang pinipili, non-partisan po ito.” Go reiterated that every Filipino is entitled to various services of the Malasakit Center, particularly the poor and indigent.

Moreover, the senator said that he has no objection if anyone wants to investigate the program and welcomes those who would like to probe the operations of the Malasakit Centers.

Moreover, Go reminded Albay Congressman Lagman that a Malasakit Center was launched at the Bicol Regional Training and Teaching Hospital in Legazpi City, Albay last October 2018, during which Vice Governor Edcel Greco Lagman, son of the representative himself, witnessed and supported its launch.

Currently, there are 41 successfully established and fully operational Malasakit Centers in the country, including two in Bicol region.