COX’S BAZAR, Bangladesh – Thousands of angry and frustrated Rohingya refugees have marked the second anniversary of their exodus from Myanmar into Bangladesh by demanding their citizenship and other rights in the country they fled from. 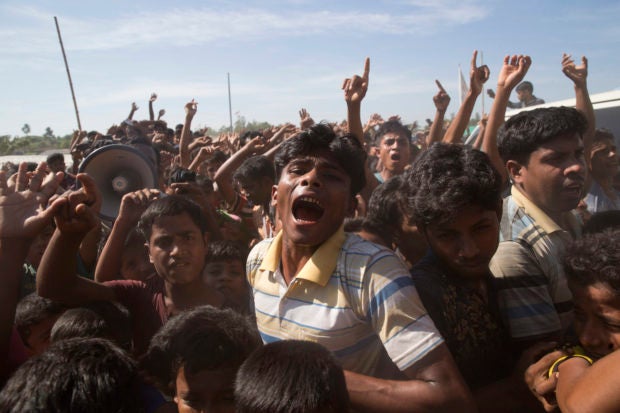 FILE – In this file photo dated Thursday, Nov. 15, 2018, Rohingya refugees shout slogans during a protest against the repatriation process at Unchiprang refugee camp near Cox’s Bazar, in Bangladesh. Sexual violence carried out by Myanmar’s security forces against the country’s Muslim Rohingya minority was so widespread and severe that it demonstrates intent to commit genocide as well as warrants prosecution for war crimes and crimes against humanity, according to a U.N. report released Thursday Aug. 22, 2019. The Rohingya refugees still live in squalid camps in Bangladesh, and a planned effort Thursday to repatriate an initial large group to Myanmar collapsed when none showed up to be taken back. (AP Photo/Dar Yasin, FILE)

The event comes days after Bangladesh attempted to start the repatriation of 3,450 Rohingya Muslims but none agreed to go back voluntarily.

On Sunday morning, more than 3,000 gathered at a playground in Kutupalong camp.

Read Next
Johnson seeks to push Trump at fractious G7
EDITORS' PICK
Nograles: Cabinet members to donate 75% of monthly salary to aid COVID-19 fight
10 Filipinos positive for COVID-19 in UK, 7 in Ireland — envoy
Diokno to Duterte: OK to make fun of buck tooth, but focus on people’s needs first
IATF to LGUs: Issue ordinances vs attacks on frontliners, COVID-19 patients
Robredo spox thanks Duterte for defending VP’s efforts vs COVID-19
Quick chat with Nicole Andersson: ‘You really don’t need much to be happy’
MOST READ
Coronavirus hotbed Rizal to shut borders on April 6
ADB warns PH against prolonged lockdown
Sotto on Isko Moreno’s call: We do our job without the media following our every move
Robredo spox thanks Duterte for defending VP’s efforts vs COVID-19
Don't miss out on the latest news and information.