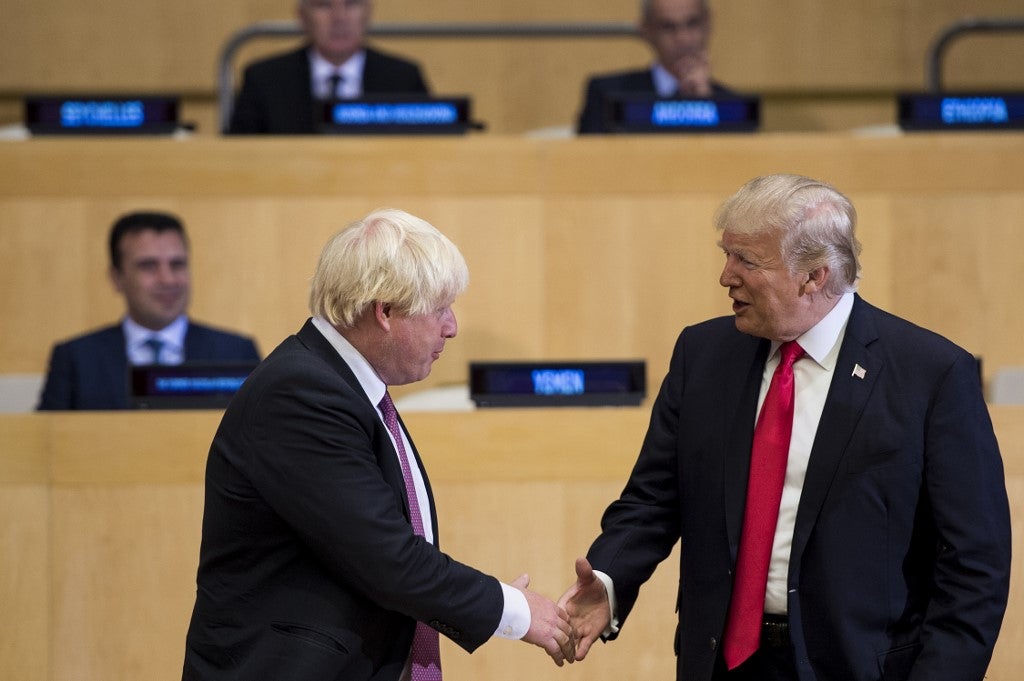 BIARRITZ, France — British Prime Minister Boris Johnson will on Sunday seek to persuade President Donald Trump to offer flexibility on trade and also win concessions from the EU on Brexit, at a G7 summit hosted by France marked by stark divisions.

Johnson was to hold his long-awaited first face-to-face meeting as premier with Trump in the southern French resort of Biarritz and also at midday talk with EU Council President Donald Tusk after a bitter verbal spat the day earlier.

Host President Emmanuel Macron wants to make the three-day meeting of the Group of Seven nations that started Saturday, an example for international forums but the first day was marked by EU leaders rounding on Trump on trade.

In a radical break from previous meetings of the elite club, there is to be no final statement haggled over in late night talks. Macron also invited several world leaders from outside the G7 such as India’s Narendra Modi and Egyptian President Abdel Fattah al-Sisi.

The Basque resort of Biarritz, which at this time of year usually teems with surfers, sunbathers and tourists, has been turned into a fortress for the event with over 13,000 police on duty and its gleaming beaches out of bounds to the public.

An anti-capitalism demonstration in nearby Bayonne turned ugly Saturday when the crowd of several hundred tried to get through police barricades and was repelled with water cannon and tear gas.

On Sunday, all eyes will be on Johnson as he makes his biggest international appearance since taking office in July on a pledge to deliver Britain’s exit from the European Union and return the self confidence of his nation.

In the lead-up to the talks, Johnson appeared at pains to distance himself from Trump after facing accusations in the past of being too cosy with the American leader.

He urged Trump to remove the “considerable barriers” for UK companies seeking to export to the American market, saying they risked impeding a free-trade deal after Brexit.

Johnson pointed to a string of UK products — ranging from shower trays to Britain’s beloved pork pies — that he said were not allowed on the American market.

“We intend to seize those opportunities but they are going to require our American friends to compromise and to open up their approach, because currently there are too many restrictions,” he said.

In another comment that could rile the Americans, he said that US digital giants like Facebook and Google needed to be taxed “fairly and properly” on their revenues. Johnson also sounded the alarm over Trump’s escalating trade struggle with China.

Johnson’s talks with Tusk later in the day could prove to be prickly after the pair exchanged barbs on Saturday over who would be to blame if Britain left the European Union without a deal.

“I still hope that Prime Minister Johnson will not like to go down in history as Mr ‘No Deal’,” Tusk told reporters in Biarritz.

Johnson retorted it was up to the EU to “get rid of” the so-called Irish backstop, a provision guaranteeing that border checks will not return between Ireland, an EU member, and Britain’s Northern Ireland.

G7 summits, gathering Britain, Canada, France, Germany, Italy, Japan and the United States, were once a meeting of like-minded allies. But they’ve become a diplomatic battlefield under Trump.

In an attempt to break the ice, Macron deployed the charms of French cuisine on Saturday, treating Trump to an unscheduled lunch as soon as he arrived on Air Force One.

Speaking to reporters in fluent English, Macron called Trump “a very special guest” and aides later said that the two men had found some common ground, notably on the Iran nuclear crisis.

G7 chiefs are also hoping to soothe tensions over Iran’s nuclear programme and persuade Trump to ease his policy of “maximum pressure”, for example by lifting sanctions on Iranian oil sales to China and India.

Macron is also pushing for action against fires in the Amazon rainforest, despite Brazilian right-wing President Jair Bolsonaro’s angry response to what he sees as outside interference.