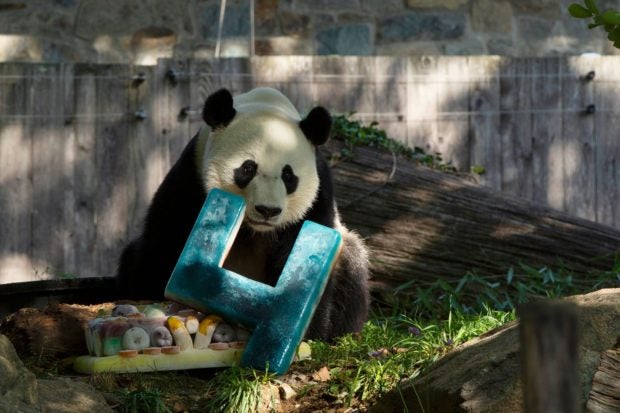 BREEDING AGREEMENT Giant panda Bei Bei will soon be leaving the Smithsonian Zoo in Washington for China in keeping with a US-China breeding agreement. He will leave his parents behind while two siblings will later be moved to China as well. —AFP

WASHINGTON — He didn’t blow out any candles, but the Washington National Zoo’s giant panda Bei Bei appeared to enjoy celebrating his fourth birthday on Thursday, his last before being shipped back to China.

The roly-poly black-and-white bear, one of the zoo’s star attractions, was treated to a colorful “panda-friendly” frozen cake made of fruit, carrots, sweet potatoes, sugarcane and bamboo, the zoo announced.

The birthday celebration for Bei Bei — his name is pronounced “Bay Bay” — could be viewed live thanks to the zoo’s “Panda Cam,” which broadcasts scenes of the 4-year-old and his siblings and parents from their enclosure round-the-clock.

Bei Bei will soon be returned to China, under terms of the agreement that brought him to the US zoo on loan. The same fate awaits his sister Bao Bao and their brother Tai Shan.

Their parents Mei Xiang and Tian Tian will remain in Washington at least until next year.

Under the loan agreement, the zoo pays China $500,000 a year to support conservation efforts there, and any panda cubs born at the zoo may stay until age 4, according to the Smithsonian website.

Zoo officials said they did not yet have an exact date for Bei Bei’s move, but said it would take place “in the coming months.”

Transporting such a large animal thousands of miles — Bei Bei weighs around 118 kilograms (260 pounds) — is no simple matter, they added.

It involves working with other federal agencies, researching travel logistics, coordinating with colleagues in China and preparing Bei Bei for the move.

The young panda’s name, which translates as “Precious,” was announced during a 2015 zoo visit by then first lady Michelle Obama and Peng Liyuan, the wife of Chinese leader Xi Jinping.