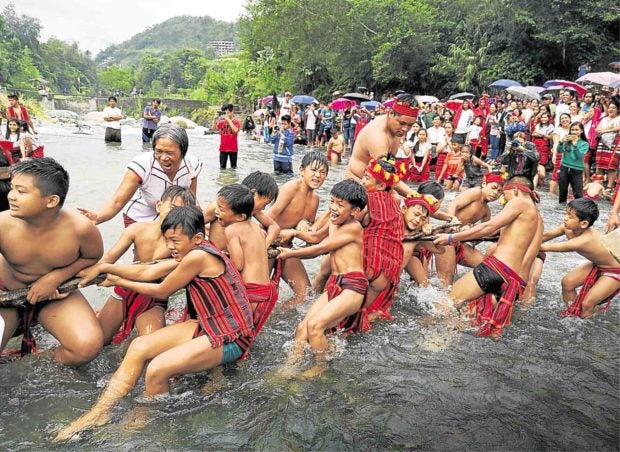 GAME TIME Egged on by their elders, boys in Hungduan town in Ifugao province compete in a game of tug-of-war in the community’s river in this year’s postharvest tugging ritual, “punnuk.” The tradition has been listed as an intangible cultural heritage by the United Nations Educational, Scientific and Cultural Organization. —PHOTOS BY EV ESPIRITU

HUNGDUAN, Ifugao, Philippines — At the break of dawn, the people of Barangay Hapao, Baang and Nungulunan donned their G-strings and traditional woven skirts, and trekked to the “nunhipukana” where the Hapao River and a tributary meet.

Men and women, old and young, chanted a four-line prayer (“Munggopah”) to “Daya” (sky), “Laud” (water) and “Bago” (earth), seeking blessings and imploring for the well-being of the farming community.

Then it was on.

As children and community guests watched from the riverbanks, their parents jumped into the water for “guyyudan,” a tugging game where the victors win a bountiful harvest in 2020.

The activities on Aug. 10 were part of this year’s “punnuk,” a traditional postharvest Ifugao ritual that was declared in 2015 by the United Nations Educational, Scientific and Cultural Organization (Unesco) as part of humanity’s intangible cultural heritage.

The tug-of-war was not a pointless struggle for men and women who pulled at “pakid” (wooden poles) with all their might. 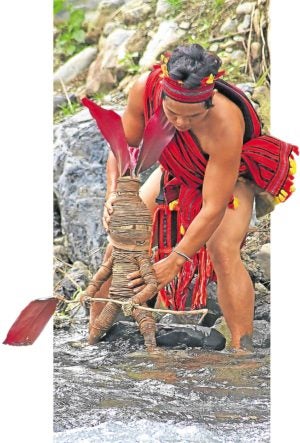 MAN OF STRAW This human figure made of dried rice straw and vine, called “kina-ag,” is what Hungduan villagers tug and compete for during “punnuk.”

The last harvest had not been good, after two irrigation canals at the rice terraces were damaged, leaving 3-inch cracks across the “payuh” (rice paddy), said Elena Uyammi, a 68-year-old “dumupag” (elder) who oversees traditional Hungduan farming.

“Our rice plants died. And the ‘tuping’ (stonewalls) eroded. Our ‘alang’ (palay storehouse) is usually full after harvest. Now, we have space that would have accommodated 30 percent more palay,” she said.

Because farmers could not wait for the government to allocate funds for repairs, they launched a “baddang,” which required families to contribute resources and manpower to fix the damaged terraces.

The Hungduan rice terraces are part of the cluster of Ifugao terraces listed as a World Heritage Site. But the terraces have also been included in Unesco’s endangered list as extreme weather, dwindling economic opportunities and an expanding disconnect between young Ifugaos and their land leave the terraces ill-maintained or abandoned.

Historically, the Ifugao life cycle is tied to the rice cycle of planting “tinawon” (an heirloom rice variety). The affinity of community members with nature is displayed by the natural irrigation and engineered water-preservation techniques of the terraces, which their ancestors carved from the mountains hundreds of years ago.

To this day, Hungduan remains a key supplier of tinawon, a profitable export commodity, said Cameron Odsey, Cordillera director of the Department of Agriculture. Tinawon has also found a market in health food afficionados, he said. 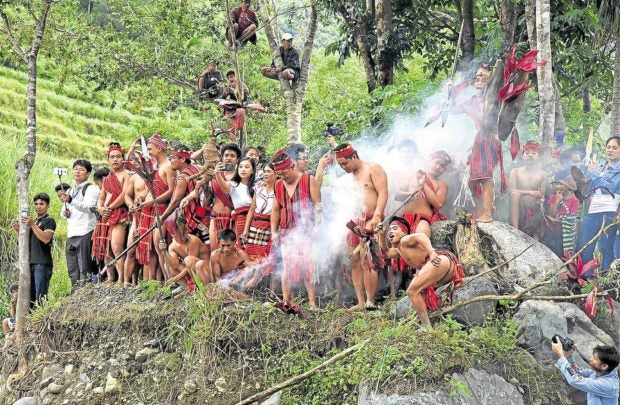 CHEERING SQUAD Visitors and residents of the villages of Hapao, Baang and Nungulunan in Hungduan take their spots along riverbanks to cheer for their teams and family members as they compete in traditional games.

“We plant tinawon, but it’s a variety that’s hard to grow. We harvested 20 ‘cavans’ of minangan, which were not enough because of the damaged irrigation,” Mahiwo said.

Some farmers have tried to adjust by planting vegetables like cabbage, carrot and lettuce on terraces near the border of Benguet province.

Rituals have also helped prevent pests from destroying crops. Uyammi directed farmers to start preparing rice seedlings on Nov. 15, which the dumupag perceived as the best time for the next planting cycle.

“But some farmers started three weeks earlier. They stopped listening to the dumupag,” Uyammi said.

There is a reason farmers have to start planting simultaneously at certain periods of the year. “It confuses the rats,” Uyammi said.

The government has not been remiss in maintaining the World Heritage Site, which includes the terraces at Batad and Bangaan in Banaue town, at Nagacadan in Kiangan town and in Mayoyao town, said Ifugao Gov. Jerry Dalipog.

A former Banaue mayor, Dalipog said the schemes used in restoring damaged terraces at his hometown would be the model for rehabilitating the rest of the terraces.

Projects worth over P250 million sourced from public and private sectors were poured into the rice terraces in Banaue from 2016 to 2019, including P109 million from the national budget that financed works of the Department of Public Works and Highways. 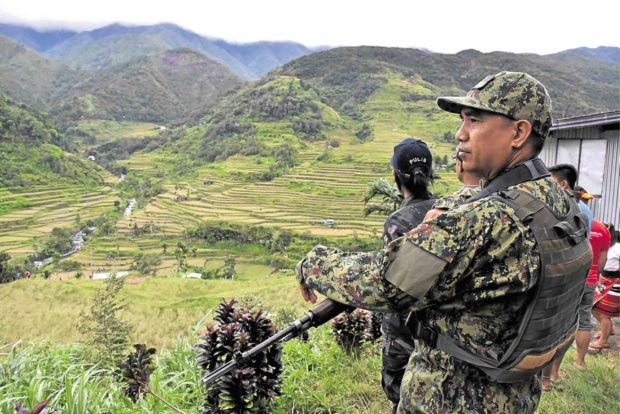 ENSURING ORDER Policemen ensure peace and order during the rice harvest ritual staged by communities that have become guardians of Hungduan’s rice terraces.

As much as P60 million was used to repair the terraces of Batad and Bangaan, while P11 million from the Tourism Infrastructure and Enterprise Zone Authority was used for “trail development.”

The terraces are also among the core areas targeted by a P4.125-billion conservation and development plan drawn up by the National Anti-Poverty Commission.

The plan will help make the terraces sustainable “through indigenous knowledge systems and practices” so residents there have food security by 2030.

Punnuk had virtually disappeared until it was revived by Lopez Nauyac, a Hapao resident, in 1997.

“We are forced to find other ways to pass down our culture and traditions because they are no longer performed,” Kalaw said. 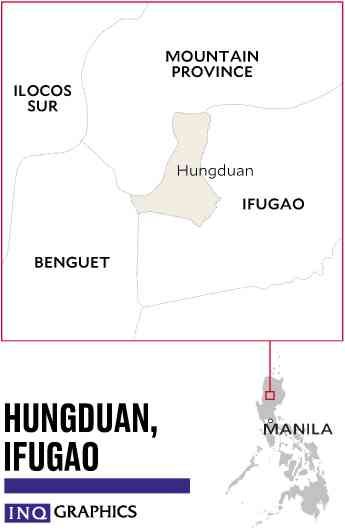 Read Next
THIS WEEK’S FESTIVALS: Aug. 25-31, 2019
EDITORS' PICK
Geek out at TOYCON 2022 powered by Smart Signature
UK’s Boris Johnson will resign, BBC reports
High inflation: Your P1 is now worth only 87 centavos
High-risk pregnancy: Reducing your risk is in your hands
Unemployment rate up to 6% in May
House energy committee chair Arroyo bats for cheap electricity
MOST READ
Suspect in grisly killing of missing woman in Bulacan arrested
Kim Atienza’s daughter flaunts bikini body in response to critics of her ‘revealing photos’
Cop slain in Isabela ambush
FDA probes popular Filipino noodle brand for ‘high level of ethylene oxide’
Don't miss out on the latest news and information.