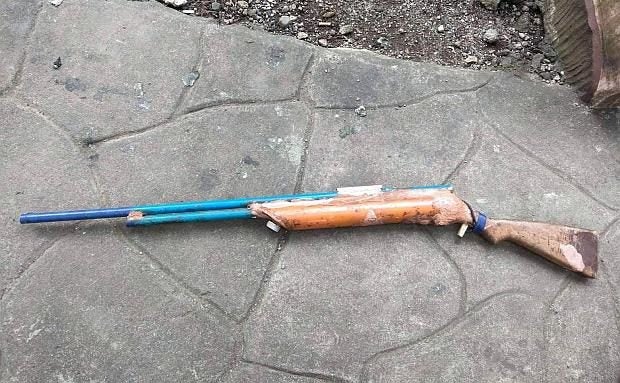 A boy was playing with this “holen” rifle with which he accidentally killed his 5-year-old cousin in Parang, Maguindanao. (Photo from Parang Municipal Police Station)

PARANG, Maguindanao, Philippines — Lt. Col. Ebrahim Jambiran, the police chief of this town, warned residents against possession and use of home-made rifles using marbles as bullets after a 5-year-old boy was killed in a freak accident involving the said weapon.

Jambiran said the so-called ‘holen’ rifles could be dangerous as shown by an incident that happened last Thursday, Aug. 22, in Barangay Gumagadong-Calawag.

The boy playfully poked a holen rifle at the end of his cousin, a 5-year-old boy, not noticing that it was loaded.

He accidentally squeezed its trigger, pumping a marble into the boy’s head.

The boy was rushed to a hospital in Cotabato City, where he declared dead on arrival.

The other boy, a cousin of the victim, was turned over to the custody of Parang Municipal Social Welfare Office for psycho-social intervention.

Jambiran added that the police are determining the owner of the rifle.

A holen rifle is made of wood with a PVC pipe as its barrel. It’s powered by alcohol and uses marbles as bullets.

Many villagers in Maguindanao use it for hunting birds and shooing away monkeys and wild boars that destroy their crops.