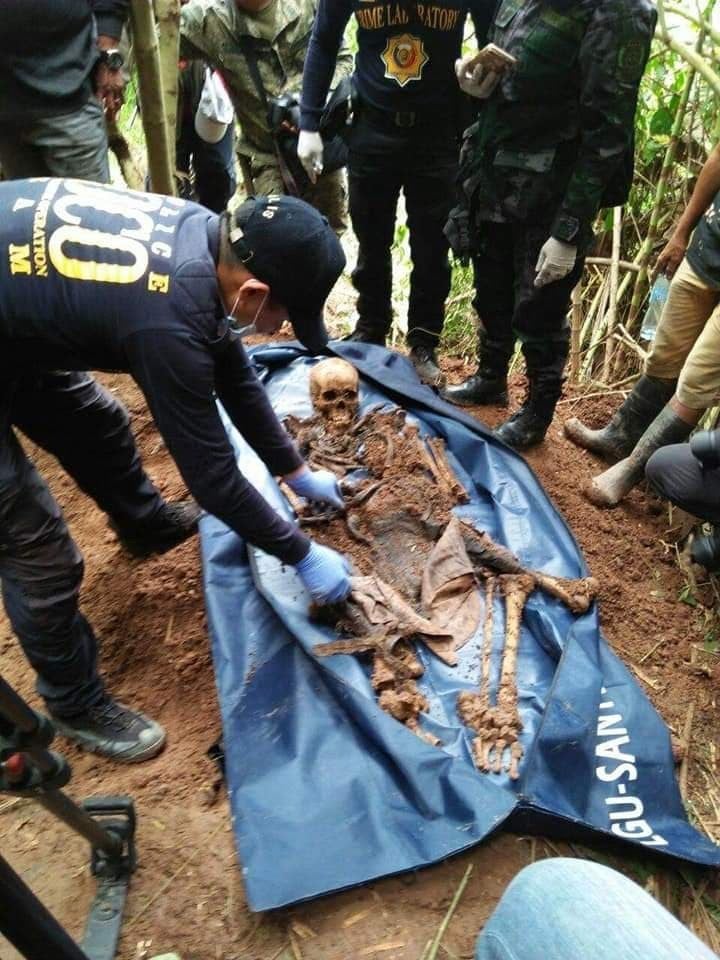 Scene of the Crime Operatives examine the remains of one of the three victims buried in Barangay Digongan, Kitaotao, Bukidnon, believed to be summarily executed by the New Peoaple’s Army. The burial site was found on Thursday, Aug. 22. (Photo courtesy of the Philippine Army’s Eastern Mindanao Command)

CAGAYAN DE ORO CITY –– The Northern Mindanao police chief, Brigadier General Rafael Santiago Jr., has ordered a deeper investigation on the killing of four persons in Bukidnon whose remains were dug up in separate graves on August 22.

Lt. Col. Mardy Hortillosa, regional police spokesperson, said the police stations in San Fernando and Kitaotao towns were told to establish the identities of the killers so they could be brought before the courts to answer for the crime.

According to Col. Roel Lamiing, Bukidnon provincial police chief, information provided to them pointed to the New People’s Army (NPA) as the culprit, but they were working on identifying the individuals who carried out the killings.

Lamiing said they have so far invited potential witnesses who can give testimonies.

According to a report of the Army’s 4th Infantry Division (4ID), the exhumed remains in Barangay Digongan, Kitaotao were those of Joel Rey Galendez, a retired policeman; Dionisio Havana, a tribal leader in San Francisco, Agusan del Sur; and Army Technical Sergeant Reynante España.

The three were said to have been taken captive by NPA fighters when they blocked the road in Kalagangan, San Fernando on Aug. 22, 2017.

Several months later, they were killed and buried in the Kitaotao graves, the Army report said.

A fourth grave was located in Barangay Matupi, San Fernando where, according to police, the remains of Remon Manoos was found.

Lamiing said Manoos was a former NPA guerrilla who surrendered to the Army. Then 24 years old, he was killed on January 28, 2019, when former comrades discovered about his surrender.

Captain Jose Regner Sevilleno, Kitaotao municipal police chief, said DNA samples have been sent to the police crime laboratory in Manila to confirm the identities of those killed.

Lamiing is anticipating the disclosure of more information that could lead to similar graves in Bukidnon.

Last month, soldiers and cops dug up the remains of a former communist guerrilla buried in Pangantucan town. The grave of Merlyn Panta, whom the military said was killed on suspicion of being a government spy, was revealed by a former rebel./lzb