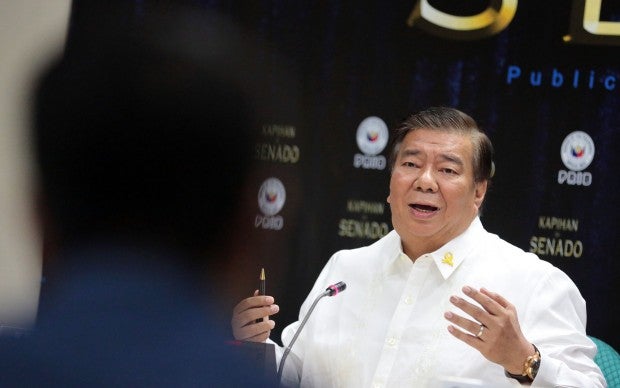 MANILA, Philippines — Senate Minority Leader Franklin Drilon has called for an investigation into the present status of Calauan Mayor Antonio Sanchez’s bodyguards also convicted in the rape-slay of Eileen Sarmenta  and murder of Allan Gomez.

Drilon said this as he urged the Senate to pursue the proposal to investigate convicted rapist-murderer former Calauan, Laguna Mayor Antonio Sanchez’s eligibility to benefit from the Republic Act 10592 or the Good Conduct Time Allowance (GCTA).

Under Art. 94 of the Revised Penal Code, as amended by RA 10592, “criminal liability is extinguished partially for good conduct allowances which the culprit may earn while he is undergoing preventive imprisonment or service sentence.”

UPLB student Sarmenta was given as a “gift” to Sanchez. Sanchez’s aides Aurelio Centeno and Vivencio Malabanan, who turned witnesses, testified that after the former mayor raped the student, Sarmenta was passed on to the ex-mayor’s bodyguards who took turns in raping her.

In 1995, Sanchez was convicted along with his bodyguards Baldwin Brion, Luis and Rogelio Corcolon, George Medialdea, Zoilo Ama and Pepito Kawit.

Drilon also urged that the Senate probe should investigate the eligibility of some 10,000 detainees who could also be set for an early release in prison.

Drilon’s statement came after Justice Menardo Guevarra announced that Sanchez along with over 10,000 inmates will benefit from the GCTA which gives additional time to be deducted from an inmate’s prison sentence as a reward for his or her good behavior.

Just days later, the Department of Justice and Bureau of Corrections declared that Sanchez is not qualified for the GCTA and will not walk out of jail soon.