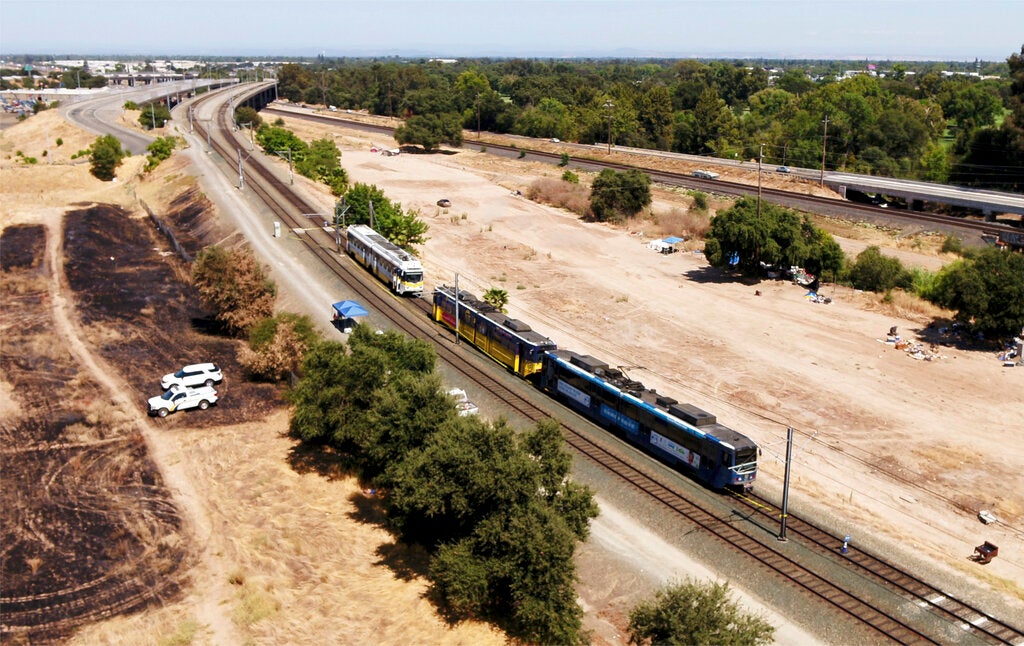 This drone photo shows a maintenance car, left, and a two-car passenger train stopped at the site of their collision near Sacramento Regional Transit ‘s main maintenance yard, Friday, Aug. 23, 2019, in north Sacramento, California. (The Sacramento Bee via AP)

The accident occurred around 9:40 p.m. Thursday and was initially believed to be a derailment, but Sacramento Regional Transit spokeswoman Devra Selenis confirmed Friday that it was a crash.

The maintenance train was not moving at the time, Selenis said in an email to The Associated Press.

“It’s currently under investigation to determine the cause,” she said.

There were 24 people on the Blue Line passenger train and three on the maintenance train.

Thirteen people were taken to hospitals, one with moderate injuries and 12 with minor injuries, Selenis said.

Sacramento Fire Department spokesman Keith Wade said 14 other people were treated at the scene and released.

“We’re very happy that no one lost their life and that no one was in critical condition,” Wade told reporters late Thursday.

Wade said there were early reports of a derailment and other reports of a collision, but he noted that the passenger train was upright and appeared to remain on the tracks.

“I have no information in regards to exactly what occurred,” he said.

The National Transportation Safety Board said it was sending a six-person team to investigate the crash.

The Sacramento Bee reported that the crash occurred in a dark and isolated area.

Nearby resident Anthony Hernandez told CBS Sacramento he heard the collision while he was putting his kids to bed.

“It rattled the houses,” Hernandez said.

Buses were being used Friday to carry rail passengers around the accident site.