Candidate: Michigan city should be as white ‘as possible’ 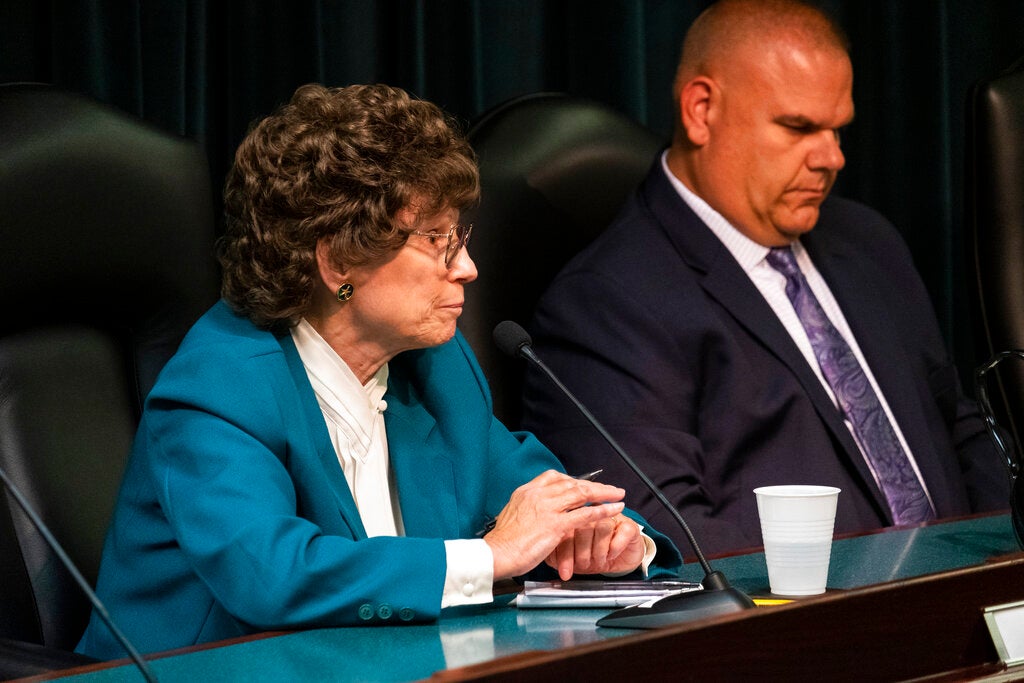 Jean Cramer, a candidate for the Marysville City Council, gives her opening remarks during a candidate forum Thursday, Aug. 22, 2019, at Marysville, Michigan, City Hall. Cramer shocked the public forum when she said she wants to keep her community white “as much as possible.” (The Times Herald via AP)

MARYSVILLE, Michigan — A city council candidate in Michigan said Friday she has no plans to end her campaign after shocking a public forum when she said she wants to keep her community white “as much as possible.”

Jean Cramer made the comment Thursday in response to a question about diversity in Marysville, a city in St. Clair County, 55 miles (88 kilometers) northeast of Detroit. The Times Herald in Port Huron said she’s one of five candidates running for three council seats in November.

During a follow-up interview Friday outside her Marysville home, Cramer doubled down on her statements. She said if there is a biracial marriage in their family, she could understand why her stance might upset her neighbors.

“Because those people don’t know the other side of it,” she said. “For whatever reason, I’ve heard, they love each other, whatever, but there’s also such a thing as remaining single. People don’t necessarily have to get married, and, if they love somebody, love them single. There’s nothing wrong with that.”

Cramer, 67, contends the bible backs her beliefs and asserts she doesn’t believe she is a racist, despite the condemnation of her views.

Cramer made her comments about keep Marysville as white as possible Thursday after the moderator asked candidates if the city should do more to attract foreign-born residents.

“Keep Marysville a white community as much as possible,” she replied. “White. Seriously. In other words, no foreign-born, no foreign people.”

The Times-Herald later asked Cramer if she wanted to clarify her remarks.

“Husband and wife need to be the same race. Same thing with kids,” she said. “That’s how it’s been from the beginning of, how can I say, when God created the heaven and the earth. He created Adam and Eve at the same time. But as far as me being against blacks, no I’m not.”

Mayor Dan Damman and other local leaders have called for her withdrawal from the race.

“I would say that I probably came to the conclusion this morning,” Damman said Friday. “After the initial shock of what she said really sank in and (given) the deep-seated viewpoints that she has, I don’t believe that she is fit to serve as an elected official in Marysville or anywhere else.”

Other candidates at the forum were deeply troubled. Mike Deising said: “Just checking the calendar here and making sure it’s still 2019.”

Council member Paul Wessel said anyone who makes it to Marysville should be allowed to live there. The council meeting room is named for the late Joseph Johns, who was Syrian, owned a local business and was an elected official for decades. He was the father of Mayor Pro Tem Kathy Hayman.

“I don’t even know that I can talk yet, I’m so upset and shocked. … So basically, what you’ve said is that my father and his family had no business to be in this community,” Hayman told Cramer.