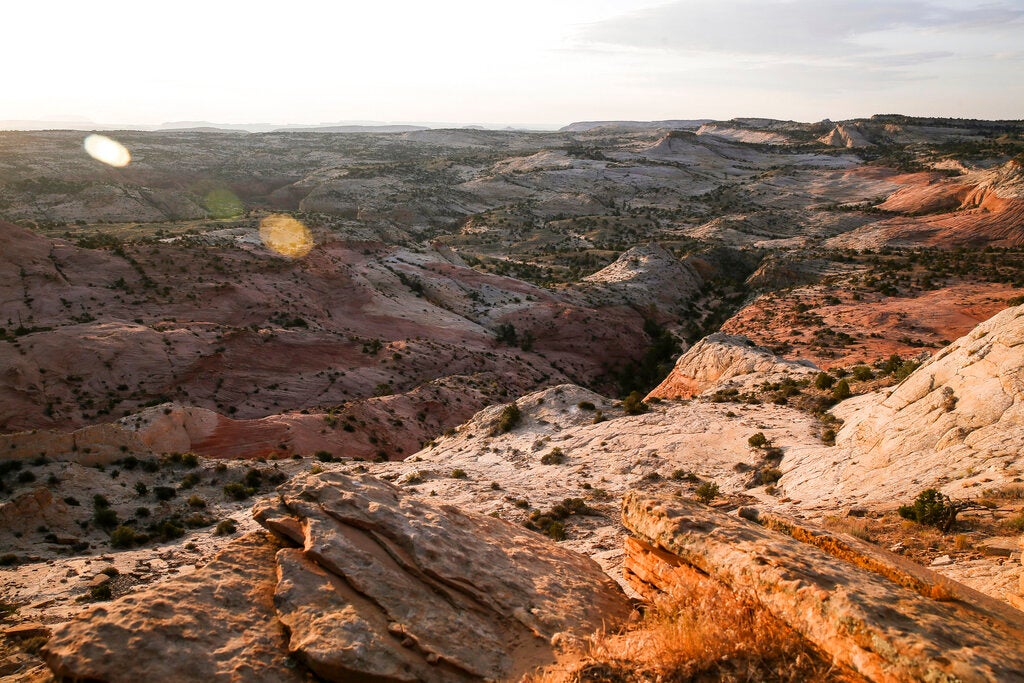 This July 9, 2017 file photo, shows a view of Grand Staircase-Escalante National Monument in Utah. (The Deseret News via AP)

SALT LAKE CITY — A new U.S. government management plan unveiled Friday clears the way for coal mining and oil and gas drilling on land that used to be off limits as part of a sprawling national monument in Utah before President Donald Trump downsized the protected area two years ago.

The plan released by the Bureau of Land Management would also open more lands to cattle grazing and recreation and acknowledges there could be “adverse effects” on land and resources in the monument.

But while allowing more activities, the plan would also add a few safeguards for the cliffs, canyons, waterfalls and arches still inside Grand Staircase-Escalante National Monument that weren’t in a proposed plan issued last year.

Among them are opening fewer acres to ATVs and cancelling a plan that would have allowed people to collect some non-dinosaur fossils in certain areas.

Harry Barber, acting manager of the national monument, told The Associated Press the plan reflects changes made after considering input from the public and considering an assessment that there are enough protections already in place.

The plan is expected to go into effect after a public review period.

The monument has seen a 63% increase in visitors over the past decade, hosting 1.1 million people from October 2017 through September 2018, according to U.S. government figures.

Conservation and paleontology groups have filed ongoing lawsuits to stop the downsizing.

They say the new plan lacks adequate protections for the land and reiterated their concern that the years spent creating the plan were a waste of taxpayer resources because the lawsuits remain unresolved.

Steve Bloch, legal director at the Southern Utah Wilderness Alliance conservation group, said it’s unforgivable to cut the monument in half and downgrade the excluded lands to what he calls “garden variety public lands.”

“Grand Staircase-Escalante is one of the nation’s public land crown jewels and from the outset the Trump administration was hell-bent on destroying this place,” Bloch said.

The allowance for coal, oil and gas extraction on the lands cut was expected as the Trump administration carried out a “reckless” plan to undo protections on pristine lands, said Heidi McIntosh, managing attorney of Earthjustice’s Rocky Mountains office.

“First, they ripped in half and now they are officially opening the door to all kinds of destructive activities,” she said. “It’s really a giveaway to the fossil fuel industry.”

Barber stressed that protections will remain even though the lands are no longer within the monument.

“It’s not a free-for-all,” Barber said. “That seems to be what I hear a lot, people feeling like now anybody can go out and do anything they want to do on these lands. But, they need to realize that we still have our rules and policies.”

Barber said he’s excited that competitive events would be allowed in the monument under the BLM plan. A popular trail running race called the Grand to Grand Ultra has wanted to extend its course through parts of the monument and will now be able to seek permission, he said.

President Bill Clinton created the monument in 1996 using the Antiquities Act, which sets guidelines calling for the “smallest area compatible with proper care and management” of artifacts to be protected.

Trump cut the size of Grand Staircase-Escalante amid a review of 27 national monuments by then-Interior Secretary Ryan Zinke. Trump also downsized Bears Ears National Monument in Utah by about 85%.

Trump said scaling back the two monuments reversed federal overreach. The move earned cheers from Republican leaders in Utah who lobbied him to undo protections by Democratic presidents that they considered overly broad.

David Polly, a paleontologist at Indiana University and past president of the Society of Vertebrate Paleontology, said he’s relieved no fossil collection will be allowed inside the monument but he’s worried that allowing people to take non-dinosaur fossils in the lands cut from the monument could lead to problems.

Some items such as petrified wood can be hard to distinguish from dinosaur bones, he said.

“It may be accidentally encouraging people to end up breaking the rules,” Polly said.