AP Explains: The causes and risks of the Amazon fires | Inquirer News

AP Explains: The causes and risks of the Amazon fires 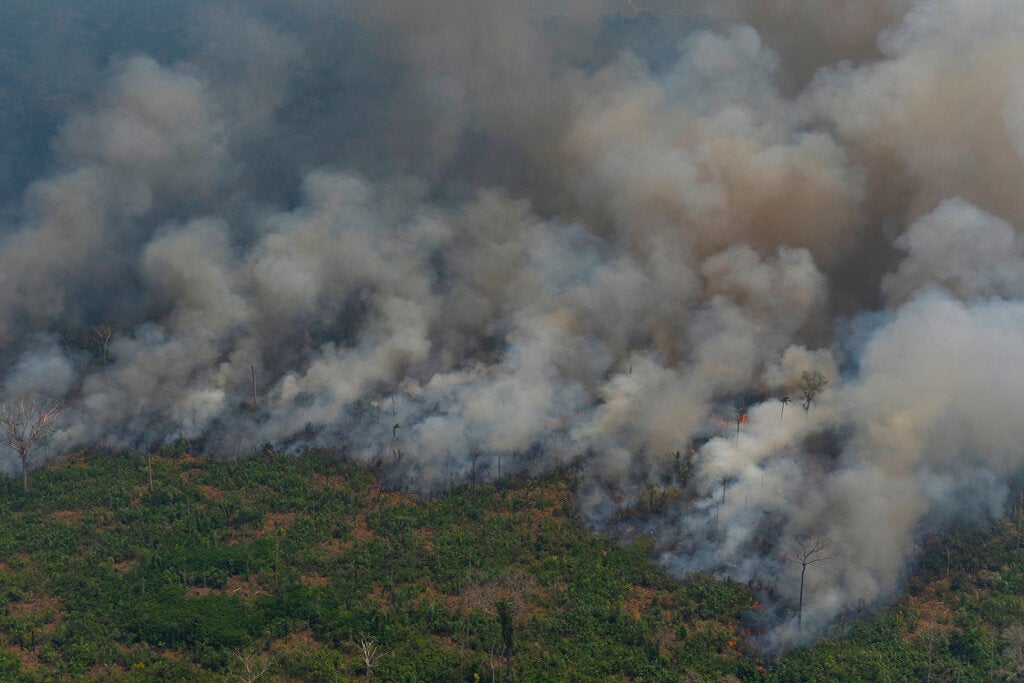 Wildfires consume an area near Porto Velho, Brazil, Friday, Aug. 23, 2019. Brazilian state experts have reported a record of nearly 77,000 wildfires across the country so far this year, up 85% over the same period in 2018. Brazil contains about 60% of the Amazon rainforest, whose degradation could have severe consequences for global climate and rainfall. (AP)

RIO DE JANEIRO — Fires have been breaking out at an unusual pace in Brazil this year, causing global alarm over deforestation in the Amazon region. The world’s largest rainforest is often called the “lungs of the earth.” Here’s a look at what’s happening:

Brazil’s National Space Research Institute, which monitors deforestation, has recorded 76,720 wildfires across the country this year, as of Thursday. That’s an 85% rise over last year’s figure. And a little over half of those, 40,341, have been spotted in the Amazon region.

The agency says it doesn’t have figures for the area burned, but deforestation as a whole has accelerated in the Amazon this year. The institute’s preliminary figures show 3,571 square miles (9,250 square kilometers) of forest — an area about the size of Yellowstone National Park — were lost between Jan. 1 and Aug. 1. That already outstrips the full-year figure for 2018 of 2,910 square miles (7,537 square kilometers).

Stricter enforcement of environmental laws between 2004 and 2014 had sharply curbed the rate of deforestation, which peaked in the early 2000s at about 9,650 square miles a year (25,000 square kilometers).

Meanwhile, large fires also have been burning in neighboring countries such as Bolivia, Paraguay and Argentina.

Paulo Moutinho, co-founder of the Amazon Environmental Research Institute, said this week that “it is very difficult to have natural fires in the Amazon; it happens but the majority come from the hand of humans.”

Moutinho, who has been working in the Amazon forests for nearly 30 years, said fires are mostly set to clear land for farming, ranching or logging, and they can easily get out of control, especially during the July-November dry season. Moutinho says this year hasn’t been especially dry. “We’re lucky. If we had had droughts like in the past four years, this would be even worse.”

Critics of Brazilian President Jair Bolsonaro say ranching and mining interests eager to expand their holdings have been emboldened by his oft-stated desire to increase development in the region.

How important is the Amazon?

The world’s largest rainforest, ten times the size of Texas, is often called the “lungs of the earth,” and 60% of it lies within Brazil.

Trees store carbon absorbed from the atmosphere, and the Amazon each year takes in as much as 2 billion tons of carbon dioxide — a greenhouse gas that contributes to global warming.

The Amazon’s billions of trees also release water vapor that forms a thick mist over the rainforest canopy. It rises into clouds and produces rain, affecting weather patterns across South America and far beyond.

It’s also home to an estimated 20% of the earth’s plant species, many of which are found nowhere else.

“With each hectare burned we could be losing a plant or animal species that we didn’t even know about,” said Andre Guimaraes, director of the Amazon Environmental Research Institute.

What is ‘the tipping point?’

Climate scientist Carlos Nobre of the University of Sao Paulo and Thomas Lovejoy, an environmental scientist at George Mason University, have estimated that the “tipping point for the Amazon system” is 20% to 25% deforestation. Without enough trees to create the rainfall needed by the forest, the longer and more pronounced dry season could turn more than half of the rainforest into a tropical savannah, they wrote last year in the journal Science Advances.

If the rainfall cycle collapses, winter droughts in parts of Brazil, Uruguay, Paraguay, and Argentina could devastate agriculture, they wrote. The impacts may even be felt as far away as the American Midwest, according to Bill Laurance, a tropical ecologist at James Cook University in Cairns, Australia.

Lovejoy said Friday that close to 20% of the Amazon already has been deforested.

“I worry that the current deforestation will push past the tipping point leading to massive loss of forest and biodiversity,” he said. 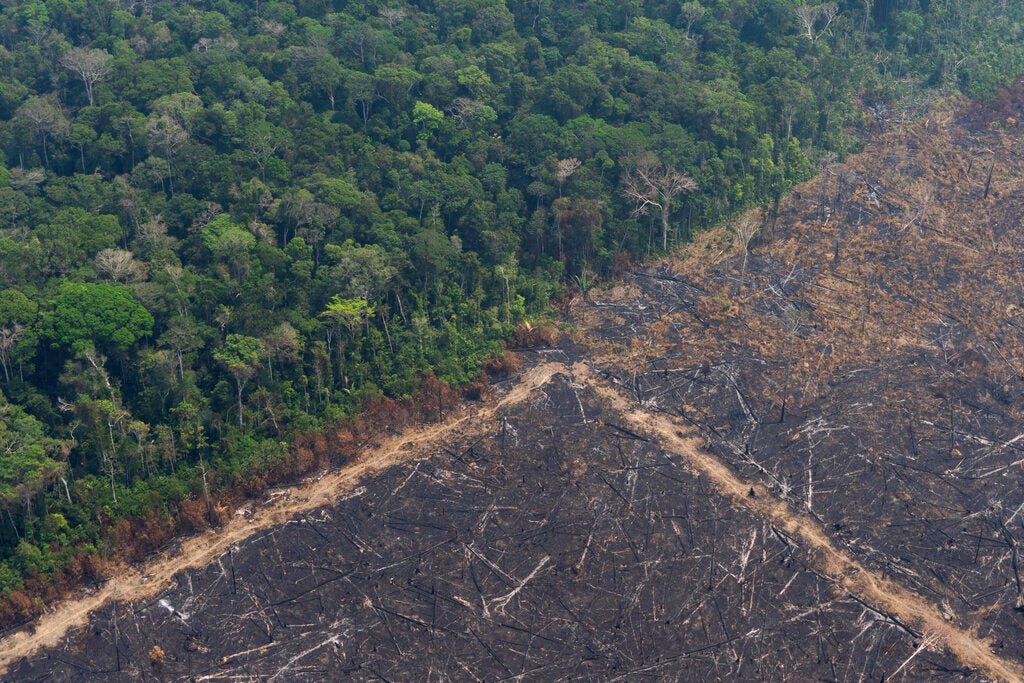 Virgin jungle stands next to an area that was burnt recently near Porto Velho, Brazil, Friday, Aug. 23, 2019. (AP)

Lovejoy also said that the government has proposed infrastructure projects “which would push yet further beyond and accelerate the dieback. It will add to the climate change challenge, massive loss of biodiversity and all that means in foregone human health and economic benefit.”

Bolsonaro took office on Jan. 1 after campaigning on promises to loosen protections for indigenous lands and nature reserves, arguing that they were helping choke Brazil’s now-struggling economy by stifling its major agricultural and mining sectors.

He has expressed a desire to protect the environment, “but without creating difficulties for our progress.”

Bolsonaro has also feuded with non-governmental groups and foreign governments, including Germany and France, which have demanded Brazil do more to protect the Amazon. Bolsonaro calls it meddling by people who should improve the environment in their own countries. This week he even suggested, without evidence, that a non-governmental organization or activists could be setting fires to make him look bad.

He has disputed figures released by the space research institute, and the agency’s head recently was forced out after defending the figures.