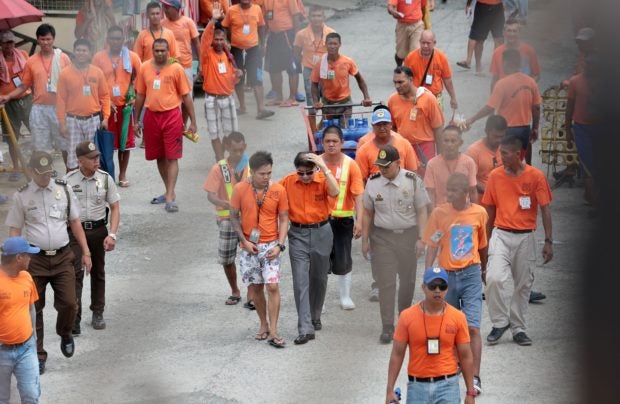 President Duterte is strongly against the release of convicted rapist and murderer Antonio Sanchez, a former mayor of Calauan, Laguna province, who was sentenced to serve a total of nine 40-year prison terms in two separate cases, according to Sen. Christopher Lawrence “Bong” Go.

“He’s not in favor. As a lawyer, [the President] believes [Sanchez] is not qualified [to be granted with good conduct time allowance],” Go told the Inquirer in a Viber message on Friday.

He was referring to Republic Act No. 10592 passed in 2013 which credits good behavior to shave time off a convict’s prison term.

Asked if Mr. Duterte had relayed this to Justice Secretary Menardo Guevarra and Bureau of Corrections (BuCor) chief Nicanor Faeldon, Go replied: “That I do not know.”

In a text message to other reporters, Go said the President was enraged at the prospect of Sanchez’s early release.

“I can’t speak in behalf of the President, but when I talked with the President he was furious and he said he also was not in favor [of Sanchez’s release], and he cited some other laws … In short, he is opposed. He was angry,” Go said.

In March 1995, Sanchez and six of his aides were convicted of the rape and murder of Eileen Sarmenta and the murder of her friend Allan Gomez, both students of the University of the Philippines Los Baños in 1993. They were sentenced to seven reclusion perpetua, each equivalent to 40 years.

The following year, Sanchez was convicted of double murder in a separate case and sentenced to two reclusion perpetua.

The Penal Code says a person may only be held behind bars for a maximum of 40 years even with multiple convictions.

Presidential spokesperson Salvador Panelo said he was not surprised by the President’s anger and opposition to Sanchez’s release under the good conduct law.

“Why? Because the law is very categorical that those convicted of heinous crimes, among others, are disqualified. They’re not within the coverage of RA 10592,” Panelo said.

“He would be angry because if the law says he’s disqualified, why would you even consider him [Sanchez]?” he added.

When first asked about Sanchez’s possible early release, Guevarra on Tuesday said, “He may actually be released already.”

He later said that the BuCor was still computing how many years may be deducted from the ex-mayor’s jail time.

Finally on Thursday, amid public outrage over Sanchez’s possible early freedom and citing a provision of the law excluding prisoners convicted of heinous crimes, Guevarra said the rape-murder convict was not illegible for good conduct time allowance (GCTA).

Panelo said Malacañang supported the directive of the Department of Justice (DOJ) to BuCor “to carefully and cautiously review the GCTA of persons who have been found guilty by the courts of having committed high profile, heinous crimes or crimes so grave that show extreme moral depravity.”

“It appears to me that Guevarra’s premature announcement was a trial balloon of some sort, but which was immediately burst by an enraged public,” De Lima said in a statement.

“Maybe it was precisely to enrage the public, and to garner public support for the death penalty, that Guevarra announced Sanchez’s impending release,” she said.

Justice Undersecretary Mark Perete, the DOJ spokesperson, dismissed her allegations as “unfounded and purely imagined accusations of some ‘insidious agenda’ in the public discourse which transpired as regards the GCTA implementation.”

About 200 protesters, mostly women and Upsilon Sigma Phi fraternity brothers of Gomez, gathered outside the DOJ offices in Manila to oppose the release of Sanchez.

“It is an injustice and a heavy slap on the face of the many who fought hard 26 years ago to put a man in a position of power like Sanchez behind bars, and the many still who are fighting now to keep him there,” Gabriela secretary general Joms Salvador said in a statement.

Allowing convicted rapist-murderers to walk free while student activists and government critics face jail time under the Duterte administration was a “distortion of justice,” she said.

According to the Center for Women’s Resources, more than 500 political prisoners, 120 of whom are seniors, are still “languishing in jail only because of their political conviction.”

Also on Friday, Supreme Court public information officer Brian Keith Hosaka clarified that the tribunal’s June 2019 ruling on the implementing rules and regulations of RA 10592 was intended to make the law applicable also to prisoners sentenced before it was passed in 2013.

“In deciding the case, the court applied the fundamental doctrine in criminal law that penal laws, when favorable and advantageous to the accused, should be applied retroactively,” he said.

Guevarra said he has requested Faeldon to be “very clear” about the guidelines to assess good conduct because they did not seem to be “very orderly.”

He noted that the discretion by the BuCor chief and the prison warden to grant GCTA was “quite subjective.”

“It’s difficult if it’s subjective because that is prone to corruption,” he said.

Undersecretary Deo Marco, acting chair of the Board of Pardons and Parole, said that “as part of our supervisory power, we can take a look at the rules again to firm it up for future use.”

The Integrated Bar of the Philippines (IBP) in a statement on Thursday called for more transparency in the government’s enforcement of RA 10592.

“We suggest that the basis for and evaluation of ‘good conduct’ and the computation of shortened imprisonment be made more transparent,” the IBP said. “The doubts, fears and perhaps the reality that our penal system is flawed or corrupted must be decisively addressed.”

“A simple math mistake can directly perpetuate wholesale injustice. Every number in the computation has great implication. An error can be a criminal’s ticket to freedom,” she said. “It’s hard to imagine hardened criminals walk free without fully serving their life sentences just because of a clerical lapse and because there’s (GCTA).” —WITH REPORTS FROM JEROME ANING AND MARIEJO S. RAMOS