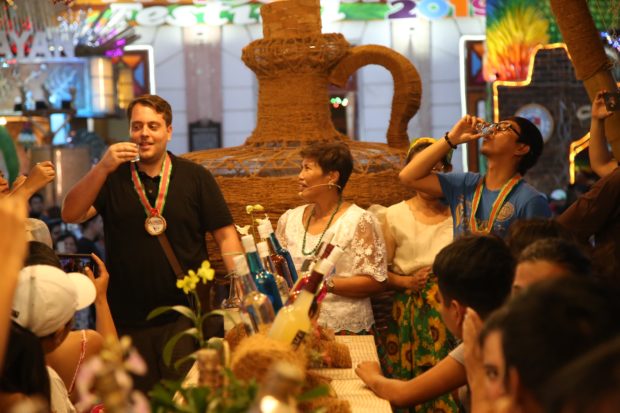 SPIRITED WELCOME Guests and tourists get a fiery welcome with shots of “lambanog” (coco gin) during the ongoing Niyogyugan Festival in Quezon, where the “tagayan” ritual is being revived. The traditional rite has participants downing a shot of lambanog in several rounds amid much singing and teasing to tighten bonds of friendship, chivalry and romance. —DELFIN T. MALLARI JR.

At the center of the 11-day festival that ends on Aug. 26 is the celebratory tagayan ritual, done this year inside a coconut-inspired pavilion in front of the provincial capitol and Perez Park in this city.

The host distributes shot glasses with lambanog to each guest, Decal explained. Raising his glass, the host then offers a toast with the words, “Na’ay po! (Here it is!)” before downing his drink in one gulp.

The guest then responds with a “Pakinabangan po! (Make use of it, enjoy)” as he raises and empties his own glass.

The tagayan ritual is “the warmest way of welcoming guests” in Quezon, Decal said. “It shows how Filipinos are gentle drinkers who, while immersed in the ritual, give respect to the other while tightening bonds of friendship, chivalry and romance.”

Between swigs of lambanog, deals are sealed and covenants closed, often accompanied by native music and dance, Decal said. After all, “tagay means a drinking song,” she explained.

In a group drinking session, a tanggero keeps tabs on the rounds consumed by each participant, making sure everyone gets his share of the drink and duly finishes it.

When women drinkers join in, the ritual assumes a more jovial character amid good-natured teasing and mock heckling from the menfolk.

“The tagayan is a great experience,” said Eriberto Ricardo Dedace, a tourist guide, storyteller and heritage conservationist from Sariaya town. “It is a window to the soul and hospitable nature of the good, gracious and polite Quezon locals,” he added.

But it is now a vanishing tradition, Decal said, which the Niyogyugan Festival hopes to revive for the younger generation to appreciate. “Hopefully, it will be part of our living tradition again,” she said.

To keep the ritual alive, Decal has trained a group of people to become “ambassadors of the tagayan” and serve as tanggero and tanggera to help her demonstrate every facet of the rite.

In this year’s festival, aptly named after the province’s plentiful harvest of coconuts (niyog) and the expected merrymaking (yugyog, or moving to a fast beat), tourists gamely joined the tagayan ritual amid the fiesta-like atmosphere.

First held in 2012, the Niyogyugan Festival was conceptualized by Quezon Rep. Aleta Suarez to highlight the importance of the coconut to the province’s history, economy and way of life.

The annual celebration hopes to contribute to the cultural and historical development of Quezon, while promoting tourism and local coconut products.

Drawing participants from the province’s 39 towns and two cities, it not only highlights the coconut industry but also provides a venue for farmers and entrepreneurs.

Quezon has always been known for its lambanog, a local gin made from the sap of the coconut flower. Also known as tuba, the sweet and frothy sap is gathered by a mangangarit in a morning ritual that involves climbing tall coconut trees and crossing slim bamboo poles between the trees to collect the fresh raw material that is a rejuvenating drink by itself.

With natural fermentation and distillation, tuba becomes the more potent lambanog that is being exported to the United States as “distilled coconut spirit.”

Once popular homebrew, the lambanog has seen better days, what with affordable local and imported wines now flooding the market and occasional reports of fake gin discouraging drinkers.

Just last month, the Food and Drug Administration (FDA) ordered an investigation of a local gin brand that it ordered seized from the market after reports that one woman had died, while another showed signs of possible methanol poisoning after consuming the product.

The product, which is not registered with the FDA, was found to contain a high level of methanol, a product of natural fermentation that brewers add to their product to enhance the aroma. In high concentration, however, it can be toxic.

But according to Mario Abas, 76, a retired public school teacher, those who have given up lambanog in favor of other drinks “are missing something.”

“A gallon of lambanog with bits of prunes or ripe jackfruit that has been aged for months or years is comparable in taste to that of imported wine,” Abas said. “The kick is more rejuvenating and refreshing.”