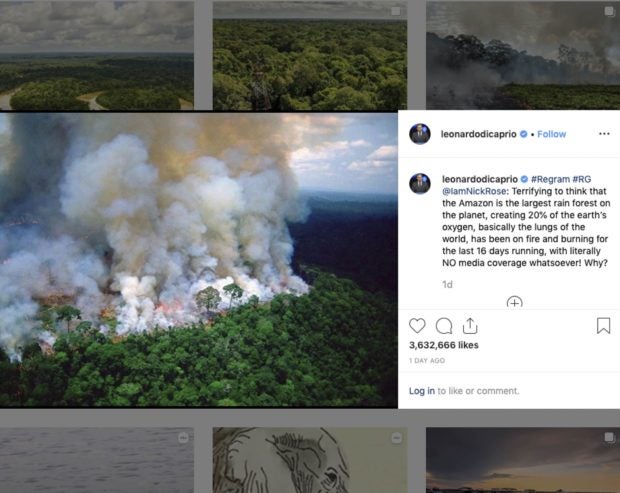 REALITY CHECK In their rush to denounce the huge fires eating up the Amazon, several celebrities quickly posted photographs on social media, some of which turned out to be old pictures of Amazon fires. —LEONARDO DICAPRIO’S INSTAGRAM

RIO DE JANEIRO—Many high-profile figures seeking to denounce the fires in the Amazon—from Madonna and Cristiano Ronaldo to Leonardo DiCaprio and Emmanuel Macron—have unwittingly ended up misleading millions on social media, either sharing photographs of the region that are years old or images taken in other parts of the world.

Official figures show nearly 73,000 forest fires were recorded in Brazil in the first eight months of the year, the highest number for any year since 2013. Most were in the Amazon.

“Our house is on fire. Literally. The Amazon, the lung of our planet which produces 20 percent of our oxygen is burning,” France’s President Macron said on Twitter, posting a photograph of a burning forest accompanied by the hashtag #ActForTheAmazon.

“It is an international crisis. Members of the G7, let’s talk in two days about this emergency,” Macron said ahead of a planned summit this weekend in Biarritz.

But the photograph used by the French leader does not show this year’s fires. A reverse image search showed that it was taken by the American photojournalist Loren McIntyre, known for his work for National Geographic.

Although the image search tool does not reveal when exactly the photograph was taken, McIntyre died in 2003, meaning the image is at least 16 years old.

Chile’s president, Sebastian Piñera, also ended up tweeting a misleading image to issue a warning about the fires, using a photograph by Reuters journalist Nacho Doce from 2013.

DiCaprio shared two pictures that proved to be inaccurate—the first was the same one shared by Macron, while the second was shot in the Peruvian city of Puerto Maldonado in 2016.

Peru is not currently affected by the fires, though authorities are “on alert.”

Actor and rapper Jaden Smith, son of superstar Will Smith, posted a dramatic image on Instagram that shows a vast forest on fire as huge columns of smoke rise from it. But the photo, which has garnered more than 1.5 million likes, dates back to 1989.

Argentine actress and singer Martina Stoessel also shared an old photo with a Twitter post saying, “How sad to see this…” That picture was shot by Getty Images photographer Mario Toma in 2014.

Portuguese soccer superstar Ronaldo sounded the alarm on Instagram, alerting his 180 million followers that “the Amazon rain forest produces more than 20 percent of the world’s oxygen and it’s been burning for the past three weeks.” But the photo accompanying his message was taken on March 29, 2013 by Lauro Alves, from the Brazilian agency RBS, in the non-Amazonian state of Rio Grande do Sul.

American superstar Madonna posted the same 1989 image shared by Smith and Djokovic, writing on Instagram: “President Bolsonaro please change your policies and help not only your country but the entire planet. No economic development is more important than protecting this land … We need to WAKE -UP!!” she wrote.

Even as Brazil struggles to contain the dozens of fires that have scorched large swaths of the Amazon, its government has been trying to cope with the growing global outrage over its environmental policies that many blame for the runaway deforestation of the world’s largest rain forest.

The fires that Brazilian President Jair Bolsonaro has claimed—without presenting proof—may have been intentionally set by nongovernmental organizations (NGOs) to undermine him, continue to spread as Germany and Norway appear to be on the brink of shutting down a $1.2-billion conservation initiative for the Amazon.

“The ongoing forest fires in Brazil are deeply worrying,” the European Commission said in a statement on Thursday. “Forests are our lungs and life support systems.”

Such concern over Bolsonaro’s environmental policies—which have prioritized the interests of industries that want greater access to protected lands—has put at risk a trade agreement that the European Union and some South American nations struck in June, following decades of negotiations.

The backlash hardly moved Bolsonaro’s officials. In a series of tweets, Filipe Martins, foreign policy adviser to Bolsonaro, wrote: “We know how to protect and take care of what is ours.”

He added: “If you are wondering who is going to save the Amazon, here’s a very straightforward answer for you: It’s not the empty, hysterical and misleading rhetoric of the mainstream media, transnational bureaucrats and NGOs.”

Brazil has strict environmental laws and regulations, but they are often violated with impunity. The vast majority of fines for breaking environmental laws go unpaid with little or no consequences. —AFP AND NEW YORK TIMES NEWS SERVICE