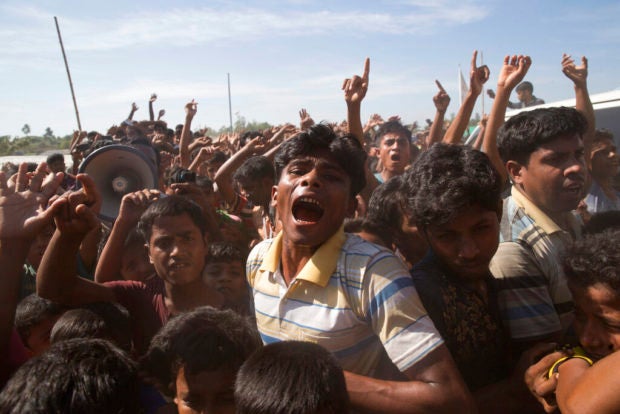 In this file photo dated Nov. 15, 2018, Rohingya refugees shout slogans during a protest against the repatriation process at Unchiprang refugee camp near Cox’s Bazar, in Bangladesh. Sexual violence carried out by Myanmar’s security forces against the country’s Muslim Rohingya minority was so widespread and severe that it demonstrates intent to commit genocide as well as warrants prosecution for war crimes and crimes against humanity, according to a U.N. report released Thursday Aug. 22, 2019. The Rohingya refugees still live in squalid camps in Bangladesh, and a planned effort Thursday to repatriate an initial large group to Myanmar collapsed when none showed up to be taken back. (AP Photo/Dar Yasin, FILE)

BANGKOK — Sexual violence carried out by Myanmar’s security forces against the country’s Muslim Rohingya minority was so widespread and severe that it demonstrates intent to commit genocide as well as warrants prosecution for war crimes and crimes against humanity, a U.N. report charged Thursday.

Its report on sexual and gender-based violence in Myanmar covers the Kachin and Shan ethnic minorities in northern Myanmar as well as the Rohingya in the western state of Rakhine.

Myanmar’s government and military have consistently denied carrying out human rights violations, and said its military operations in Rakhine were justified in response to attacks by Rohingya insurgents.

Many human rights groups have accused Myanmar of carrying out genocide or ethnic cleansing against the Rohingya. In an earlier report, the U.N. mission documented other major abuses in Rakhine since 2016, including widespread killings and torching of villages, and found that similar abuses were carried out in Kachin and Shan states.

While describing sexual violence as a “hallmark” of the military’s operations, the new report notes that it is also perpetrated by armed guerrilla groups of the ethnic minorities in northern Myanmar, “although to a significantly lesser extent.”

“Sexual violence is an outcome of a larger problem of gender inequality and the lack of rule of law,” the report asserts, noting that the U.N.’s ranking of Myanmar’s gender inequality at 148 of 189 countries indicates it is especially prone to sexual and gender-based violence.

Looking at the root causes of the problem in Myanmar society, the fact-finding mission concluded that “the discriminatory framework of laws and practices even in peacetime contribute and aggravate violence against women in wartime,” said Radhika Coomaraswamy, a Sri Lankan lawyer who is one of the mission’s three international experts, speaking at a news conference at U.N. headquarters in New York.

Coomaraswamy said researchers had found a link between militarization across Myanmar in every facet of life and higher levels of sexual violence.

She told reporters that the mission’s overarching recommendation is the need for security sector reform under civilian oversight of the military.

The fact-finding mission, led by Indonesian human rights lawyer Marzuki Darusman, was established by the U.N.’s Human Rights Council in 2017 in reaction to increasing repression of the Rohingya, an ostracized minority in Buddhist-dominated Myanmar.

Violence against the Rohingya increased markedly in August that year, when security forces launched a brutal counterinsurgency campaign that drove more than 700,000 Rohingya villagers into neighboring Bangladesh.

The Rohingya refugees still live in squalid camps in Bangladesh, and a planned effort Thursday to repatriate an initial large group to Myanmar collapsed when none showed up to be taken back.

The new report condemns Myanmar’s failure to hold accountable the perpetrators of the abuses, noting that “such violence was only possible in a climate of long-standing tolerance and impunity, where military personnel had no reasonable fear of punishment or disciplinary action.”

Coomaraswamy said the commission believes an “international mechanism” is needed, either a hybrid court or an international court. She said the Human Rights Council has set up “a prosecutorial agency” to receive the commission’s information and prepare files for eventual prosecutions.

The report says its finding of genocidal intent toward the Rohingya was supported by “the widespread and systematic killing of women and girls, the systematic selection of women and girls of reproductive ages for rape, attacks on pregnant women and on babies, the physical branding of their bodies by bite marks on their cheeks, neck, breast and thigh, and so severely injuring victims that they may be unable to have sexual intercourse with their husbands or to conceive and leaving them concerned that they would no longer be able to have children.”

A less detailed 2018 report by the fact-finding mission also tied sexual and gender-based violence to genocidal intent, citing the statements of Myanmar officials and what was described as an “organized plan of destruction that included the targeting of women and girls of reproductive age for rape, gang rape and other forms of sexual violence” and the military’s “extreme brutality, including attacks on pregnant mothers and on babies.”

Coomaraswamy said cases of sexual violence in Shan and Kachin and in the current fighting in Rakhine state between the military and the Arakan Army are not on the scale of what took place against the Rohingyas.

“So we feel in the case of the Rohingyas it was really a kind of intent to destroy the population, to send them out, to make them flee,” Coomaraswamy said.

She said the report was sent to the Myanmar government a week ago. “We have not heard anything from them.”

In reaction to another report by the mission earlier this month about the alleged corporate enablers of the military, Myanmar’s foreign ministry said that in establishing the fact-finding mission, the U.N. Human Rights Council “exceeded its mandate and contravened the terms and practices of International Law. We do not recognize either the Fact-Finding Mission or the report that it produced. The Government of Myanmar categorically rejects the latest report and its conclusions.” /jpv

Read Next
FBI takes down Nigerian fraudsters in $46-M case
EDITORS' PICK
Cebu City closes its borders
BREAKING: 1,075 people in PH has coronavirus disease – DOH
Style and music journeys with Claudia Barretto
DILG to stranded workers: ‘Stay where you are’ until Luzon-wide quarantine is over
UP-PGH wards for COVID-19 patients finished in 5 days
IATF: Food firms to operate with 50% of workforce during Luzon quarantine
MOST READ
Pacquiao to seek probe on leaked private letter from Barangay Dasmariñas
Tootsy Angara bares neighbor wanted them out of village
McCoy bares devastating effect of failed romance with Elisse
What awaits medical volunteers in DOH drive vs coronavirus
Don't miss out on the latest news and information.