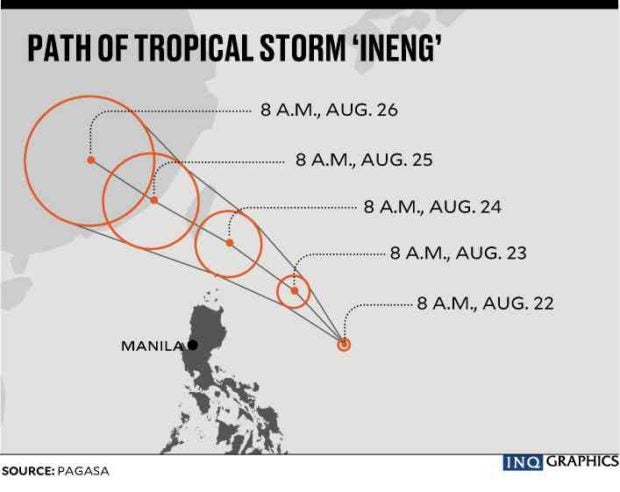 It will be a rainy weekend as Tropical Storm “Ineng,” along with the southwest monsoon, brings rainfall across Luzon and the Visayas, the government weather bureau said on Thursday.

Ineng’s center was spotted 680 kilometers east of Casiguran, Aurora, at 3 p.m. on Thursday. It packed peak winds of 75 km per hour near the center and gustiness of up to 90 kph, according to the Philippine Atmospheric, Geophysical and Astronomical Services Administration (Pagasa).

The storm was moving west-northwest at 10 kph, it said.

Rains with gusty winds will prevail over the provinces of Batanes, Cagayan, including Babuyan Group of Islands, Isabela, Apayao, Kalinga, Abra and Ilocos Norte. Storm Signal No. 1 had been raised in these areas.

Pagasa warned of possible flash floods and landslides due to scattered light to moderate and, at times, heavy rains in these areas.

In Batanes, villagers in earthquake-hit Itbayat town were advised to take precautionary measures amid the storm warning.

Itbayat Mayor Raul de Sagon ordered the suspension of classes in the town on Friday as Ineng and the southwest monsoon were expected to spawn heavy rains in northern Luzon.

Pagasa advised operators of fishing boats and other small vessels against sailing due to rough seas.

In southern Luzon, classes in all levels in Albay province were suspended on Thursday while sea travel from Batangas province to ports in Oriental Mindoro province using small boats and fastcraft were halted due to moderate and occasionally heavy rains.

Chris Perez, Pagasa senior weather specialist, said Ineng was less likely to make landfall but could intensify into a severe tropical storm in the next 24 hours.

It was expected to exit the Philippine area of responsibility between late Saturday and early Sunday. —REPORTS FROM JHESSET ENANO, NATHAN ALCANTARA, VILLAMOR VISAYA JR., MAR ARGUELLES AND MADONNA VIROLA