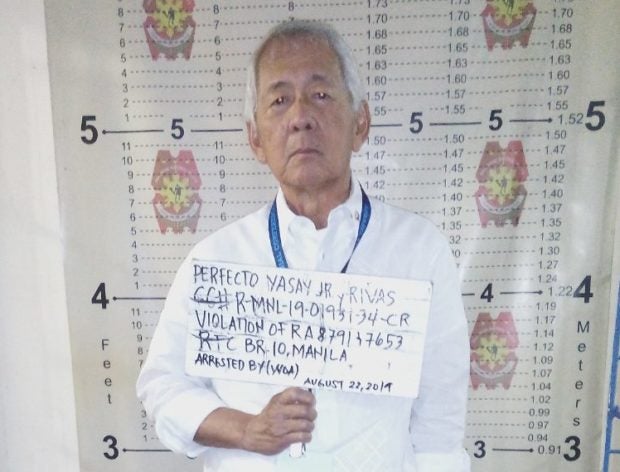 Reports from the Manila Police District (MPD) said that Yasay’s arrest was ordered by Judge Danilo Leyva, Presiding Judge of Regional Trial Court Branch 10 in the City of Manila.

The arrest order was served by personnel from MPD’s Criminal Investigation and Detection Unit (CIDU) at Yasay’s residence in Makati City.

According to CIDU, a lawyer from Bangko Sentral ng Pilipinas asked them to provide police assistance in the implementation of a warrant of arrest against the former secretary.

Yasay is accused of violating Republic Acts 8791 and 7653 or the General Banking Law and the New Central Bank Act, for his involvement in an anomalous loan from Banco Filipino Savings and Mortgages Bank.

Information from the Warrant and Subpoena Section (WSS) said that Yasay, who was then working for Banco Filipino, allegedly conspired with five other bank officials sometime between 2001 and 2009 in securing a P350 million loan for Tierrasud Incorporated, which operates under Tierrasud Land Corporation.

Yasay and the other accused supposedly did not report the loan accommodations to BSP, even with subsequent reminders to present reports.

In a Facebook post, the former secretary confirmed that he was arrested.  However, he insisted that he was not yet part of Banco Filipino when the crime happened: Yasay said that it occurred in 2003 to 2006, while he claims to have joined the bank only in 2009.

“To all my friends, allow me to inform you that I am now being arrested from my house by police officers of Manila on the basis of […] criminal charges that were allegedly committed by officials of Banco Filipino from 2003 to 2006, when in truth and in fact I joined the Bank only in 2009,” Yasay said in his post.

He also said that he will likely spend the night in MPD’s detention facility, as he would not post bail until he is brought before the said judge.

“I am not posting bail until i am brought before the judge where I will question this abuse of process and travesty of justice.  Please include me in your prayers for my deliverance,” Yasay added.

Yasay was brought to CIDU for his documentation while awaiting commitment orders from the court.

He was President Rodrigo Duterte’s first Department of Foreign Affairs (DFA) chief, until the Commission on Appointments denied his ad interim appointment because of questions about his citizenship.

Yasay was previously a United States citizen, although he claims that it was voided after he abandoned his residency.