Sotto: Got penis? Then go to men's restroom | Inquirer News

Sotto: Got penis? Then go to men’s restroom 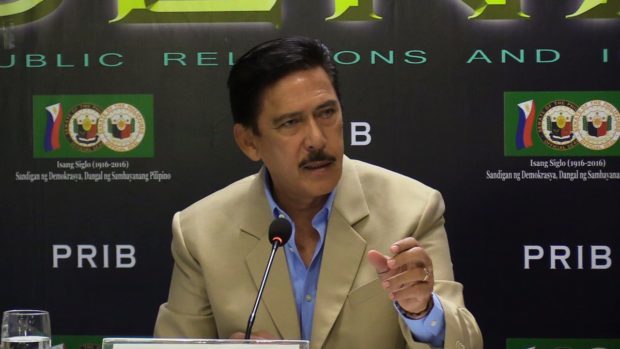 MANILA, Philippines — Senate President Vicente “Tito” Sotto III has a simple solution to the debate of whether or not transgender people should be allowed inside the ladies’ restroom.

You have a penis, then go to the men’s restroom.

And Sotto used this as an argument against the Sexual Orientation and Gender Identity and Expression (SOGIE) Equality bill, which he said would be subject to abuse.

“Kitang-kita ngayon pa lang eh,” Sotto said in an interview at the Senate on Thursday, pointing out that women are already complaining against transgender people using the ladies’ room.

Inside the ladies’ restroom, he said, transgender people reportedly talk about their genitals and even show each other how they cover it.

But when straight people call them out, transgender people would threaten to take a video to make it appear that they are being discriminated, he claimed.

The recent arrest of transgender woman Gretchen Diez for unjust vexation when she took a video after she was barred from entering a women’s restroom at a mall in Quezon City started the debate whether or not they should be allowed inside the ladies’ room.

The Senate leader said he feels strongly about the issue because from a transgender rights issue, it has now turned into a women’s rights issue.

“This is now an issue on women’s rights because I feel that a woman’s body is a temple and to her, the toilet is sacred. It’s where she has a weakest point,” he said.

Sotto then mentioned about a transgender loitering at a women’s restroom at the Senate as if just waiting to get attention.

He said he then asked the Senate’s Sergeant at Arms to “get rid” of the transgender and led her instead to a “genderlesss” toilet.

“Aba eh ano ginagawa mo dun? Di ba naghahanap ka lang ng gulo. But I already told the Sergeant-at-Arms to get rid of him,” he added.

Sotto earlier said the Sogie bill has no chance of passing in the Senate “IF it transgresses on academic freedom, religious freedom and women’s rights.” /je

READ: Sotto: ‘No chance’ of passing SOGIE bill in Senate