MANILA, Philippines — Convicted rapist-murderer and former Calauan Mayor Antonio Sanchez is not qualified for early release based on good conduct.

This was what lawmakers pointed out Thursday amid reports that Sanchez may be set free soon under Republic Act No. 10592, which increased the good conduct time allowance (GCTA) for inmates.

Ako Bicol Rep. Alfredo Garbin Jr., vice chairman of the House committee on justice, said he would file a resolution to probe the implementation of Republic Act No. 10592.

Garbin, a lawyer, stressed that established facts and records would reveal that Sanchez violated prison rules thus, unqualified for the law that favors inmates who show exemplary behavior.

“How in the world is smuggling illegal drugs and contraband in his jail cell would constitute Good Behavior?” he asked.

“He is absolutely unqualified for the law. To do otherwise is to cause ignominy and more suffering to the victims’ family,” he added.

“Sanchez, who was caught with marijuana, shabu, tested positive on drug use, and enjoyed an air conditioner and flat-screen tv in his cell, makes him INELIGIBLE for GCTA,” Nograles said in a statement.

“Not a single day credit should be given to him,” he also said, adding that Sanchez must serve his sentence in full.

The ACT-CIS party-list, meanwhile, sent Thursday a letter to Justice Secretary Menardo Guevarra appealing to reevaluate their move, following his statement that Sanchez, as well as thousands of other convicts, might soon be released under a 2013 law that credited good conduct during imprisonment.

“There is a need for a strict review and careful recompilation of the law to ensure that those who will be released went through proper rehabilitation and are ready to be reintegrated in the society,” ACT-CIS Rep. Eric Yap wrote. 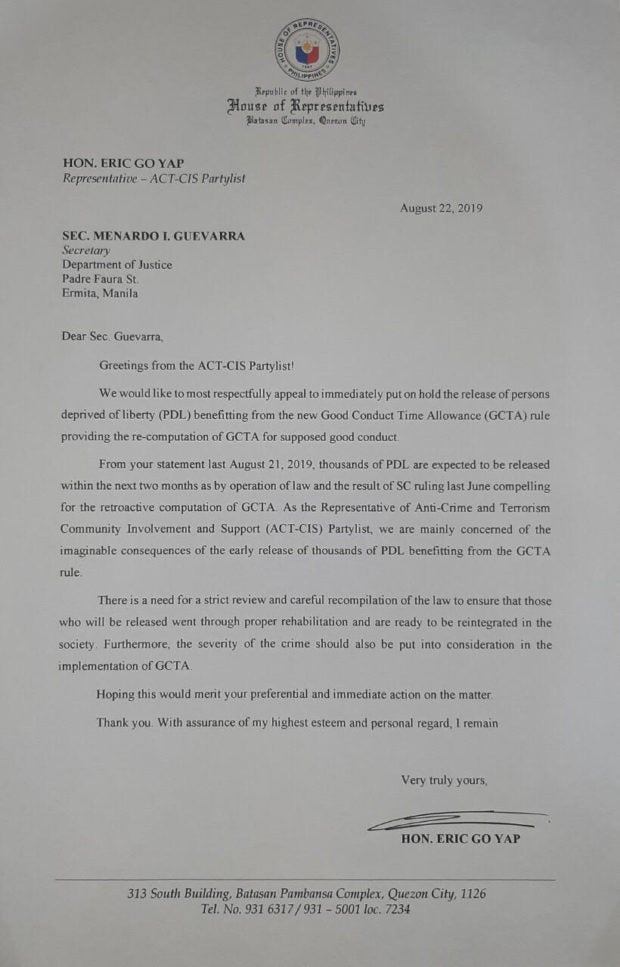 Sanchez was convicted for the 1993 rape-slay of University of the Philippines Los Baños student Eileen Sarmenta, and murder of her companion, Allan Gomez, in Laguna.

Sanchez is said to be facing a 360-year prison sentence for the Sarmenta-Gomez case and two other murder cases.

In a unanimous decision penned by Associate Justice Diosdado Peralta on June 25, the Supreme Court allowed the retroactive application of the grant of GCTA, meaning the law could apply even to those who were convicted before it was passed in 2013.

Following this, Guevarra said the Bureau of Corrections recomputed all the prisoners’ GCTA beginning with those who were sentenced in 1993.

However, he said he had ordered a strict review and careful recompilation of the GCTAs of all persons deprived of liberty involved in high-profile and heinous crimes.

BuCor director-general Nicanor Faeldon had also clarified that Sanchez may not be qualified for release pending review of his GCTA. /kga