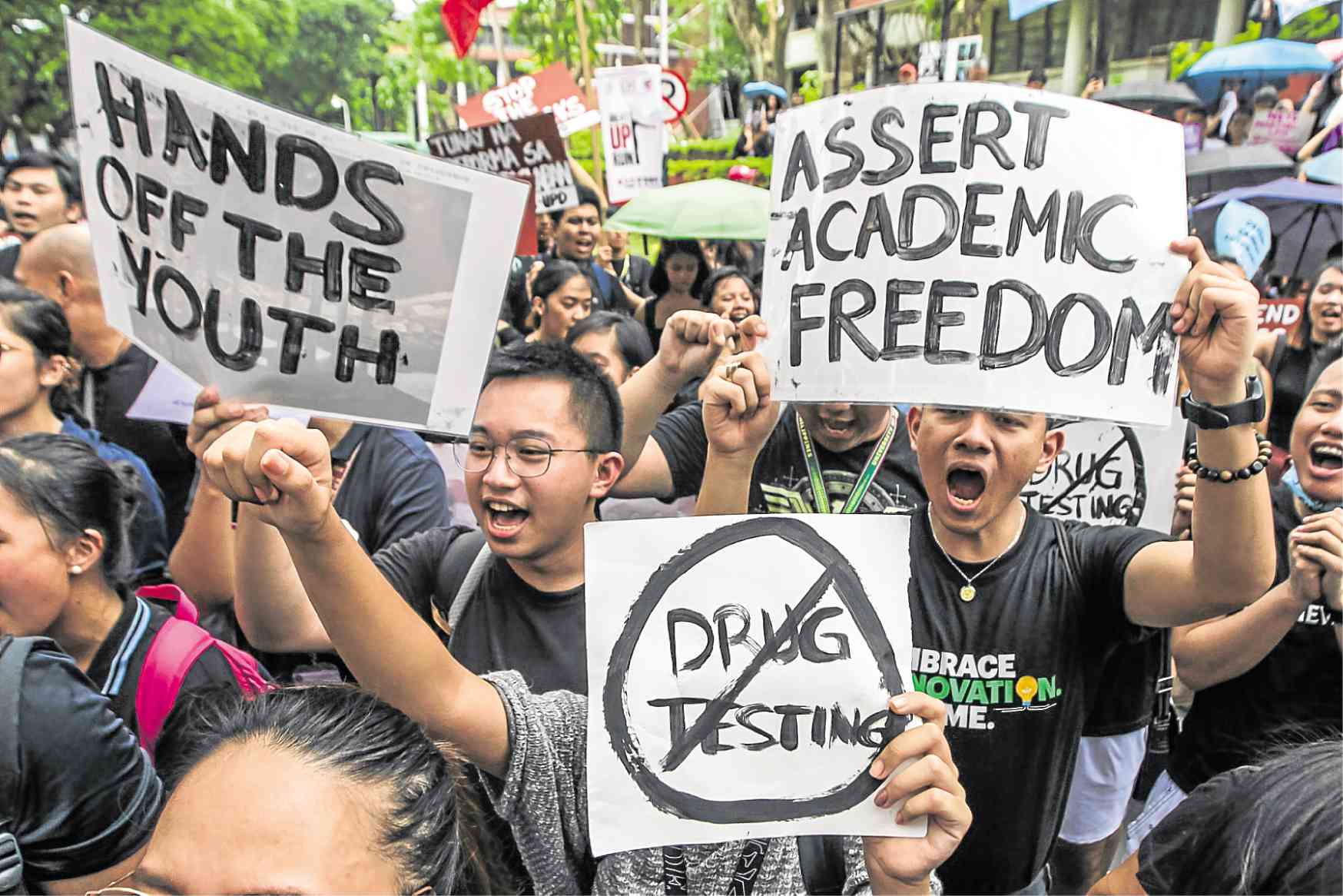 RECRUITMENT GROUNDS? The AFP and PNP should be given access to schools to protect students from being brainwashed, according to Sen. Ronald dela Rosa. —Leo Sabangan

MANILA, Philippines — Policemen and soldiers should run after criminals and protect the country’s territory, not  “guard” academic institutions, two administration senators reminded the government on Wednesday.

In separate statements, Senators Joel Villanueva and Imee Marcos opposed proposals for the Philippine National Police and Armed Forces of the Philippines to deploy their troops to schools and universities to prevent left-leaning organizations from recruiting students.

“We have illegal occupants on our islands, illegal ships passing through our seas, illegal workers coming in, and we will target students in universities?” Villanueva asked.

“In addition, why prioritize and put [the] military and police in universities when we need them to solve crimes in other areas?” he stressed.

Marcos, on the other hand, said that state forces should “not invade the schools and prove those NPA recruiters right,” referring to the New People’s Army (NPA), the armed component of the Communist Party of the Philippines (CPP).

“The presence of military and police in schools is wrong. It will only radicalize the students,” she warned.

“The organizers will claim that there’s state fascism. The students would only fall for the communists if the schools will become garrisons,” Marcos added.

“Military presence might constrict what we want universities to accomplish,” he said.

If authorities have concerns regarding peace and order in schools, it would be better to have “special police” units, like the UP Police Force, deployed to safeguard students instead of regular police and military personnel, Villanueva pointed out.

Sen. Ronald dela Rosa, a former PNP chief, and other senior security officials had suggested sending soldiers and policemen to schools and universities after parents of several student-activists sought their assistance in locating their “missing” children.

Hundreds of UP students nationwide staged a walkout on Tuesday to protest against the “prevailing and looming attacks” on their campuses.

An official of the Department of the Interior and Local Government (DILG), however, accused the students opposing the proposal of having an overactive imagination.

In a statement on Wednesday, DILG spokesperson Jonathan Malaya claimed that militant student groups in UP missed the point of giving police and military access to their campuses to counter communist recruitment.

“We have no problem with student activism. There are many in government today who are former student activists and therefore understand the need to have youth who are critical thinkers,” he said.

But he pointed out that it was unacceptable to exploit youth idealism and dynamism to encourage armed rebellion against the state.

“When you use the democratic space provided by the Constitution as a front or excuse to recruit, train and wage armed struggle against duly constituted authority, then that becomes a criminal act and must be prevented by the state,” Malaya explained.

He said equating granting police and military access to schools with militarization and martial law was a “figment of the imagination gone [into] overdrive.”

“This is again classic communist propaganda: Using the politics of fear to portray the government as a repressive monster to earn political ‘pogi’ (plus) points from students,” Malaya said. —With a report from Jeannette I. Andrade