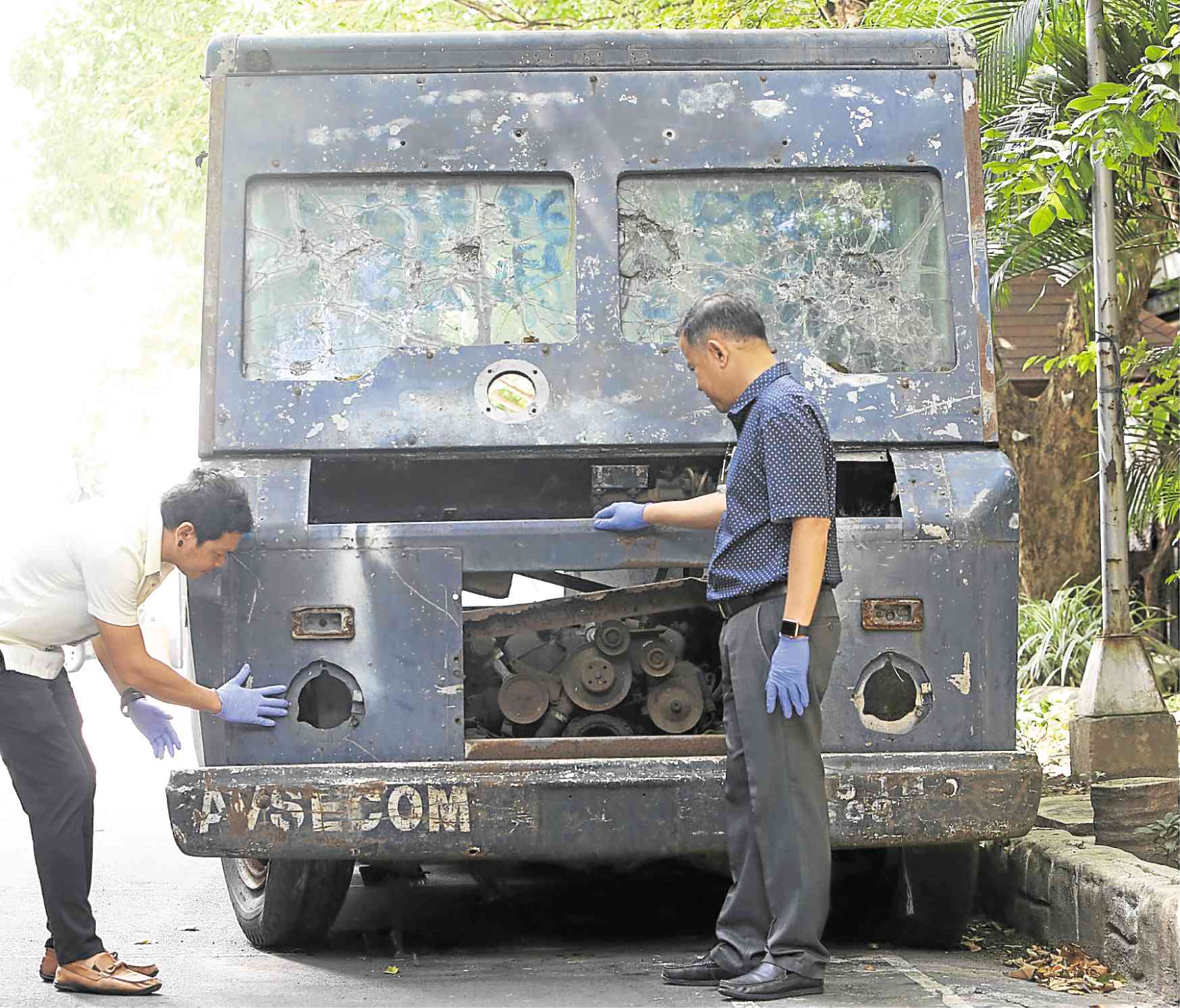 A PIECE OF HISTORY National Historical Commission of the Philippines officials inspect the Aviation Security Command van which is set to undergo renovation before it goes to a museum to be built in Quezon City. —MARIANNE BERMUDEZ

MANILA, Philippines — The Aviation Security Command (Avsecom) van that brought former Sen. Benigno “Ninoy” Aquino Jr. to an Army hospital in Fort Bonifacio shortly after he was shot at the international airport 36 years ago will be put on display at a museum.

But first, it will undergo restoration following its turnover to the National Historical Commission of the Philippines (NHCP).

The dilapidated blue armored van has been defaced by graffiti although the Avsecom logo is still visible. The rear bumper and wheel interior have started to rust.

Along with a replica of the China Airlines plane that brought Aquino to Manila on Aug. 21, 1983, the van will be on permanent display at the Freedom Memorial Museum.

The 1.4-hectare museum to be built on the University of the Philippines campus in Diliman, Quezon City, is expected to be completed by 2022.

NHCP chair Rene Escalante told the Inquirer that the van was bought by former Air Force Col. Marlon Marasigan. After her husband’s death, Marasigan’s wife donated the vehicle in 2017 to the NHCP.

Escalante said that the restoration of the vehicle—which would cost around P2 million—should be completed before Aquino’s death anniversary next year.

“The original intention was to display [it] at the Presidential Car Museum in Quezon City but it did not seem appropriate,” he said.

According to him, it seemed fitting to put it instead in a facility honoring human rights victims under martial law.

Aquino, who was the first opposition leader to be jailed when President Ferdinand Marcos declared martial law in 1972, returned to the country after three years of self-exile in the United States.

Upon his arrival, he was met by men in soldiers’ uniforms who escorted him off the plane. Other passengers would later hear a gunshot, followed by five other shots.

The government claimed that he was killed by Rolando Galman.