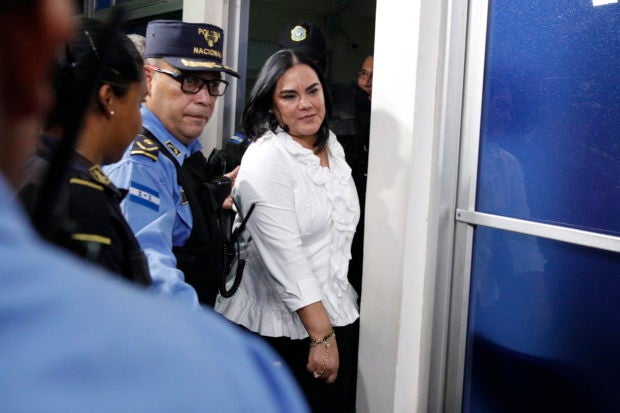 Former Honduran first lady Rosa Elena Bonilla de Lobo leaves court after her conviction on corruption charges in Tegucigalpa, Honduras, Tuesday, Aug. 20, 2019. The court convicted the former first lady on Tuesday of embezzling about $600,000 in government money between 2010 and 2014, when her husband Porfirio Lobo was president. Bonilla’s sentence will be announced Aug. 28 and could run between 58 and 87 years in prison. (AP Photo/Elmer Martinez)

TEGUCIGALPA, Honduras — A Honduran court convicted former first lady Rosa Elena Bonilla on Tuesday of embezzling about $600,000 in government money between 2010 and 2014 when her husband Porfirio Lobo was president.

Bonilla’s sentence will be announced on August 28 and could run between 58 and 87 years in prison. Bonilla’s brother-in-law Mauricio Mora was acquitted.

The case was originally brought forward by the Organization of American States’ anti-corruption mission, which began its mandate in the country in 2016 after large street protests against graft.

Investigators for the nongovernmental National Anticorruption Council have told prosecutors that Bonilla deposited $600,000 in government funds into her personal bank account five days before Lobo ended his four-year term in January 2014.

Prosecutors said she used the money to buy jewelry and pay credit cards.

Lobo, who is also facing a corruption probe, said, “We do not agree with the verdict, and we will appeal.”

He vowed to take the case to the Inter-American Court of Human Rights if necessary.

Lobo has denied the accusation. /kga