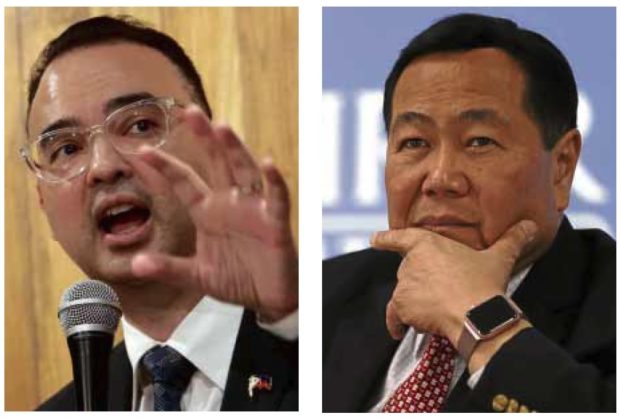 Saying he was “fact-checking” Cayetano, Carpio pointed out that China claims nearly the entire West Philippine Sea, waters within the country’s 370-kilometer exclusive economic zone (EEZ) in the strategic waterway.

Among the Philippines’ neighbors, only China is claiming the waters that are for the exclusive use of Filipinos, Carpio said.

In a radio interview on Monday, Cayetano belittled the calls of Carpio and former Foreign Secretary Albert del Rosario for the Philippines to stand up to China by saying Malaysia and Vietnam occupy more geologic features than China in the South China Sea.

“I respectfully disagree with Justice Carpio and Secretary Del Rosario. They say that if we do not publicly object, those are gone. If that is true, then Malaysia and Vietnam have all of those and we have none. But we’re still claiming that, that’s inside our EEZ,” Cayetano said.

He, however, acknowledged that China was occupying bigger features in the South China Sea and had transformed these into “military installations.”

“Fact-checking Speaker Cayetano,” Carpio said in a statement sent to reporters on Tuesday.

“Fact: Malaysia occupies five features in the West Philippine Sea; Vietnam 21; China eight including Scarborough Shoal (nine if we include Sandy Cay), and the Philippines nine,” he said.