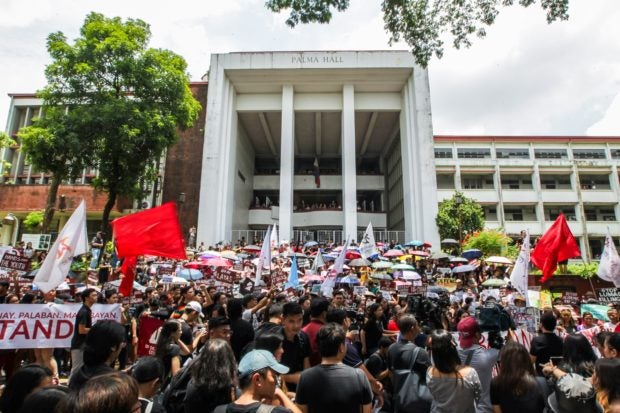 WALKOUT AT TWO STATE UNIVERSITIES Students and teachers stage rallies on the campuses of the University of the Philippines and Polytechnic University of the Philippines—(clockwise, from left) UP Diliman in Quezon City, UP Baguio, UP Miag-ao in Iloilo province, and PUP in Santa Mesa, Manila—to protest proposals to deploy soldiers and policemen to state universities. LEO M. SABANGANII

MANILA, Philippines — “Accusations that they are students by day and rebels by night are not only laughable [but] also ridiculous displays of Red-tagging,” a University of the Philippines (UP) student leader said as protests shook UP campuses nationwide on Tuesday.

With placards, banners and chants, thousands of students and teachers staged a UP system-wide “Day of Walkout and Action” to defend the university from militarization and threats to academic freedom.

In solidarity, students of Polytechnic University of the Philippines, another state-run academic institution, also staged a walkout on their main campus in Santa Mesa, Manila.

“Martial law sa pamantasan, tutulan, labanan (Resist and fight martial law in the university)” was one of the loudest chants, as UP collectively responded to the proposed deployment of policemen and soldiers to state universities.

Sen. Ronald dela Rosa, a former Philippine National Police chief, has asked the PNP to review its memorandum of agreement with some universities that prohibits the presence of uniformed personnel on campuses.

Dela Rosa said universities should also “police their ranks” against professors who could be “radicalizing” their students.

His proposal dovetails with the call of Interior Secretary Eduardo Año to restore the antisubversion law that declared the Communist Party of the Philippines and membership in it illegal.

Año has claimed that every year, 500 to 1,000 youths are indoctrinated by the communist movement into either joining its armed wing or serving as leaders of militant groups in schools.

Nico Ponce, chair of the UP Baguio student council, denounced the Duterte administration’s attempts to link nongovernmental organizations and militant groups to the communists.

“We are activists, not terrorists,” the students chanted as they linked arms outside the campus gates at a noontime rally in Baguio City. 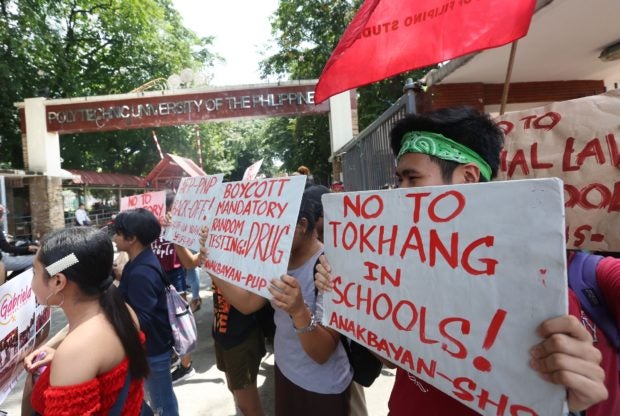 “We cannot allow this government to accuse us of being rebels when our struggles are no different from what our parents endure, what our farmers and workers suffer,” said Eman Gananciasa, an economics student.

In UP Diliman, Gerry Lanuza, a sociology professor, said the students and teachers were fighting for academic freedom.

“Academic freedom is not owned by teachers or students. It is freedom granted by the university so we can study without barriers or limitations to our capacity to find the truth, such as fascism,” Lanuza said.

The UP teachers hit back at Dela Rosa for accusing them of “brainwashing” students and “recruiting” them to the communist movement.

The “UP Day of Walkout and Action” was declared through a memorandum released on Aug. 14 by Isaac Punzalan, UP student regent, who likened campus militarization to “martial law in universities.”

“Our academic freedom is at high risk of being taken away from us,” Punzalan said.

Hundreds of UP Los Baños (UPLB) students started the walkout around 4 p.m. in front of the Humanities building and proceeded to several other buildings to encourage other students to join them. They proceeded to Carabao Park near the UPLB gate and held a short program.

Some of their placards read “No to martial law in schools” and “Defend academic freedom.”

On Aug. 8, policemen who introduced themselves as members of the Bay municipal police tried to enter UP Rural High School in the adjacent town of Bay “without any clear objective,” according to a statement from All UP Academic Employees Union-UPLB.

Hundreds of UP students also walked out of their classrooms in Cebu City, Tacloban City, Iloilo City, Miag-ao town in Iloilo province, and in Davao City.

“Activists are not terrorists,” read several placards raised by students who marched to the Oblation statue, UP’s iconic symbol, where a program was held.

On the Miag-ao campus, the students held a protest in front of the College of Arts and Sciences building.

The protests were supported by UP Visayas officials.

In Cebu, at least 300 UP students staged the walkout, including Grades 11 and 12 students who were in uniform.

University officials and employees joined the rally later on Fuente Osmeña, about 3 kilometers from the UP campus on Gorordo Avenue.

“The University of the Philippines as an academic institution … continues to be a bastion of free, independent, critical thinking and open analysis of domestic and global sociopolitical issues,” said UP Cebu Vice Chancellor Weena Gera.

In Tacloban, at least 100 UP students joined the walkout at 2:30 p.m. that was followed by a rally downtown.

Several faculty members of UP Mindanao joined students bearing placards urging the police and military to keep off campuses.

In a message sent from the PNP Custodial Center at Camp Crame, Sen. Leila de Lima urged UP students to go out of their space of comfort as the “space for dissent has been narrowed by antipeople policies of the Duterte administration.”