newsinfo / Headlines
Headlines
‘NO SUCH THING AS CAMPUS MILITARIZATION’ 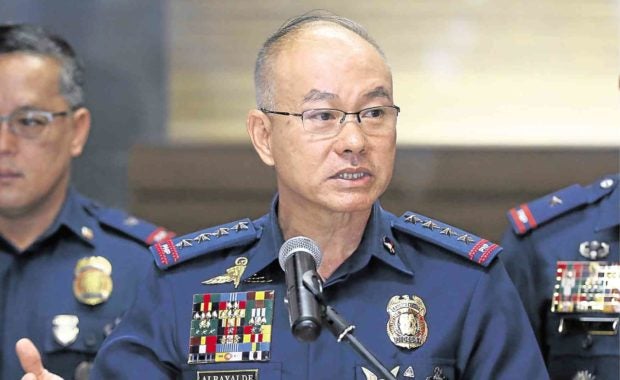 MANILA, Philippines —Philippine National Police chief Oscar Albayalde on Tuesday assured students of state universities that there would be no militarization of campuses should security forces be allowed access to them.

His statement came despite an Armed Forces of the Philippines bent on deploying soldiers to schools purportedly to counter communist recruitment.

“There is no such thing as militarization of a campus. Until now, we (PNP) cannot just enter campuses or universities if we do not have prior coordination or business there,” Albayalde said at a press briefing on Tuesday at Camp Crame in Quezon City.

He pointed out that police visibility outside schools, particularly in the University Belt area in Manila and the University of the Philippines campuses, was intended to protect students against crimes like robbery.

“We will engage not only the different campuses but also the CHEd (Commission on Higher Education) and the DepEd (Department of Education). We will engage them so we can enlighten these overreacting militant groups,” Albayalde said.

He said only militant groups, which he claimed comprised a minority, were reacting negatively to the proposal.

Albayalde said the PNP was trying to prevent massive recruitment and radicalization of innocent students by the communist movement.

“Our students, especially those coming from different far-flung areas and provinces, are very vulnerable. They are the target of militant groups,” he said.

For its part, the AFP said the deployment of soldiers and policemen to campuses was meant to stop the “very rampant” communist recruitment in schools.

“We are not deploying (soldiers) to act as guards like in a mall. We will just be there to assist school authorities to neutralize intrusions in the schools,” Col. Noel Detoyato, AFP public affairs office chief, said in a phone patch interview with defense reporters on Tuesday.

Read Next
4 vying for SC chief post after Bersamin retirement
EDITORS' PICK
Manila is 78th most expensive city in the world for foreign workers
TeaM Energy pushes development programs to help in pandemic rebound
Want to help local farmers? Shop small and eat Real Food
Piolo Pascual: The Ultimate Heartthrob continues to level up
ICC is everything but a court of ‘white people’
Garcia softens stance, meets IATF halfway on swab-upon-arrival policy
MOST READ
Sharon Cuneta on living in the US: ‘Nagagawa ko lahat ng normal na bagay’
Mike Nieto asks fans: ‘No below the belt remarks’ toward South Korea
ICC is everything but a court of ‘white people’
Duterte-Duterte tandem possible but ‘winnability is another question’ — Binay
Don't miss out on the latest news and information.