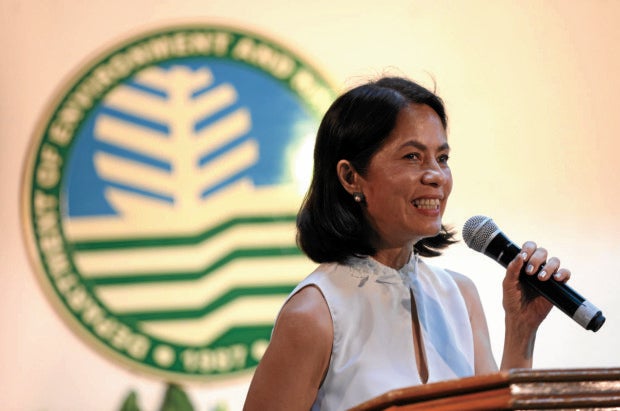 Gina Lopez, according to Sen. Sonny Angara, was the “confirmed environment secretary of the people, minister for sustainable development and ambassador for children’s rights.” INQUIRER PHOTO / LYN RILLON

MANILA, Philippines — Malacañang on Monday hailed Regina “Gina” Paz Lopez as a “warrior and advocate” for the environment, shortly after news broke that the former environment secretary had died.

Presidential spokesperson Salvador Panelo and other members of President Rodrigo Duterte’s Cabinet expressed their condolences to the family of Lopez, who died of brain cancer on Monday. She was 65.

“The Palace deeply grieves the demise of one of President Duterte’s most passionate Cabinet members whose environmental advocacy and legacy remains unparalleled to this day,” Panelo said in a statement.

“As we pay tribute and give honor to this warrior and advocate, we fervently pray for the Almighty to grant her eternal repose,” Panelo said.

In a text message to reporters, Executive Secretary Salvador Medialdea admitted that he had clashed with Lopez, but said he considered her a good friend.

“We had some slight differences on certain policies during our stint as members of the Cabinet, but remained as friends. We extend our condolences to the entire family and shall offer prayers for the eternal repose of her soul. Rest in peace, Gina,” Medialdea said.

“The world will not be the same without Gina Lopez,” Andanar said.

Panelo recalled Lopez’s clashes with the mining sector, which inevitably led to the rejection of her nomination by the Commission on Appointments.

“[She] took the bull by the horns when she fiercely fought powerful interests in the mining sector, as well as industries having negative effect on our ecology. She would be greatly missed,” he said.

Both the mining industry and its opponents issued statements expressing grief over Lopez’s death.

“Her strong advocacy for the protection of the environment and mining communities was in step with our organization’s commitment to responsible resource development,” said Rocky Dimaculangan, spokesperson for the Chamber of Mines of the Philippines.

“Our members will best remember her for keeping us active, alert and focused on ensuring that our operations will benefit present and future generations of Filipinos on a sustainable basis,” he said.

“I hope you have finally found peace. We had our differences, but at the end of the day, we both wanted the same thing: a better planet for our children. You kept the mining industry on its toes, urging us to do better, and for that, I am truly grateful,” said the chamber’s executive director, Ronnie Recidoro.

The mining industry opponent Alyansa Tigil Mina held Lopez as a “bastion of environmental activism, and a source of hope and inspiration for many communities and organizations that had the opportunity to work and be served by her.”

“Many of the young people in the antimining campaign were touched by Ma’am Gina, and we are sure that they wanted to tell her many things—that they started to find their place in serving the country through the eyes and experiences of a Gina Lopez,” the group said.

Lawmakers also paid tribute to Lopez, whose term abruptly ended when the Commission on Appointments rejected her nomination in May 2017 after she ordered an audit of the mining industry, canceled mining contracts, and suspended 26 projects that did not meet environmental standards.

Opposition Sen. Francis Pangilinan praised Lopez not only for her work as an environmentalist in her private capacity and as a member of the Cabinet, but also for defending children’s rights as head of the Bantay Bata Foundation.

“At the Senate, we stood by her appointment … because we believe that such an important position should be held by someone who understands how critical it is to prioritize the environment. Someone who is unafraid to butt heads with heavyweights who are harming our natural resources,” Pangilinan said.

“She was all that. In or out of [the] government, her life was about tireless creativity for all our collective future, through our children and our environment,” he added, describing Lopez as “a woman of courage” and “firebrand.”

Sen. Grace Poe thanked Lopez for “touching our lives in your impassioned ways.”

“[She] came in our midst and taught us love for mankind and the environment, our common home,” Poe said.

‘Secretary of the people’

Sen. Sonny Angara said that despite the appointments commission’s rejection of Lopez’s nomination, her “selfless works” showed that she was “the confirmed environment secretary of the people, the minister for sustainable development and the ambassador for children’s rights.”

Sen. Bong Go, who worked with Lopez when he was a special assistant to President Duterte, said his former Cabinet colleague was a “fearless advocate and a tireless philanthropist.”

“As a former colleague in the government, I know how passionate, dedicated and humble she was as a public servant and as an Earth warrior,” Go said. “Her exceptional dedication in protecting our environment has no equal today.”

In a handwritten dispatch from her detention cell in Camp Crame, Sen. Leila de Lima said Lopez’s dedication to her advocacies had inspired Filipinos to make a stand for the environment and children’s rights.

“This world will never forget the woman who, from a life of privilege, found her calling among those who have the least—in the slums, among the abused and with the indigenous communities devastated by the destruction of their ancestral domains,” De Lima said.

“The legacy she left will be a beacon in these dark times, guiding us through seemingly insurmountable odds, as we continue the struggle for truth, justice and peace,” she said.

Sen. Manny Pacquiao, who vigorously defended Lopez’s nomination as chair of the appointments commission’s committee on environment and natural resources, honored his “dear friend” for teaching Filipinos “to love our country by protecting our environment and caring for our people.”

“Her passion was undeniable. Her commitment was unquestionable. She lived her life to the fullest. Her legacy will inspire us to fulfill our mission with courage and conviction. Goodbye, my friend,” Pacquiao said.

Senate Majority Leader Juan Miguel Zubiri, said to be one of the 16 members of the appointments commission who voted against Lopez’s nomination, expressed admiration for the departed environmental advocate.

“She brought her environmental activism into every Filipino home in her travels around our beautiful archipelago,” Zubiri said.

“When disaster struck, she extended her able hands to help others. Even as a very young heiress of a media empire, she thought of their responsibility to the Filipino masses,” he said.

“We lost a strong defender of nature [with the death of] Gina. But we will continue her legacy and continue the struggle for the preservation of the environment,” Bayan Muna Rep. Carlos Zarate said.

“We grieve for Gina Lopez. But we, too, are grateful for the gift of life, spent for a worthy cause . . . a life of sincere commitment to what truly matters,” said Catholic priest Edwin Gariguez, executive secretary of the National Secretariant for Social Action, Justice and Peace of the Catholic Bishops’ Conference of the Philippines.—Reports from Julie M. Aurelio, Karl R. Ocampo, Marlon Ramos, DJ Yap and Tina G. Santos