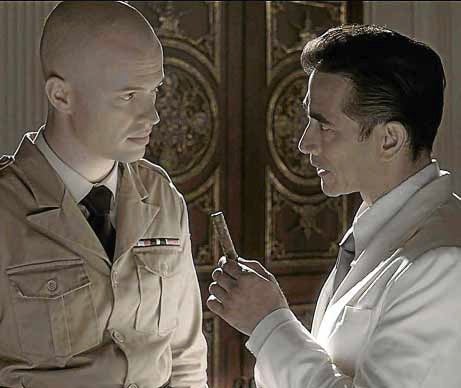 MOVIE SCENE Actors Raymond Bagatsing and David Bianco are shown in a scene from “Quezon’s Game,” a movie that Foreign Secretary Teodoro Locsin Jr. agrees to screen in Tel Aviv, where migrant workers and Israelis sympathetic to their plight have held protests against the deportation policy. —CONTRIBUTED PHOTO

MANILA, Phlippines — The Department of Foreign Affairs will adopt suggestions that Israel be reminded of Philippine efforts during Manuel Quezon’s presidency to save Jews fleeing from the Holocaust.

The suggestion by Philippine senators was prompted by deportation proceedings that have begun in Israel against children of Filipino workers who were born there.

Last week, Filipino migrant worker Rosemarie Perez and her 13-year-old son Rohan were flown out of Israel after a daylong delay due to legalities concerning their deportation.

Hundreds more are expected to be kicked out of the Jewish state amid concerns there of maintaining a Jewish majority.

At a Senate hearing on Monday, Foreign Secretary Teodoro Locsin Jr. agreed with the suggestion to screen the movie “Quezon’s Game” in Tel Aviv, where migrant workers and Israelis sympathetic to their plight had held protests against the deportation policy.

The film, which had a fairly long run in Manila cinemas this year, is based on Quezon’s policy to rescue Jews fleeing from Nazi persecution.

It was through his combined efforts with the Frieder brothers, a Manila-based Jewish family of businessmen, and American colonial officials sympathetic to this cause that an estimated 1,200 Jews were able to escape from Europe and immigrate to the Philippines, according to the website rescueinthephilippines.com.

Also according to that website, a documentary on that little-known chapter of prewar Philippines “has been purchased for broadcast on TV by the History Channel in Israel. This is one of the most important markets for the film, and we are thrilled to announce this significant distribution.”

Sen. Panfilo Lacson said President Quezon’s legacy should be invoked for the benefit of children of Filipino workers who were born in Israel and now faced deportation.

“Kindly remind them of Manuel Luis Quezon during the Holocaust, and maybe they would be more humane in treating our Filipino children there,” Lacson said.

“A little effort on the part of the embassy there for a little expense may show how ungrateful they are if they proceed with what they are trying to do,” Drilon said.

Locsin, in response, said, “It won’t even be considered. That will be done.”

“I said Quezon risked even more than his life, he risked his political career. For those of us who come from politics, believe me, that’s worth more than life,” he added.

“He [Quezon] had no authority to bring in the Jews, but he took them in because it was the decent thing to do. He could have been removed by the United States,” the foreign affairs chief added.