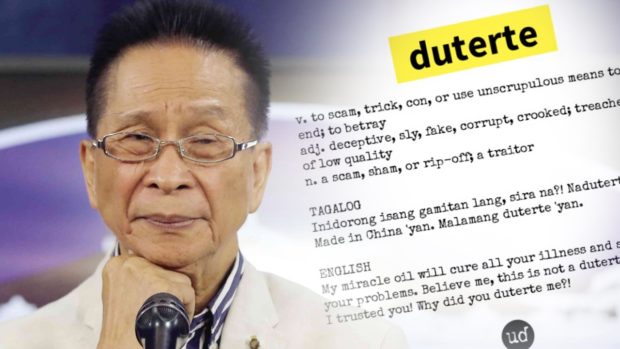 MANILA, Philippines — Malacañang isn’t buying Urban Dictionary’s definition to the word “Duterte” as a “scam, traitor, fake,” and “of low quality,” fielding its own description of the President’s surname.

Urban Dictionary is a crowdsourced online dictionary meant to give definition to various slang words. It recently released a meaning of “Duterte” after a netizen submitted the word, which Urban Dictionary now classifies as a verb, an adjective, and a noun.

READ: Urban Dictionary described Duterte in the most savage way

duterte: v. to scam, trick, con, or use unscrupulous means to a… https://t.co/nyKIkmcuEQ pic.twitter.com/GpEr1mQnTu

The Palace official then surmised that an “anti-Duterte” could be behind the given definition of “Duterte” in Urban Dictionary even if he refused to acknowledge at this point that the word in the online dictionary refers to the President or the First Family’s name.