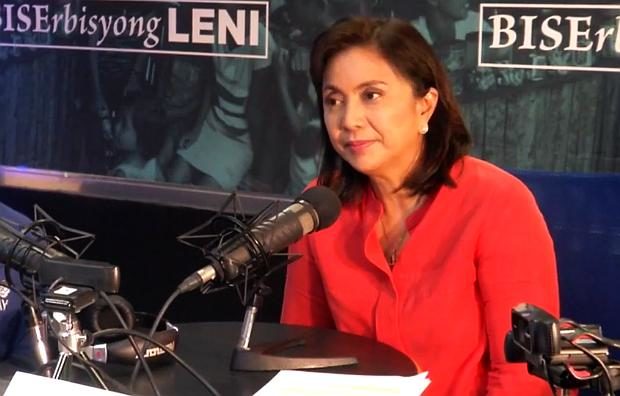 MANILA, Philippines – Vice President Leni Robredo urges Congress to pass the Sexual Orientation and Gender Identity and Expression (SOGIE) Equality bill in the light of a recent incident where a trans woman was barred from using a women’s restroom in a mall in Quezon City.

Robredo — one of the bill’s authors in the 16th Congress — the discrimination incident that trans woman Gretchen Diez supposedly experienced was a pressing reason to pass and enact the bill.

[I hope this incident, no matter how unfortunate, would be instrumental in making our lawmakers realize that it’s about time for the bill to be passed.]

[This has been put on hold for a long time.]

According to reports, Diez was about to enter a ladies’ room of Farmers Plaza in Cubao when Chayra Ganal, a female cleaning crew member, blocked her. Diez protested and tried to air her sentiments by going live on Facebook but she was accosted by a security guard.

Diez was eventually taken to Station 7 of the Quezon City Police District (QCPD), where Ganal planned to sue her for unjust vexation, but then she backed out. Diez was then brought to Camp Karingal, headquarters of the QCPD.

The incident was denounced by LGBTQIA+ members and supporters, including several celebrities and politicians like Vice Ganda, Ice Seguerra, Sen, Risa Hontiveros, all if whom are pushing for the passage of the SOGIE Equality bill.

READ: Celebs on trans woman barred from women’s restroom: ‘Fight for equality not over’

For Robredo, the incident could serve as an eye-opener.

[That should not have happened. But maybe it has to happen to open the eyes of others to the problems of the LGBTQ community exist. Some people are feigning blindness, and they’re not taking seriously these problems that we have in our midst.]

[This might be a way for many of our countrymen to realize that discrimination really happens, that we have people with us who should be enjoying the rights that everyone else is enjoying, but they could not because of discrimination.]

Another good thing, according to Robredo, that came out from the incident was that it prompted LGBTQIA+ members to frankly express their opinion about the issue.

[I’m happy that the members of the LGBTQ community are now more open, more courageous in coming out to express their sentiments. This is the kind of empowerment that we want, right?]

[And not only the empowerment of the LGBTQ but also of the poor, of the farmers, of the urban poor — we want to give them a voice. If we don’t give them a voice, we can’t consider what our poor, ordinary countrymen are going through.]