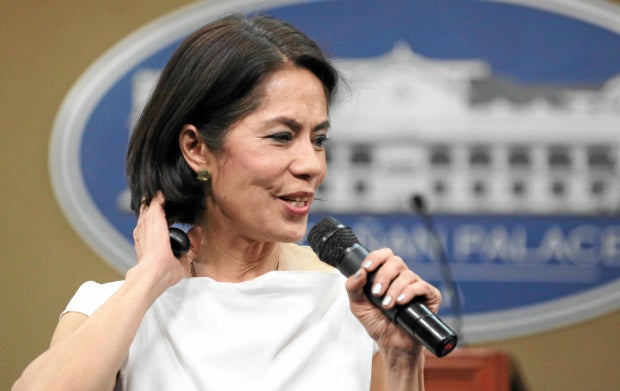 MANILA, Philippines — Senators on Monday mourned the death of former environment secretary Gina Lopez as they exalted her for her work as an environmental advocate.

“By her selfless works, Gina’s work was the confirmed environment secretary of the people, the minister for sustainable development, and the ambassador for children’s rights,” Senator Sonny Angara said in a statement.

“She spent a lifetime pouring her considerable talents in bringing to the mainstream the powerless and the voiceless who exist forgotten in the  margins of society,” he added.

He said Lopez “took the fight to where it matters – in boardrooms, chatrooms, government offices, and in her favorite office – out in the open, under a forest canopy or underwater, where she was in her element with people she loved in a country she never gave up hope on.”

Meanwhile, Senator Risa Hontiveros said the former environmental chief would be remembered as a fighter “against big polluters.”

“Gina fought with everything she had against big polluters,” Hontiveros said over Twitter.

Gina fought with everything she had against big polluters.

“She’ll always be remembered that way: as a fighter whose legacy will  be remembered by many. Salamat, Gina. Rest in peace,” she added.

Senator Francis Pangilinan also paid tribute to Lopez as he lauded the environmental advocate for her service.

“A woman of courage. Firebrand. That is how many will remember Gina Lopez — perhaps most prominent for her short stint as Secretary for the Environment and Natural Resources, but more significantly for me as child protection advocate,” he said in a statement.

“In or out of government, her life was about tireless creativity for all our collective future, through our children and our environment,” he added.

For Senate President Pro Tempore Ralph Recto, Lopez was the “secretary of defense of our natural resources.”

“Gina was not a debutante infatuated with green causes to which she had a passing fancy. She was a lifelong warrior for Mother Earth,” Recto said.

“She walked her talk, be it in defense of helpless children or displaced communities, or in nursing back to life polluted waters or ravaged forests,” he added.

Senators Grace Poe and Christopher “Bong” Go also mourned the passing of Lopez as they remembered her for her work as an earth warrior.

“Sec. Gina Lopez came in our midst and taught us love for mankind and the environment, our common home.Thank you for touching our lives in your impassioned way.” Poe said.

“May our prayers bring you peace and your family, comfort,” she added.

In a separate statement, Go described Lopez as a “fearless advocate and a tireless philanthropist.”

“As a former colleague in the government, I know how passionate, dedicated and humble she was as a public servant and as an Earth warrior,” he said.

“She was a fearless advocate and a tireless philanthropist, dedicating most of her life for the betterment of her fellow Filipinos.  Her exceptional dedication in protecting our environment has no equal today,” he added.

Senator Nancy Binay, meanwhile, commended Lopez for the contributions she made to sustainable tourism and environmental protection.

“Sec. Gina Lopez was such a passionate, selfless eco-warrior who has given much to the country. She has showed us the meaning of hope, and has inspired many of us in a big way,” she said in a statement.

“Her deep desire to focus on the positive, her peerless efforts to protect our environment and help the underprivileged will surely be missed,” she added.

For Senator Leila de Lima, the legacy Lopez had left behind will serve as “a beacon in these dark times.”

“As we deeply mourn her passing, we celebrate her life…Gina’s passion was contagious and her commitment to make this world a better place, an inspiration,” De Lima said.

“The legacy she left will be a beacon in these dark times, guiding us through seemingly insurmountable odds, as we continue the struggle for truth, justice and peace,” she added.

Lopez passed away at the age of 65 after she succumbed to brain cancer, ABS-CBN Corporation had confirmed.

As a staunch anti-mining advocate, Lopez ordered 23 mines shut and five others suspended. She also canceled 75 contracts for mining projects located in watersheds.

She was appointed as environment secretary by President Rodrigo Duterte in June 2016.

But in May 2017, the Commission on Appointments voted 16-8 through secret balloting to end her 10-month tenure, during which she nearly shut the mining industry of the Philippines, one of the world’s biggest exporters of nickel. /je