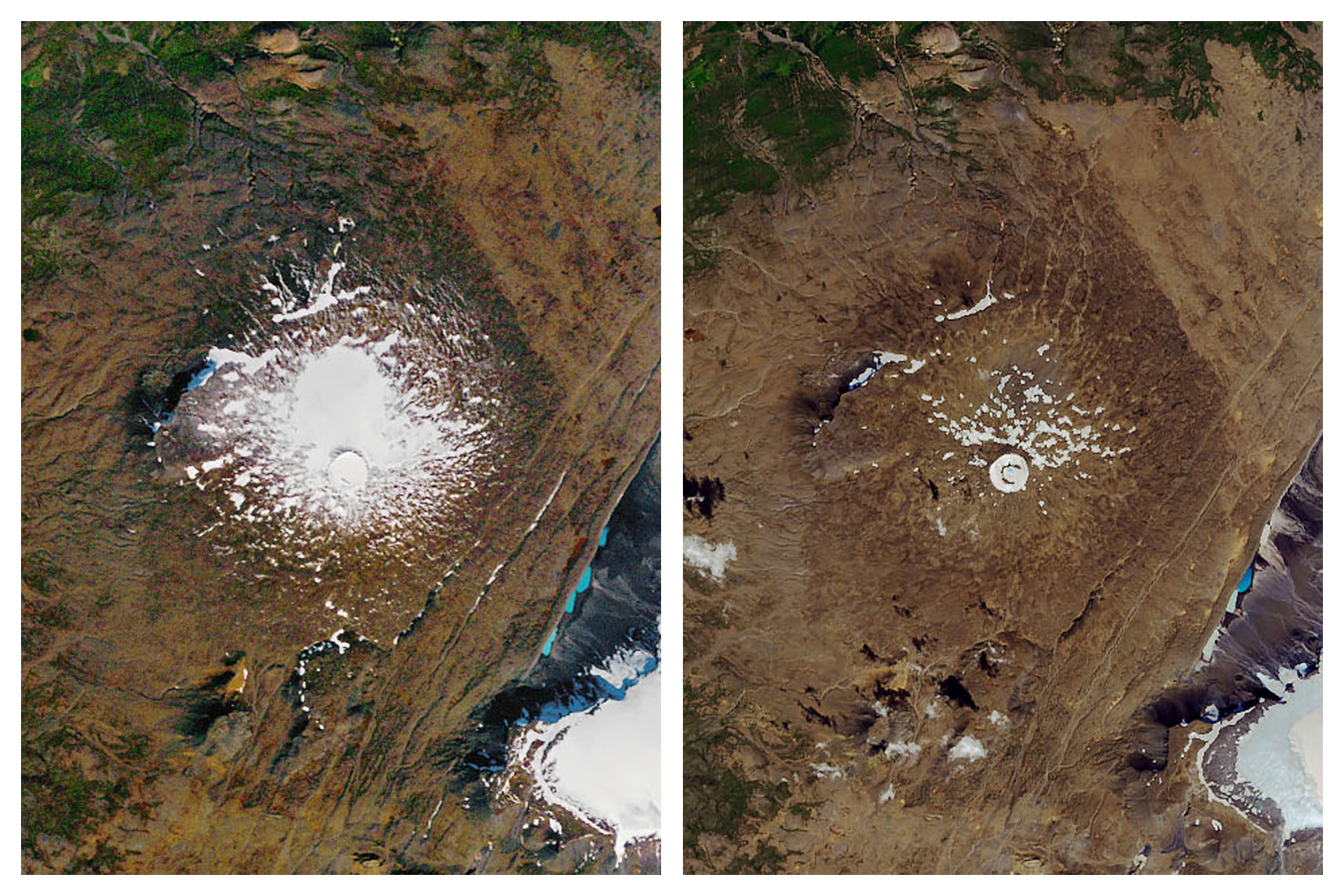 This combination of Sept. 14, 1986, left, and Aug. 1, 2019 photos provided by NASA shows the shrinking of the Okjokull glacier on the Ok volcano in west-central Iceland. A geological map from 1901 estimated Okjökull spanned an area of about 38 square kilometers (15 square miles). In 1978, aerial photography showed the glacier was 3 square kilometers. in 2019, less than 1 square kilometer remains. (NASA via AP)

REYKJAVIC, Iceland — Iceland on Sunday honors the passing of Okjokull, its first glacier lost to climate change, as scientists warn that some 400 others on the subarctic island risk the same fate.

A bronze plaque will be unveiled in a ceremony starting around 1400 GMT to mark Okjokull — which translates to “Ok glacier” — in the west of Iceland, in the presence of local researchers and their peers at Rice University in the United States, who initiated the project.

“This will be the first monument to a glacier lost to climate change anywhere in the world,” Cymene Howe, associate professor of anthropology at Rice University, said in July.

The plaque bears the inscription “A letter to the future,” and is intended to raise awareness about the decline of glaciers and the effects of climate change.

“In the next 200 years all our glaciers are expected to follow the same path. This monument is to acknowledge that we know what is happening and what needs to be done. Only you know if we did it,” the plaque reads.

It is also labelled “415 ppm CO2,” referring to the record level of carbon dioxide measured in the atmosphere last May.

“Memorials everywhere stand for either human accomplishments, like the deeds of historic figures, or the losses and deaths we recognize as important,” researcher Howe said.

“By memorialising a fallen glacier, we want to emphasize what is being lost — or dying — the world over, and also draw attention to the fact that this is something that humans have ‘accomplished’, although it is not something we should be proud of.”

Howe noted that the conversation about climate change can be abstract, with many dire statistics and sophisticated scientific models that can feel incomprehensible.

“Perhaps a monument to a lost glacier is a better way to fully grasp what we now face,” she said, highlighting “the power of symbols and ceremony to provoke feelings”.

Iceland loses about 11 billion tonnes of ice per year, and scientists fear all of the island country’s 400-plus glaciers will be gone by 2200, according to Howe and her Rice University colleague Dominic Boyer.

Glaciologists stripped Okjokull of its glacier status in 2014, a first for Iceland.

In 2014, “we made the decision that this was no longer a living glacier, it was only dead ice, it was not moving,” Oddur Sigurdsson, a glaciologist with the Icelandic Meteorological Office, told AFP.

To have the status of a glacier, the mass of ice and snow must be thick enough to move by its own weight. For that to happen the mass must be approximately 40 to 50 meters thick, he said.

According to a study published by the International Union for Conservation of Nature (IUCN)in April, nearly half of the world’s heritage sites could lose their glaciers by 2100 if greenhouse gas emissions continue at the current rate.

Sigurdsson said he feared “that nothing can be done to stop it.”

“The inertia of the climate system is such that, even if we could stop introducing greenhouse gases into the atmosphere right now, it will keep on warming for century and a half or two centuries before it reaches equilibrium.”

Iceland’s Vatnajokull National Park, which was added to UNESCO’s World Heritage List in early July, is home to, and named after, the largest ice cap in Europe.