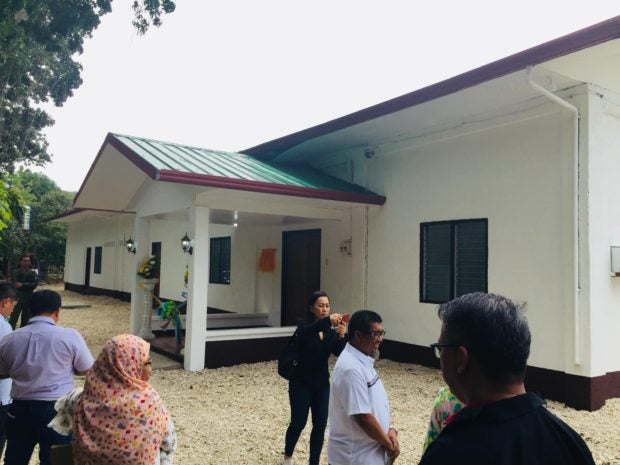 LIFE AFTER BANDITRY Recently inaugurated in Isabela City, Basilan, the Baithus Salam—or “House of Peace” in the Yakan dialect—is intended for the reformation of some 200 Abu Sayyaf fighters who have surrendered to the government since 2016. —JULIE ALIPALA

There is nothing extraordinary about the building that houses an office, sleeping quarters and a prayer room, among others. But its name — Baithus Salam, or “House of Peace” — makes it stand out in a land that has known violence and strife for decades.

Inaugurated last week, the facility is dedicated to the reformation of former members of the Abu Sayyaf, a group of bandits that has bedeviled Basilan’s growth and progress since its inception almost 30 years ago.

The presence of the facility inside the Army camp demonstrates how the military has been using a noncombat approach in dealing with the group — some factions of which have pledged allegiance to the Islamic State and laid siege on Marawi City in 2017.

In previous years, Basilan has endured massive military assaults to quash the Abu Sayyaf, which had been behind high-profile crimes targeting both local and foreign victims.

In neighboring Sulu, military operations continue against the group, as it has been linked to the bombing of the Jolo cathedral in January this year.

Army Brig. Gen. Fernando Reyeg, commander of Joint Task Force Basilan, said the House of Peace will be the nerve center for the collaboration of the Army, the Basilan provincial government and Cagayan de Oro-based Balay Mindanaw in helping reform Abu Sayyaf surrenderers.

The operation of the new facility is part of the Program Against Violent Extremism (PAVE), which was launched by the now-defunct Autonomous Region in Muslim Mindanao (ARMM)  and is now continued by the provincial government.

Since 2016, the program has facilitated the surrender of some 214 former Abu Sayyaf fighters who were driven to the hills by the thought that banditry would improve their social and economic lot.

Many of them have been largely unschooled as they had joined the group when they were in their early teens.

Under PAVE beneficiaries are given assistance for livelihood, education and housing. They are also offered continuous values formation interventions.

More than half of the Abu Sayyaf surrenderers have enrolled in the Department of Education’s Alternative Learning System (ALS) program. To date, 49 of them have successfully completed the 10-month school work that qualified them for higher studies.

The others opted for technical and vocational training and are now either employed or running their own small businesses using their newfound skills.

The 300-square-meter House of Peace is run by Balay Mindanaw. According to Reyeg,  it will be used mainly for livelihood training sessions and personality development activities for the former bandits.

Reyeg said he expected more Abu Sayyaf members to turn their backs on crime, as shown by the response of the communities in Basilan to PAVE. Likewise, he said some members may surrender after seeing how the lives of their former colleagues have changed for the better.

The facility will also serve as a halfway home for the former bandits before they are fully reintegrated into their respective communities, Reyeg said.

Motong Indama, a former Abu Sayyaf subleader in Basilan, said the opening of the House of Peace “cemented their trust in the security forces and local government units in the province.”

“We now have a place to gather,” said Indama, citing the importance of exchanging views and experiences with fellow ex-combatants as they learn the ropes of a life outside banditry.

Indama has just completed the ALS and is looking forward to pursuing a college degree.

Former ARMM governor and now Basilan Rep. Mujiv Hataman underscored the need for the government to win the trust of the people, especially the Abus, and show that government will make a difference in their lives so that they will shun  activities such as banditry.

“The presence of government has to be felt by the people. We have to show them that government is sincere in providing basic services,” Hataman said.

“These people would have not been in the jungle if there was a strong government here in the past,” he said.

Basilan is now enjoying relative peace, Hataman said, with “hardly any report of military encounter in the mountains. We see growth in tourism and an increasing number of people visiting the province.”

“We are harvesting the fruits of peace and these efforts should not only be attributed to the Armed Forces but to the local government units and the populace,” Sobejana said.