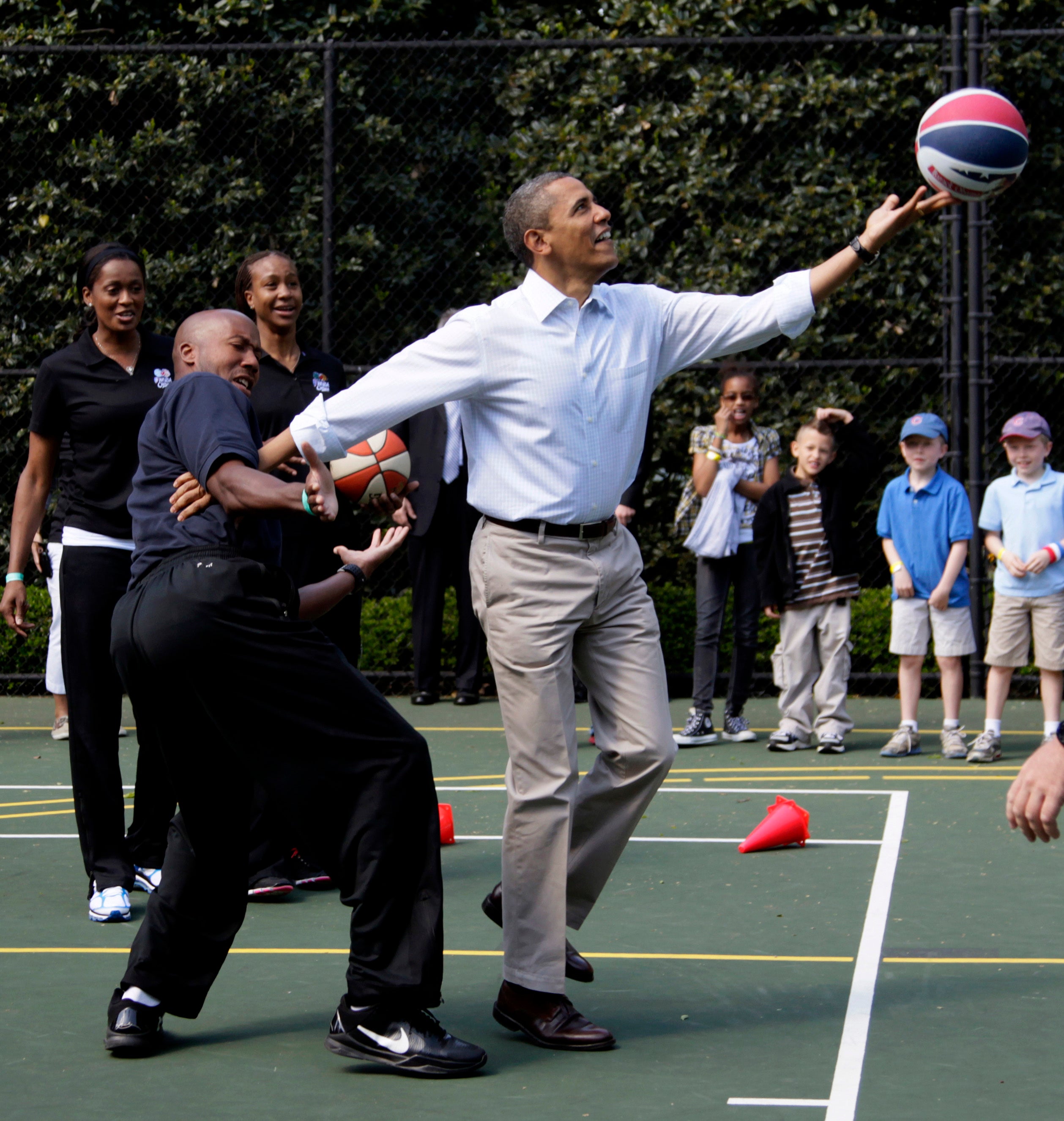 FILE – In this April 9, 2012, file photo, President Barack Obama plays basketball with former NBA basketball player Bruce Bowen during the annual White House Easter Egg Roll at the White House in Washington. Bidding was drawing to a close Friday, Aug. 16, 2019, for a basketball No. 23 Punahou School jersey believed to have been worn by President Barack Obama. Obama the wore that number during the 1978-79 school year in Honolulu. (AP Photo/Carolyn Kaster, File)

HONOLULU  — Bidding was drawing to a close Friday for a basketball jersey believed to have been worn by President Barack Obama.

Peter Noble was a student at a prestigious and elite Honolulu prep school when he grabbed a basketball jersey that was destined for the trash. Years later he saw an old photo of Obama, a fellow Punahou School alumnus, wearing the No. 23 jersey while a guard on the 1979 Hawaii state championship team. This undated photo released by Heritage Auctions shows a Punahou High School basketball jersey worn by former student Barack Obama. Bidding was drawing to a close Friday, Aug. 16, 2019, for the basketball No. 23 Punahou School jersey believed to have been worn by President Barack Obama. Obama wore that number during the 1978-79 school year in Honolulu. (Heritage Auctions via AP)

Noble, who was three years behind the future president at Punahou, said he took the jersey because he also played basketball with that number.

“I took it because they were getting rid of it,” said Noble, now 55 and living in Seattle. “It meant nothing else, really.” Noble grew up “idolizing” Punahou basketball, he said.

It wasn’t until Obama was elected president that Noble saw the photograph. He thought it was interesting and showed the jersey off to friends out of pride for Punahou. “I talk about Punahou and Punahou athletics perhaps the way an Alabama fan talks about Roll Tide,” he said, referring to University of Alabama’s rally chant.

Mostly, the shirt remained in his closet, following him during moves to various cities.

“I got to thinking: Is there an opportunity to do something, perhaps good?” he said. “Perhaps have this a see a bigger, broader light of day than sitting in my closet.”

Noble connected with Heritage Auctions of Dallas and as of Friday morning, the bid was at $43,000. The sale result will be announced Sunday.

The auction house said every detail on the shirt matches the one Obama is photographed wearing. “We can see the multiple years of wear in the softness of the tackle twill identifiers and the ‘Rawlings (size) 40’ label at lower right front tail, and even a scattering of small stains consistent with blood, perhaps Obama’s,” says a description of the auction item. “A patched repair at lower front left likewise documents the long, rough-and-tumble history of the historic garment.”

Punahou spokesman Robert Gelber said the school is “enormously proud” of Obama, but cannot confirm authenticity of the jersey.

“We simply cannot make comment on the authenticity of the jersey itself,” he said. “It’s not something we are able to do.”

Obama, who mostly sat on his bench during his Punahou basketball days, couldn’t be reached for comment.

The school will receive an undisclosed portion of the sale, Noble said, “because I owe so much to Punahou.”

He joked that another jersey might have been more valuable to him, personally.

“In hindsight, I wish I had grabbed No. 5 because it was Darryl Gabriel and Darryl Gabriel was my favorite player,” he said. According to Punahou, Gabriel led Obama and their teammates to the state basketball championship. /muf