Japan under pressure over past hunting of endangered whales 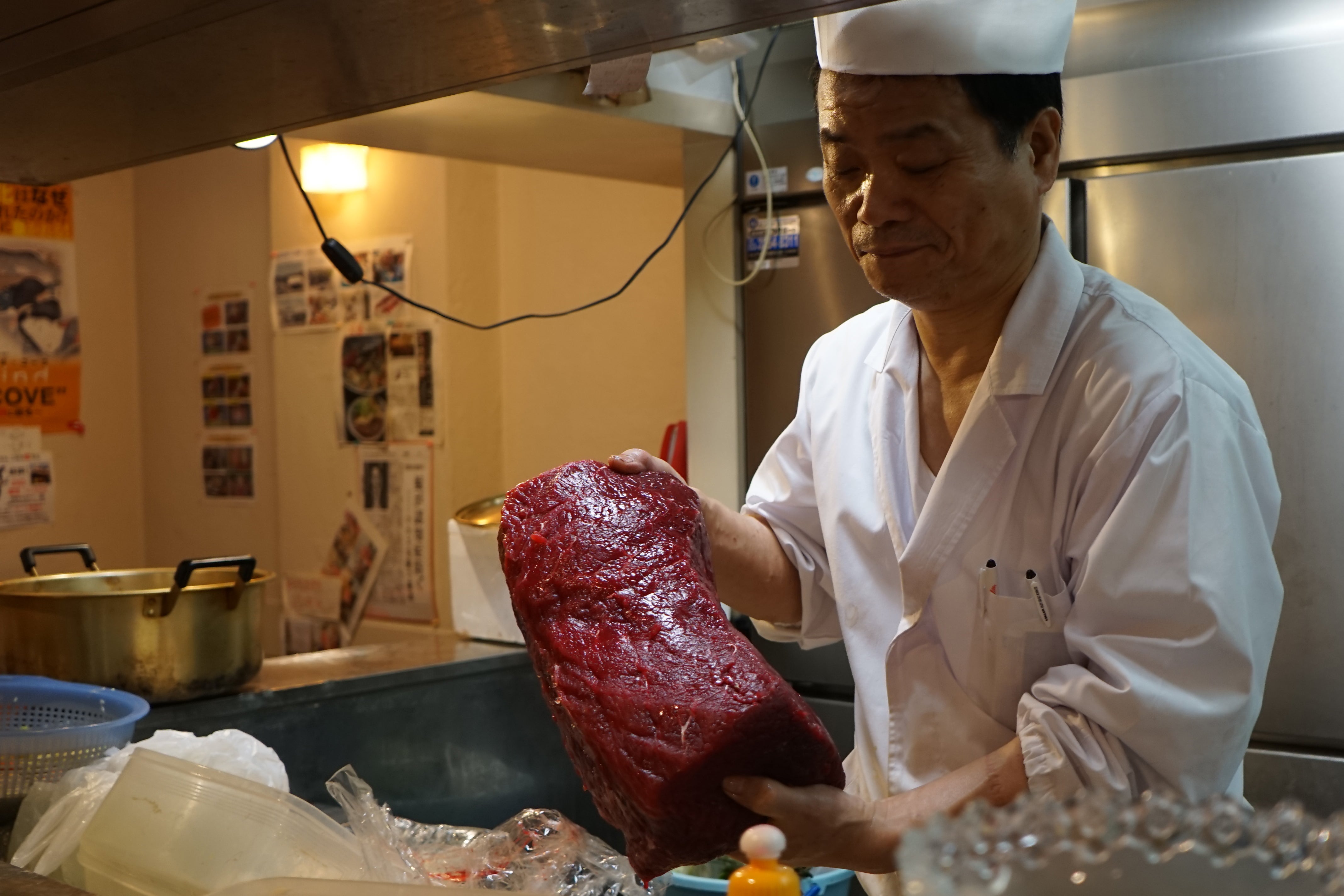 This July 2, 2019 picture shows a chef holding a whale meat at a restaurant in Tokyo. – Japan’s resumption of commercial whaling has prompted fury from other countries and campaigners, with activists saying that one of the three species targeted is threatened with extinction and sub-populations of the other two are depleted. (Photo by Karyn Nishimura / AFP)

GENEVA — Japan insisted Friday it no longer hunts endangered sei whales in international waters, but faced accusations of still violating a wildlife treaty by allowing commercialization of meat from past catches.

The standing committee of the Convention on International Trade in Endangered Species of Wild Fauna and Flora (CITES) last October found Japan in breach of the treaty and ordered it to rectify the situation or face trade sanctions.

The elected panel, which handles the treaty’s compliance and enforcement, dismissed Japan’s claims that the cull since 2002 of some 1,500 North Pacific sei whales was only scientifically motivated.

Instead, it found that the hunt was primarily commercially motivated, and thus constituted international trade in a protected species and a clear violation of the treaty.

Japan told the committee meeting in Geneva on Friday that it no longer permits the hunting of sei whale on the high sea and is therefore in compliance with CITES.

“This matter should be considered closed,” a member of the Japanese delegation said, a day before a global conference of all 183 countries that have signed the treaty kicks off in Geneva.

But committee members from a range of countries, including the European Union, Israel, Niger, Peru and the United States, disagreed.

Many voiced outrage at the continued sale of meat and blubber from the whales deemed to have been illegally culled and imported over a 16-year period.

According to conservationists, 1,500 tonnes of meat from 131 sei whales killed in 2018 alone have been commercialized in Japan, and sei whale meat remains widely available in shops and restaurants in the country.

“It is truly shocking,” the representative from Niger told the meeting, maintaining that when illegal international trade is detected in other endangered species, such as elephant ivory, the stockpiles are ordered confiscated and destroyed.

The European Union representative agreed, pointing to article 8 of the convention, which he said “requires … confiscating specimens traded, or in this case introduced from the sea, in violation of CITES.”

Japan meanwhile stressed that it had immediately followed the committee’s October ruling, but balked at the idea it should be applied retroactively.

In the end, the committee ordered Japan to report back on its use of the sei whale stockpiles, but put off the thorny discussion on confiscation until next year.

Juan Carlos Vasquez, in charge of legal affairs at the CITES secretariat, told AFP the issue was complex and would likely spark a lengthy debate, but said he did not think it was fair to compare Japan’s sei whale meat stockpile with stockpiles of illegal ivory.

The illegal ivory trade is “clearly conducted by criminal syndicates,” he said, stressing that Japan’s sei whale hunt on the other hand was conducted by scientific institutes.

“Everything is traced, registered, controlled,” he said, adding that while CITES had rebuked Japan over its motives for the whaling, it was clear that “these are not criminals hunting whales.”

While Japan remains bound by CITES international wildlife trade restrictions, it has withdrawn from the International Whaling Commission (IWC), enabling it last month to resume commercial whaling in its territorial waters for the first time in decades.

It has allotted itself a hunting quota of 227 of the giant sea mammals this year, including 25 sei whales. /muf