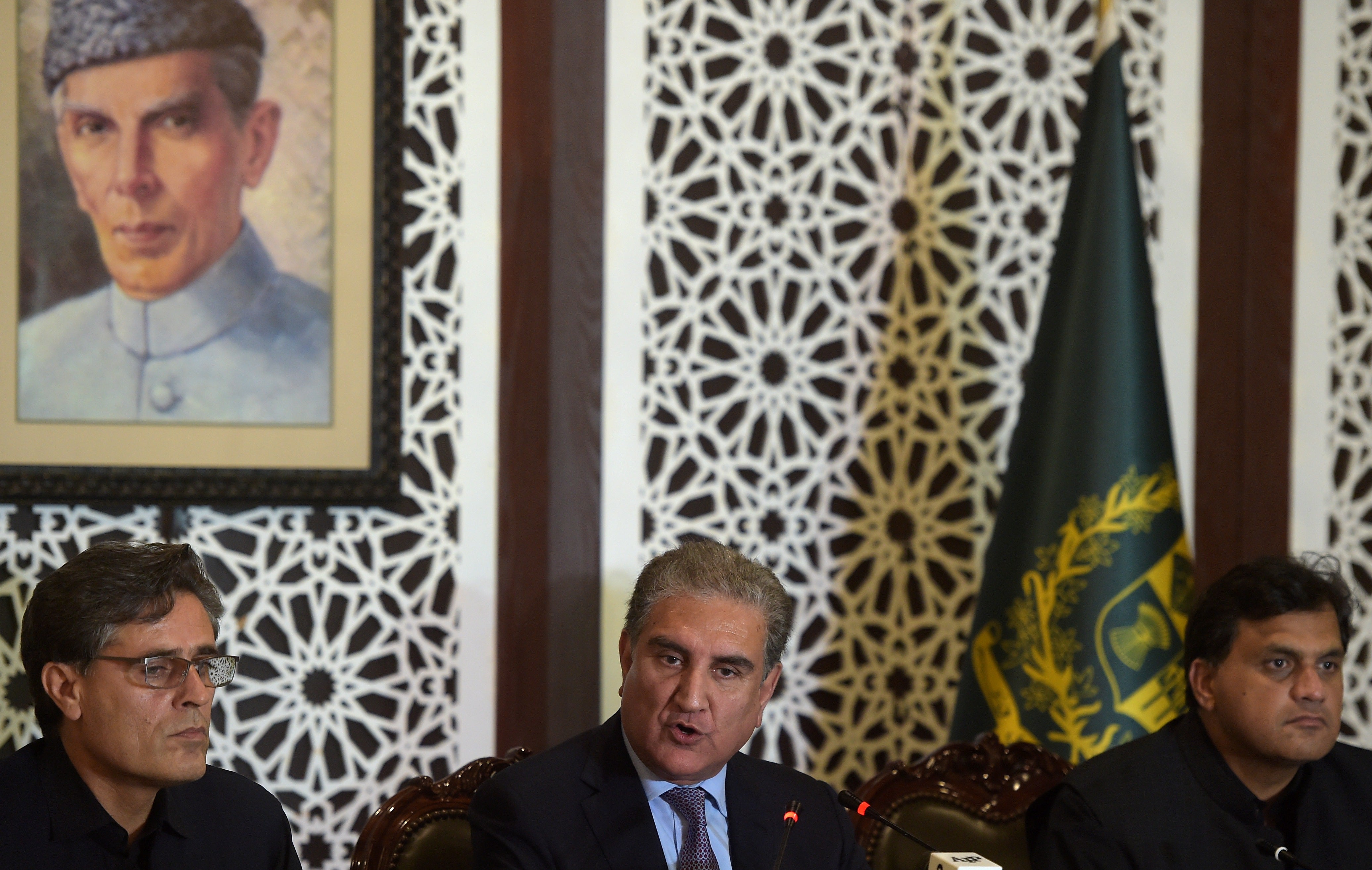 Pakistani Foreign Minister Shah Mehmood Qureshi (C) gives a press conference at the Foreign Ministry in Islamabad on August 16, 2019. – Pakistani Prime Minister Imran Khan spoke to US President Donald Trump about his concerns over the situation in disputed Kashmir region, Islamabad’s foreign minister said, ahead of a UN Security Council meeting to discuss the issue. (Photo by AAMIR QURESHI / AFP)

SRINAGAR, India —  Hundreds of protesters in Indian-administered Kashmir clashed with police Friday as New Delhi seethed at a rare UN Security Council meeting about the disputed Muslim-majority region — the first in nearly 50 years.

Tensions are high since India earlier this month stripped the part of Kashmir that it controls of its autonomy, a move which sparked calls from Pakistan for the international community to intervene on the decades-old issue.

But India’s ambassador to the UN, Syed Akbaruddin, expressed annoyance over any outside help or suggestions.

“We don’t need international busybodies to try to tell us how to run our lives. We are a billion plus people,” he said, after the council talks, which were requested by Pakistan and China.

In the first week of August, India ended Kashmir’s autonomous status, stepping up movement restrictions and cutting off phone and internet access.

Kashmir has been divided between India and Pakistan since independence from Britain in 1947, and has been the spark for two major wars and countless clashes between them.

In Srinagar, the main city in Indian-administered Kashmir, police fired tear gas and pellet-firing shotguns to disperse residents who tried to march down the main road after Friday prayers.

Protesters hurled stones and used shop hoardings and tin sheets as improvised shields, as police shot dozens of rounds into the crowd. No injuries were reported.

“We are trying to breach the siege and march to the city centre but police is using force to stop us,” one protester told AFP.

In New York, the Security Council meeting was the first since 1971 to discuss Kashmir.

Pakistan’s ambassador to the world body hailed the meeting as evidence the region’s troubles were an “internationally recognized dispute.”

“The voice of people of occupied Kashmir have been heard today by the highest diplomatic forum of the world,” Maleeha Lodhi told reporters.

The meeting came after Khan spoke with Trump by telephone to express his concerns over India’s actions, according to Pakistani Foreign Minister Shah Mehmood Qureshi.

“He apprised him of the situation on the Indian side of Kashmir, how delicate, how concerning and how alarming it was and it is and how concerned we are that by this unilateral action, India has precipitated and has threatened regional peace and security,” he said in Islamabad.

During a meeting with Khan in July, Trump said that Indian Prime Minister Narendra Modi had asked him to help mediate the Kashmir dispute — a claim Delhi strenuously denied.

India has always insisted the Kashmir issue can only be resolved bilaterally with Pakistan.

Earlier this year, the rivals again came close to all-out conflict, after a militant attack in Indian-held Kashmir in February was claimed by a group based in Pakistan, igniting tit-for-tat air strikes.

Sporadic clashes were reported Friday in other parts of the Kashmir Valley, the main hotbed of resistance to Indian rule for decades.

Major towns and cities in the valley remained under curfew, with government forces allowing people to move only on special passes.

No big gatherings were allowed in the valley and most mosques were shut for the second consecutive Friday.

The protesters marched along the lanes of Srinagar, carrying black ﬂags — signifying grief — and placards with slogans including “Go India, go back”.

Fearing an angry and potentially violent response to its move to end Kashmir’s autonomous status, India deployed 10,000 additional troops — joining the half a million already there — severely restricted movement and cut telecommunications.

At the U.N., India’s envoy said the restrictions were “reasonable” and are being eased.

A top official said that authorities would begin restoring phone lines in Kashmir on Friday evening, including in Srinagar.

Jammu and Kashmir chief secretary BVR Subrahmanyam did not make clear whether mobile phones and internet connections would also be reinstated.

He said the restoration would “(keep) in mind the constant threat posed by terrorist organizations”.

Kashmiri politicians — alongside university professors, business leaders and activists — are among the more than 500 people that have been taken into custody since the lockdown began.

A week ago, residents said some 8,000 people took to the streets in defiance of the lockdown and that the military used pellet-firing shotguns against them.

The Indian government confirmed the clashes only after several days had passed, blaming them on stone-throwing “miscreants” and saying its forces reacted with “restraint”.

Tens of thousands of people, most of them civilians, have died in an uprising against Indian rule that has raged since 1989.  /muf