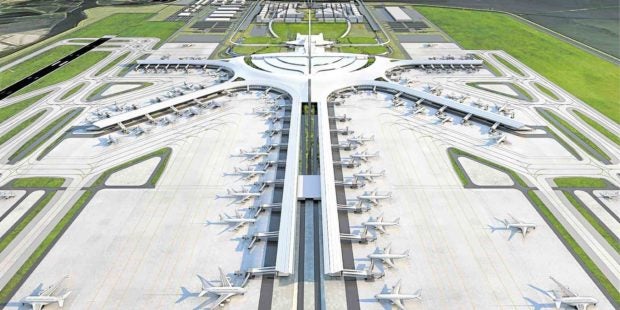 MANILA, Philippines – An environmental advocacy group has called on the Department of Environment and Natural Resources (DENR) to revoke the reclamation clearance given to San Miguel Corporation (SMC), developer of the proposed Bulacan International Aerotropolis.

Kalikasan People’s Network for the Environment (Kalikasan PNE) said on Thursday that the Aerotropolis’ reclamation project has not assessed the environmental problems that may arise, especially its impact on Manila Bay’s ecosystem.

“The ECC issuance to the Bulacan Aerotropolis covered just the land preparation, not the entire infrastructure. No ECC must be issued to any aspect of the Aerotropolis until its cumulative risks posed to the entire ecosystem of Manila Bay alongside other reclamation projects is rigorously assessed,” Kalikasan PNE national coordinator Leon Dulce said in a statement.

“We thus demand the revocation of the Aerotropolis ECC because there is no way such shoddy work can effectively mitigate its threat of destruction to mangroves and fish conservation areas,” she added.

Dulce also challenged President Rodrigo Duterte — who has previously called for the restoration of the famed Manila Bay — to take a stand against the project. And if Duterte does not do anything, Dulce said it makes him a “hypocrite.”

“[The railroading of the Aerotropolis ECC may very well be] the first glaring case of President Rodrigo Duterte’s hypocrisy over Manila Bay,” he said.

“If Duterte is true to his word of wanting to rehabilitate Manila Bay, he should start by working on instrumentalizing these zonings instead of allowing runaway reclamation projects to get away with ecocidal murder,” he added.

Duterte was also reminded of executive orders he issued which lays requirements prior to reclamation projects, along with the declaration of Manila Bay’s northern part as a Key Biodiversity Area.

“Duterte’s Executive Order 74 s. 2019 supposedly reiterated the requirement of assessing any reclamation project’s cumulative impacts to Manila Bay before getting permits. EO 74 also required that reclamation projects should be compliant to a Reclamation Development Plan and other relevant master plans–plans that are at date non-existent,” Dulce said.

“The northern part of Manila Bay to which Bulacan belongs to has already been declared a Key Biodiversity Area in the early part of the 2000s. It is also a potential Important Bird Area, a potential Ramsar Wetlands of International Importance site, and a sardine conservation area,” he explained.

Last August 1, it was announced that SMC has bagged the project, with the government not needing to spend anything for the airport’s construction. Project cost is estimated to be around P734 billion, while construction is seen to start before 2019 ends.

This new airport is aimed at decongesting Ninoy Aquino International Airport (Naia). It will cover around 2,500 hectares in Bulakan, Bulacan, — just 50 kilometers northwest of Metro Manila.

Designs released to the media showed that the Aerotropolis would have at least four parallel runways and a passenger capacity of more than 100 million.

Aside from Kalikasan PNE, other environment-oriented groups like Agham have called for the revocation of the environmental clearance given to Silvertides Corp., which was tapped by SMC for landfilling activities.

“All these provisions have already been violated by the Aerotropolis. How can the government issue an ECC for the Aerotropolis despite this full disregard of our national policies?” Dulce asked./ac