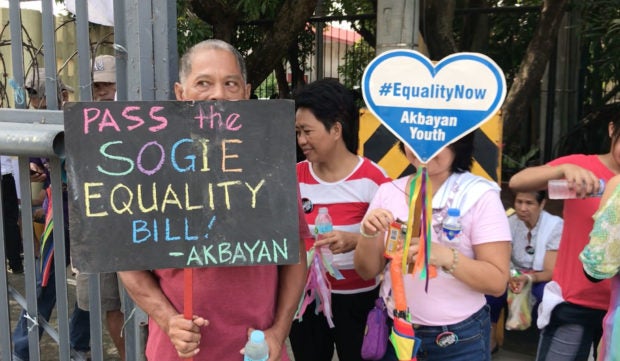 Zubiri offered these two solutions following the arrest of a transgender woman, Gretchen Diez, who was barred to use the ladies room in a mall in Cubao, Quezon City last Tuesday.

Diez was nabbed for unjust vexation when she documented the incident.

“It’s time that we should debate it on the floor and put a vote to it. Tingnan natin kung sino sa amin ang susuporta,” Zubiri said in an interview at the Senate on Thursday.

Zubiri even compared the issue to other contentious measures like the death penalty and divorce where he expects his colleagues to vote based on their conscience.

While he is inclined to support the Sogie bill, the senator likewise backed the passage of Senator Sonny Angara’s anti-discrimination bill.

“It could be a happy compromise e…” Zubiri said, explaining that Angara’s bill would eliminate all kinds of discrimination.

While claiming to be a pro-LGBT, neophyte Senator Ronald “Bato” dela Rosa said he would rather wait for a law that would address this problem.

Dela Rosa noted that many Filipinos are still conservative and some may not be ready yet to share a common restroom with other genders.

Because what if a man pretends to be gay just to be allowed entry to women’s restroom?

Senator Cynthia Villar said she also has no problem with the Sogie bill.

But in the meantime that the bill is not yet passed into law, Villar suggested that the LGBT members be allowed to use the restroom for persons with disabilities (PWD).