TOKYO – Emperor Naruhito expressed “deep remorse” over Japan’s role in World War II in his first appearance at the annual ceremony marking the end of the hostilities. 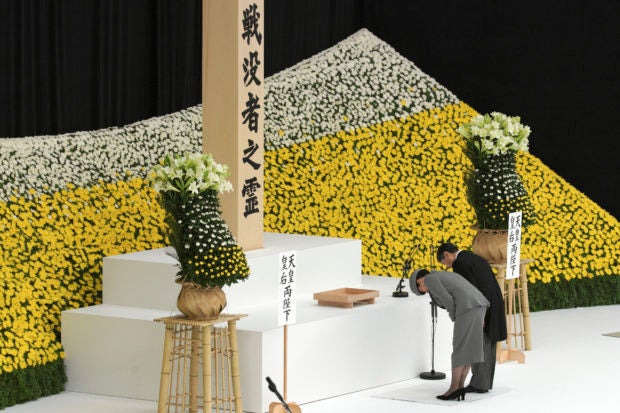 Japanese Emperor Naruhito, accompanied by Empress Masako bows after delivering a speech before the main altar decorated with huge bank of chrysanthemums during a memorial ceremony for the war dead at Nippon Budokan Martial Arts Hall in Tokyo Thursday, Aug. 15, 2019. Japan marked Thursday the 74th anniversary of the end of World War II. (AP Photo/Eugene Hoshiko)

The 59-year-old Naruhito is Japan’s first emperor born after the war, and his remarks Thursday closely followed the stance of his father, Akihito, who abdicated in May.

“Reflecting on our past and bearing in mind the feelings of deep remorse, I earnestly hope that the ravages of war will never be repeated,” Naruhito said in a short speech at an event in Tokyo marking the 74th anniversary of Japan’s surrender.

Looking nervous and his voice slightly trembling, Naruhito pledged to reflect on the wartime past and expressed hope that the tragedy should never be repeated. Empress Masako, in a gray suit and a hat, quietly stood by his side, her head slightly lowered.

Naruhito has promised to follow in the footsteps of his father, who committed his career to making amends for a war fought in the name of Hirohito — the current emperor’s grandfather. Though Akihito has avoided a direct apology, he has subtly stepped up his expressions of regret over the past years in carefully scripted statements on the war.

In sharp contrast, Prime Minister Shinzo Abe did not apologize or acknowledge Japanese wartime atrocities in Asia and elsewhere. Instead, he made a long list of damage inflicted on Japan and its people, including the U.S. atomic bombings of Hiroshima and Nagasaki, massive fire bombings of Tokyo and the fierce battle of Okinawa.

The emperor’s words have taken on greater importance and caught attention as Abe has increasingly sought to whitewash Japan’s troubled and embarrassing past since taking office in December 2012. Abe has since stopped acknowledging Japan’s wartime hostilities in his Aug. 15 speech, ending a tradition that past prime ministers had handed down since the 1995 apology by a Socialist leader Tomiichi Murayama.

Abe made no reference to Japan’s ongoing dispute with South Korea over trade and compensation demands over brutal treatment of Korean laborers during Japanese colonization of the Korean Peninsula in 1910-1945. He pledged that Japan will  reflect on lessons from history and will not repeat the devastation of war, while joining international efforts to tackle world problems.

Abe, however, stayed away from a Tokyo shrine that honors convicted war criminals among the war dead, and instead sent a religious offering, a gesture to avoid angering China and South Korea, which consider the Yasukuni shrine as a symbol of Japan’s militarism. /gsg