Trump on summer vacation but not in summery mood 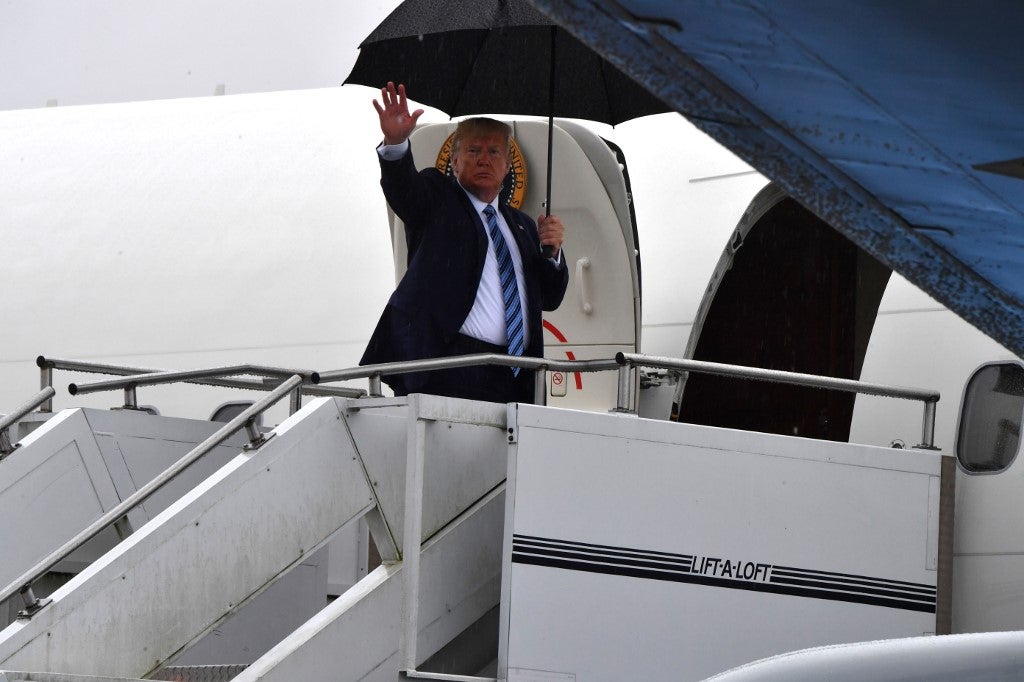 US President Donald Trump boards Air Force One at Pittsburgh International Airport in Pennsylvania on August 13, 2019, before returning to his Bedminster golf club in New Jersey where he is spending his summer vacation. (Photo by Nicholas Kamm / AFP)

“It’s never a vacation,” he said before leaving the White House last Friday for the 10-day non-vacation at his luxury golf club in Bedminster, New Jersey.

The former real estate dealer and television entertainer wants everyone to know that he neither wants nor needs time off.

“I like working. I’d rather be right here,” he said in the Oval Office.

That claim is part of the macho, deal-making, never-sleeping New Yorker persona that Trump has spent decades building.

But there’s at least something to it.

Since arriving at the Trump National Golf Club, the 45th president has not exactly shown signs of wanting to get away from it all.

He started immediately with campaign fund raisers in the Hamptons on Long Island, where he raked in $12 million. On Tuesday, he returned to Air Force One for a wildly freewheeling speech at a Shell petrochemical factory in Pennsylvania.

On Thursday, he flies up to New Hampshire for a re-election rally.

Trump has maintained a steady stream of pronouncements, ranging from retweeting a bizarre conspiracy theory to statements on the China trade war and other major affairs of state.

Of course, all presidents have to work on vacation.

Even when Trump rides his golf cart, a military aide is somewhere nearby with the nuclear “football” that contains the launch codes for nuclear weapons.

Advisors and experts are instantly contactable or even at his side. Secret Service bodyguards, supplemented by a small army of other law enforcement, deploy around the clock, along with the Beast limousine, the Marine One chopper and Air Force One jet.

The same goes for every other White House occupant.

Barack Obama enjoyed returning to his home state of Hawaii. Like Bill Clinton before him, he also spent time in the preppy east coast haven of Martha’s Vineyard. George W. Bush loved his ranch down in Crawford, Texas, where he’d clear brush to work out the frustrations of being cooped up in Washington.

But they were all on call, all the time.

In 1983, Ronald Reagan cut short a stay at his California ranch when he got news that the Soviet Union had shot down a Korean Airlines flight. In 2005, George W. Bush blundered by staying at his ranch when the deadly Hurricane Katrina made landfall, before going on to devastate New Orleans.

His presidential style — whether insulting opponents, talking to foreign leaders, or campaigning incessantly for re-election — depends on constantly dominating headlines.

“This guy’s different,” says James Thurber, an expert on the presidency at American University.

“He never stops the politics. He uses these breaks also to have rallies. He’s in the permanent campaign mode and uses language to stir up his base and be the lead story,” he said.

“It’s his strategy but I think it’s also embedded in his personality. He has great ego needs.”

Just like regular folk, the president’s choice of vacation destination says a lot about the vacationer.

A century and a half ago, Ulysses S. Grant was the first sitting president to stay on Martha’s Vineyard. Many followed, drawn by the island atmosphere and the chance to be among a lot of other rich, well-connected people.

George W. Bush and Reagan liked getting back to their roots in the great expanses of what was once cowboy country. John F. Kennedy had his “Kennedy Compound” in Hyannisport, Massachusetts, while George H.W. Bush had his own family pile in Kennebunkport, Maine.

Trump, a scrappier, newer-money kind of rich, has never really been part of the chi-chi coastal crowd. They’d probably feel equally unenthusiastic about New Jersey, which, undeservedly or not, is the butt of countless jokes.

“I believe there’s an intelligence to the universe, with the exception of certain parts of New Jersey,” as Woody Allen quipped in the movie “Sleeper.”

But Trump sees little of the state, staying holed up at his golf club, where joining has been reported to cost something around $350,000.

In winter, he takes time off at another of his golfing resorts, the Mar-A-Lago Club in sunny Florida.

Most of the time, the public has no idea what’s happening inside the security cordon. With the president in residence, these are the ultimate gated communities.

But when the White House publishes that daily advisory saying Trump “has no public events scheduled,” only one thing is sure.