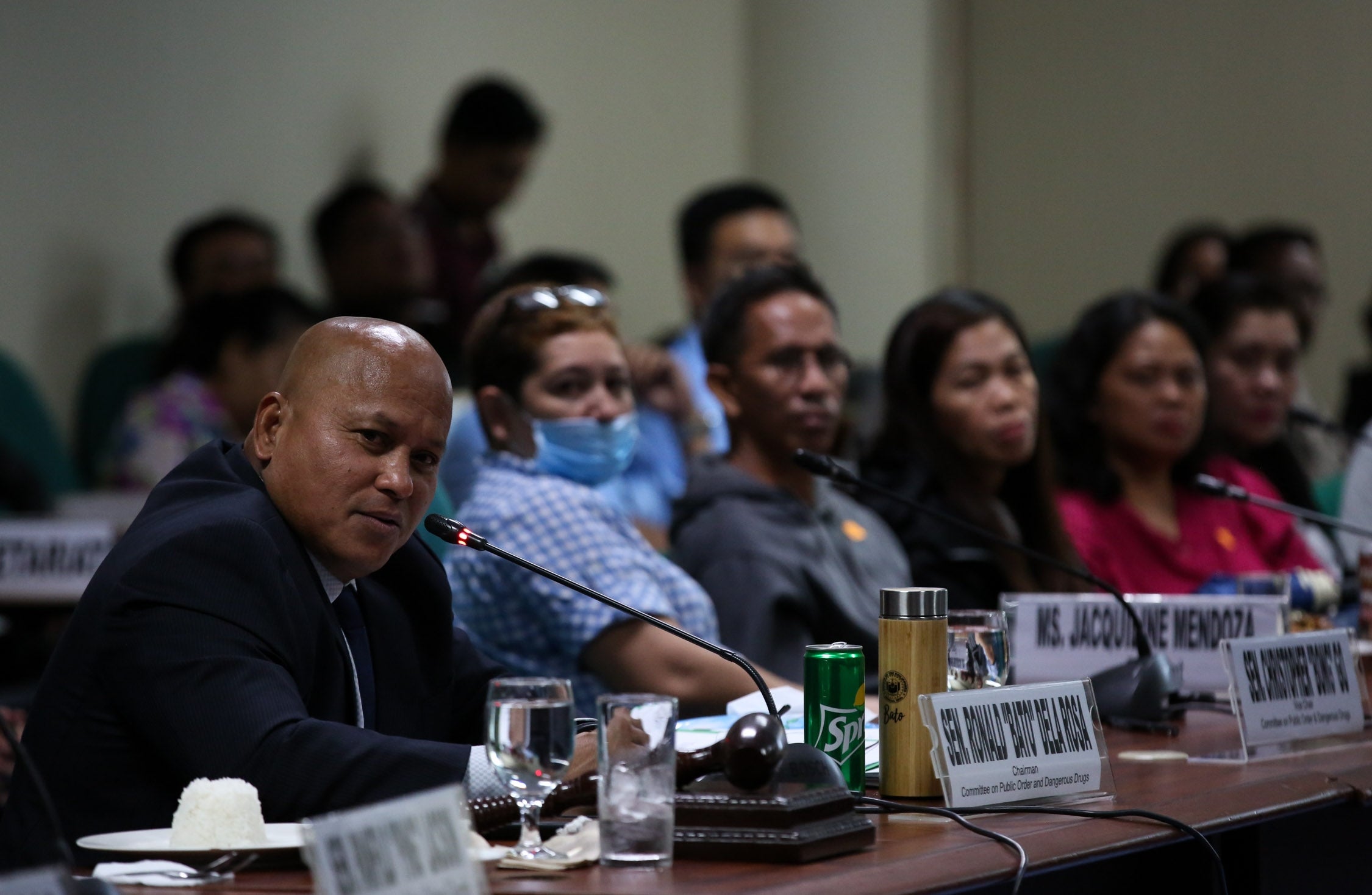 NO ‘WITCH HUNT’ Sen. Ronald “Bato” dela Rosa (left), speaking at a Senate hearing on Wednesday next to parents of students allegedly recruited by leftist organizations, maintains that the inquiry he launched was not a “witch hunt” targeting youth activists. —PHOTO BY LYN RILLON

MANILA, Philippines — A teenage activist reported as missing by the military surfaced on Wednesday and appealed to the Senate not to allow itself to be used to push a government crackdown on militant student organizations.

Alicia Lucena, an 18-year-old senior high school student at Far Eastern University (FEU), told a press conference at the House of Representatives that she was not kidnapped by the youth group Anakbayan and that she left home on July 10 because her parents treated her badly for joining the organization.

“When I was at home, they would bring me to Camp Aguinaldo (the Army camp), Camp Bagong Diwa (a Philippine National Police camp) supposedly because of my being an activist,” Lucena said.

Problems of the youth

Lucena said she decided to become an activist to fight problems facing the youth, including tuition increases and the planned return of the Reserved Officers’ Training Corps.

“I wanted to contribute whatever I can to fight these problems, especially among students like me who study in private schools where tuition is so expensive,” she said.

In the military or police camp, she said, she would be interviewed by purported rebel surrenderers who would recount to her their activities as communist New People’s Army (NPA) guerrillas.

“They tried to talk to me, but I was not engaging them. They were assuming that I was doing something illegal,” she said.

Lucena said she would make efforts to reconcile with her parents when she was already sure that they no longer had a “hidden agenda” in asking help from security forces.

“She seems unaware of the consequences of her seeking help from the police and the military,” Lucena said, referring to her mother. “I keep telling them that what I have been doing as an activist is for the common good of society.”

The student’s mother, Relissa Lucena, was one of the parents who were invited last week by the Senate committee on public order and dangerous drugs headed by Sen. Ronald “Bato” dela Rosa for a public hearing on the recruitment of students into leftist organizations.

Dela Rosa, a former PNP chief who pursued President Duterte’s bloody war on drugs that has killed more than 6,000 people since its launch in 2016, presided over what looked like a television soap opera featuring mothers who tearfully spoke about the disappearance of their children after joining activist groups.

Dela Rosa has since cited the “kidnapping of students” by activist groups as reason for his call for police access to campuses.

But the junior senator has been accused by progressive groups of using “missing children” from FEU and Polytechnic University of the Philippines (PUP) as cover for a “witch hunt” aimed at student activists.

In the press conference at the House on Wednesday, Bayan Muna Rep. Carlos Isagani Zarate called on the military and the police not to exploit what he described as a “family matter” between Alicia Lucena and her mother to push their agenda.

“Instead of bringing back together the daughter and the mother, [the police and the military] have laid the issues out in public and let the whole world feast on [them],” Zarate said.

The militant Alliance of Concerned Teachers (ACT) also questioned the wisdom of entrusting children’s welfare to  Dela Rosa who, it said, presided over the killing of 74 minors in the first year of the war on drugs.

The Children’s Legal Rights and Development Center released a report in April 2018 that showed 74 minors were killed by police from July 2016 to December 2017 and that they were not “collateral damage” in the drug war.

Many of the children, according to the center’s executive director Rowena Legaspi, were on the drug watch list and among the primary targets of police operations.

The PNP treatment of children in the drug war and Dela Rosa’s open support for lowering the age of criminal liability to 9 years old are  evidence that the police are the real “menace to children,” the ACT said.

“The former police chief cannot even make up his mind,” ACT chair Jocelyn Martinez said on Wednesday. “He thinks that elementary pupils could be criminals [and] minors in high school and college could be easily brainwashed.”

“Activism must not be mistaken for violence or terrorism,” Cervantes said in a statement on Wednesday. “It is not these mass organizations that pushed these students to march for their rights, but rather it is poverty and the worsening social conditions.”

Martinez agreed, calling the Senate hearings an attempt to silence the youth, who are “the most vocal critics of the current administration.”

Dela Rosa denied the inquiry was abetting a witch hunt.

“We are not here because the groups who have allegedly recruited their (parents’) children are critics of [the] administration,” he said at the start of another public hearing on Wednesday.

“We are here voluntarily because their children are being coddled by these organizations, and they have grown desperate because their pleas have not been heeded by [these] groups,” he said.

Dela Rosa rejected accusations that the hearings were aimed at suppressing student activism.

“To say that is a mockery to the parents who willingly exposed themselves publicly, risking public scrutiny of their personal lives, and probably putting into question their parenting,” he said.

He insisted that his committee’s inquiry was “about protecting” the family. 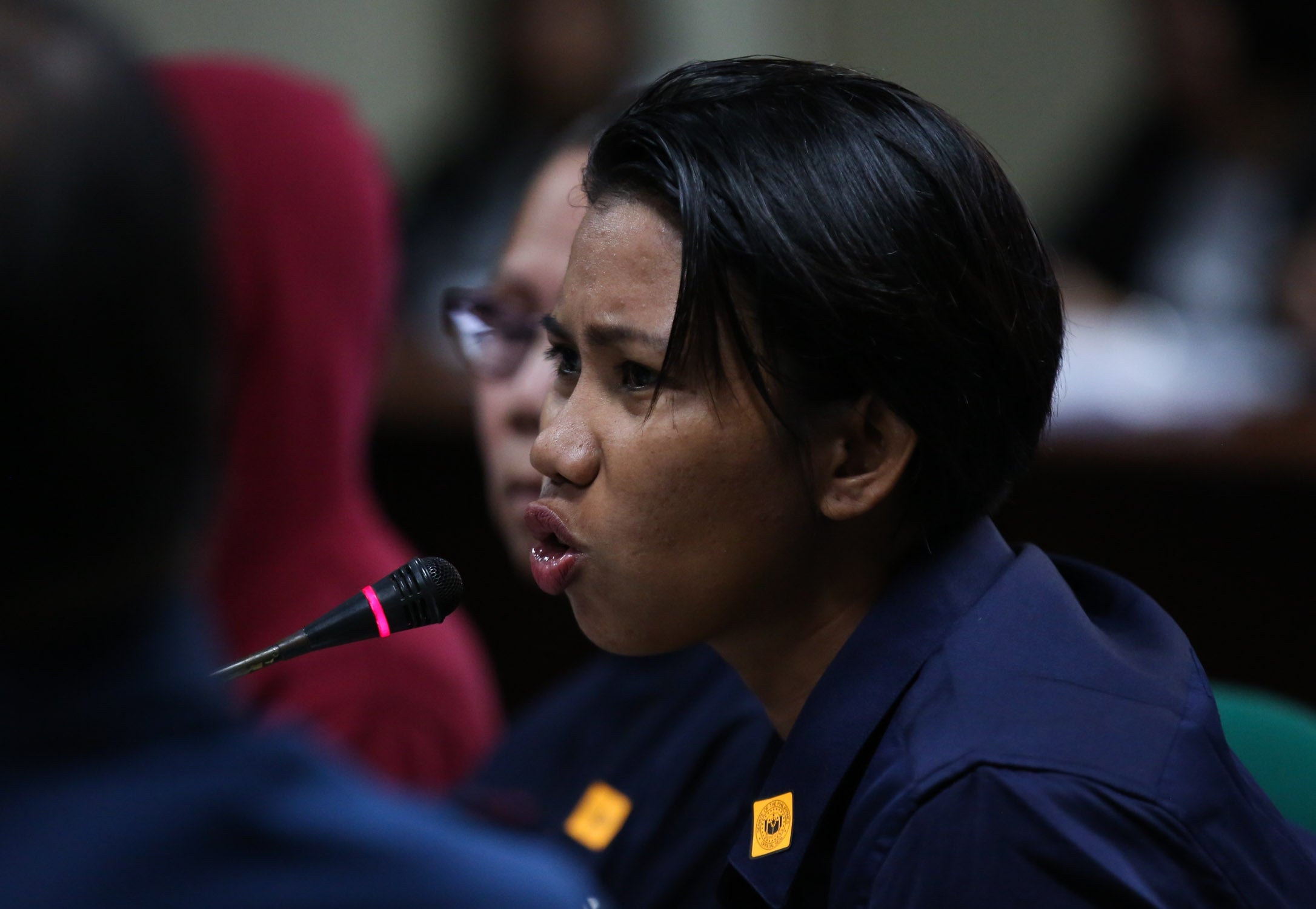 Rebel returnee” Nancy Dologuin speaks about how she became a communist guerrilla after being recruited by the League of Filipino Students. —PHOTO BY LYN RILLON

A woman described as a rebel returnee, Nancy Dologuin, appeared before the committee on Wednesday and spoke about her recruitment by the League of Filipino Students (LFS) under the Gabriela Women’s group at Mindanao State University (MSU), and how she later became an NPA guerrilla.

Dologuin threw invectives at her former colleagues and at MSU professors.

“They were pitiless,” she said.

Dologuin said she had former colleagues who had become journalists.

“You are there. Sons of bitches, all of you,” she said.

Dologuin said she joined LFS after running away from home after a family member attempted to rape her.

“Minus that traumatic experience, you would not have been recruited?” Dela Rosa asked.

At a hearing on the committee on Monday, Interior Secretary Eduardo Año, a former military chief of staff, proposed the revival of the antisubversion law, adding to suspicions of a witch hunt and drawing objections from the senators and even the Department of Justice.

Año defended his proposal on Wednesday, insisting that bringing back the law that the late dictator Ferdinand Marcos had used to silence his critics would effectively end the five-decade-long communist insurgency.

The law, which made mere membership in the Communist Party of the Philippines (CPP) a crime, was repealed in 1992.

In a statement on Wednesday, Año claimed the repeal of the antisubversion law allowed the insurgents to “use the democratic space accorded to them to regroup, organize and mobilize.”

“If we revive the antisubversion law, we will be able to dismantle the urban mass movement in the cities that fuels the armed struggle in the mountains. We will be able to stifle their so-called legal front organizations that provide sustenance to the underground mass organizations,” he said.

Justice Secretary Menardo Guevarra said membership in the CPP was not a crime “unless overt criminal acts are committed.”—With reports from Daphne Galvez, Maila Ager and Jeannette I. Andrade