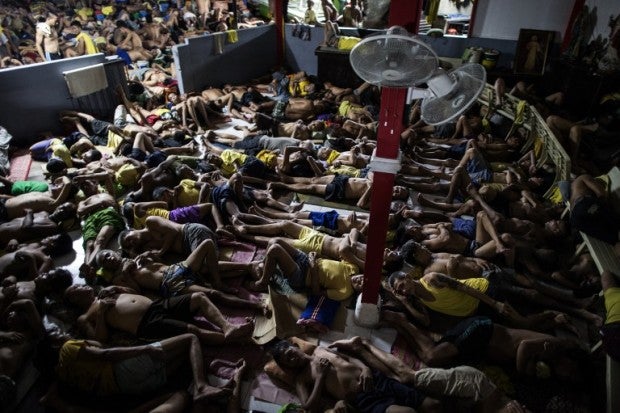 Inmates sleep on the ground inside the Quezon City jail at night in Manila in this picture taken on July 21, 2016. There are 3,800 inmates at the jail, which was built six decades ago to house 800, and they engage in a relentless contest for space. Men take turns to sleep on the cracked cement floor of an open-air basketball court, the steps of staircases, underneath beds and hammocks made out of old blankets. (Photo by NOEL CELIS / AFP)

MANILA, Philippines — The Bureau of Jail and Management Penology (BJMP) expects a drop in its jail congestion rate nationwide — from 369,60% to 137.28% — as soon as the construction of new facilities could be finished.

According to a BJMP statement issued on Wednesday, there are 257 projects under an approved budget of P2.89, which covers “perimeter fence installation, construction of jail building and additional cells, and installation of other jail amenities such as overhead water system and infirmaries.”

According to the BJMP Directorate for Logistics, the completion of the projects will create a total cell area of 365,686 square meters which could accommodate 77,806 inmates.

Director Allan Iral, BJMP chief, said the bureau was closely monitoring the progress of the projects.