Trump delays tariffs on some Chinese goods until December

WASHINGTON – Responding to pressure from businesses and growing fears that a trade war is threatening the U.S. economy, the Trump administration is delaying most of the import taxes it planned to impose on Chinese goods and is dropping others altogether. 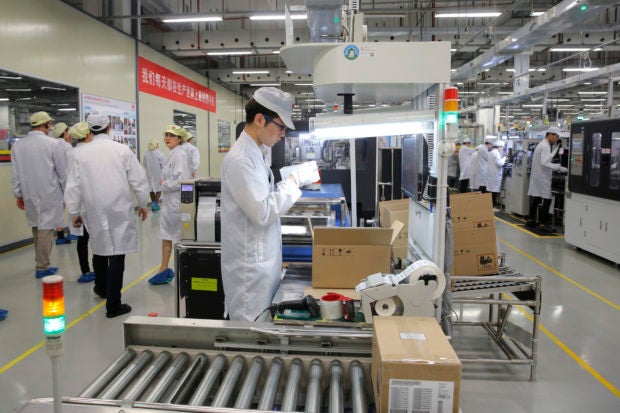 FILE – In this March 6, 2019, file photo a staff member works on a mobile phone production line during a media tour in Huawei factory in Dongguan, China’s Guangdong province. Huawei Technologies Co. is one of the world’s biggest supplier of telecommunications equipment. The United States is delaying tariffs on Chinese-made cellphones, laptop computers and other items and removing other Chinese imports from its target list altogether in a move that triggered a rally on Wall Street. (AP Photo/Kin Cheung, File)

The announcement Tuesday from the Office of the U.S. Trade Representative was greeted with relief on Wall Street and by retailers who have grown fearful that the new tariffs would wreck holiday sales.

The administration says it still plans to proceed with 10% tariffs on about $300 billion in Chinese imports — extending its import taxes to just about everything China ships to the United States in a dispute over Beijing’s strong-arm trade policies.

But under pressure from retailers and other businesses, President Donald Trump’s trade office said it would delay until Dec. 15 the tariffs on nearly 60% of the imports that had been set to absorb the new taxes starting Sept. 1. Among the products that will benefit from the 3½-month reprieve are such popular consumer goods as cellphones, laptops, video game consoles, some toys, computer monitors, shoes and clothing.

The administration is also removing other items from the tariff list entirely, based on what it called “health, safety, national security and other factors.”

The news sent the Dow Jones Industrial Average soaring more than 400 points in mid-afternoon trading. Shares of Apple, Mattel and shoe brand Steve Madden, which stand to benefit from the delayed tariffs, led the rally.

Speaking to reporters in New Jersey, Trump confirmed that he had decided to delay the tariffs, which could force retailers to raise prices, to avoid the economic pain that could result during the holiday period.

“We’re doing (it) just for Christmas season, just in case some of the tariffs could have an impact,” the president said.

Trump has repeatedly argued that his tariffs are hurting China, not American consumers. But by delaying higher tariffs on consumer goods, Trump is tacitly acknowledging that his import taxes stand to squeeze American households, too. Tariffs are taxes paid by U.S. importers, not by China, and are often passed along to U.S. businesses and consumers through higher prices.

Jay Foreman, CEO of the toy company Basic Fun, said he’s pleased that the 10% tariffs have been delayed for products like his until December. His company, based in Boca Raton, Florida, had already set prices for the holiday season and would have had to absorb the impact of the tariffs. Foreman said he is considering layoffs this fall to offset his higher costs and noted that despite Trump’s reprieve, tariffs remain a severe threat. /gsg