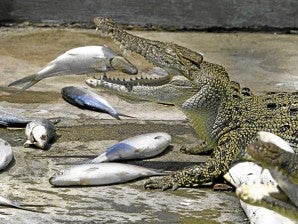 CROC CHOW. Crocodiles are fed milkfish (“bangus”) believed to have come from areas affected by massive fishkill in Batangas and Pangasinan provinces. The fish were seized from public markets by the Pasay City veterinarian’s office and brought to Crocodile Park in the city. RAFFY LERMA

DAGUPAN CITY, Pangasinan, Philippines—Milkfish (bangus) growers and wholesalers in this city and in the neighboring towns of Binmaley and Mangaldan have been losing at least 80 percent in sales since a massive fishkill hit two western Pangasinan towns on May 29, officials said on Thursday.

Malacañang blamed the disaster in Batangas to asphyxiation as a result of overstocking—a charge local officials denied—and said that Interior Secretary Jesse Robredo was poised to order the dismantling of illegal fish cages in Taal Lake.

Julie Ann Perez, president of the Malimgas-Aliguas Dagupan Vendors’ Federation, who is also a milkfish grower and wholesaler, said consumers were not buying for fear of contaminated products from fishkill-hit areas.

“Bangus producers and us, wholesalers, are really affected … despite the fact that there is no fishkill in Dagupan, Binmaley and Mangaldan,” Perez said in a local radio interview.

Milkfish harvested in western Pangasinan are usually transported to Dagupan, where wholesalers sell them, along with those produced in this city and neighboring towns, to bulk buyers from Ilocos and Cagayan Valley, and exporters.

As of 8 a.m. on Thursday, at least 10 truckloads of rotting milkfish from Anda and Bolinao had been seized by agriculture, health and police officials.

Perez said she had reminded wholesalers at the Magsaysay fish market to make sure they were not selling milkfish that died in the fishkill.

“We have the world’s tastiest bangus and buyers prefer to come to Dagupan because they know that what we sell are the best bangus,” she said.

Perez also said prices of other fish varieties, such as grouper (lapu-lapu) and siganid (malaga), had gone down.

She said only pony fish (sapsap) and threadfin bream (bisugo) remained unaffected, selling at P220 and P180 a kilo, respectively. 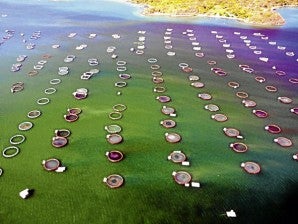 NO FISHKILL AREA. Cylindrical milkfish cages dot Lingayen Gulf near a power plant in Sual town in Pangasinan. There’s no fishkill here because the cages are spaced properly so as to aerate the fish. In some parts of the province and in Taal Lake in Batangas, hundreds of tons of milkfish, “tilapia” and other fish species have died last week, bringing heavy losses to fish cage operators. WILLIE LOMIBAO/CONTRIBUTOR

Fish losses in Batangas as of June 1 have been placed at 972.6 metric tons, valued at P76.586 million, according to Esmeralda Paz Manalang, officer in charge of the Bureau of Fisheries and Aquatic Resources (BFAR) in Calabarzon.

Most of the dead fish were milkfish but also included other varieties such as biya, apta, katanga, siliw and muang.

Manalang said the disaster was caused by abrupt changes in weather, low oxygen level at the lake and its deteriorating water quality.

Taal Lake, where at least 6,000 fish cages have been set up, is not yet fit to raise fishes because the dissolved oxygen (DO) in the lake was still 3.71 parts per million (ppm), which was still way below from the acceptable 6 ppm, Manalang said.

She said it would take one or two months for the lake’s water to stabilize.

Contrary to claims by Malacañang officials, she denied that overcrowding of fish pens could be one of the reasons for the fishkill because the “provincial government is continuously dismantling the illegal fish cages.”

But Zenaida Macatangay, municipal agriculturist for Talisay, said a number of fish cage operators in the town refused to harvest their remaining live fishes because of the very low price of bangus in the market.

Their decision was buoyed by the report that no fishkill had been reported in Talisay since early morning until midafternoon of Thursday due to favorable weather condition, Macatangay said.

Malacañang on Thursday announced that the Philippine National Police would put up checkpoints in towns around Taal Lake to keep fishkill products from reaching the markets.

Some 400 kilos of “double-dead” milkfish reportedly from Pangasinan and Batangas have been seized at the Balintawak market in Quezon City, authorities said.

President Aquino’s spokesperson Edwin Lacierda said that Robredo would also order the Batangas police to dismantle illegal fish cages that had contributed to the massive fishkill in the lake.

The dismantling of fish cages will be based on information from the Department of Environment and Natural Resources conducted, Lacierda said.

“The entire Taal is considered a protected area. In 2009, the protected area management board recommended that 14,000 fish cages be reduced to 6,000. Unfortunately some disregarded this order and so as a result we have this recent phenomenon of fishkill,” Lacierda said.

He said the Department of Agriculture had loaned 50 pumps to aerate the lake for fish to breathe.

Lacierda said he would check with Agriculture Secretary Proceso Alcala if there would be other forms of assistance for the affected fisherfolk.

Fish kept in too many cages result in the depletion of oxygen in the water, causing the deaths of the fish.

“Secretary Alcala yesterday said that this is caused by the greed of some people because some of the fish cages, he said, are stacked double deck,” Lacierda said, referring to the possible congestion in the water.

“How can the fish breathe in this situation?” he added. With reports from Norman Bordadora, Julie M. Aurelio and Leila B. Salaverria in Manila, and Marrah Erika Lesaba, Inquirer Southern Luzon