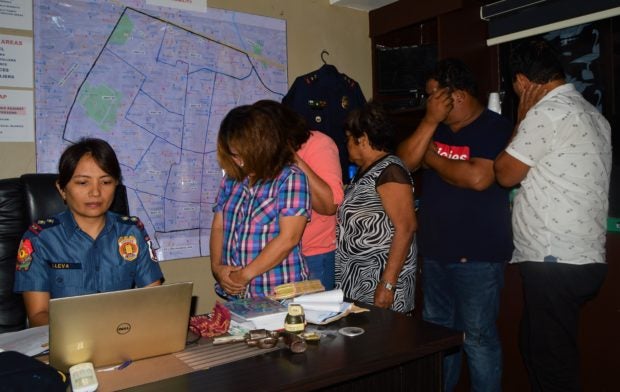 CAGAYAN DE ORO CITY, Misamis Oriental, Philippines — Police here urge those who might have been victimized by a group of swindlers, whose members have been arrested, to file complaints to bolster the charges against them.

Police are worried the five suspects, arrested last week by members of the Cogon Police Station in this city, could go scot-free if charges could not be filed against them.

The suspects, two of them senior citizens, had a modus operandi called “budol-budol” (deception) and targeted unaccompanied elderly women making transactions in banks or those taking a stroll in a mall.

They would spot a potential victim and assess if she could be manipulated. They would then approach her, establish trust, and take her cash and other valuables in exchange for a bundle of fake money.

According to police, the suspects were all based in Tagum City in Davao del Norte but operated here in Cagayan de Oro.

They were nabbed as they were about to talk to an elderly woman in front of an automated teller machine on Corrales Avenue here.

So far, three persons have already come forward and identified the suspects as the ones who had victimized them.

“They are really good at sweet-talking their victims and making them feel at ease,” Capt. Tessie Lleva, chief of the Cogon Police Station, said.

Lleva said Cogon police officers responded to a pickpocketing incident outside a commercial establishment when they spotted the suspects who were about to swindle another potential victim.

On seeing the officers, the suspects tried to escape on a vehicle but were caught at a road corner a few minutes later.

Taken from the suspects were a bundle of fake money and paper, writing pads, a .38-caliber revolver with bullets, and a hand grenade. The vehicle used by the suspects was also confiscated.

Lleva said the suspects were already sued for illegal possession of firearms, ammunition, and explosives.

She added that they could also be charged with either swindling or estafa, depending on the assessment of the prosecutor.

“Based on the number of CCTV footages we have on these suspects, we are already familiar with their profile and even the vehicle that they used to escape after committing budol-budol in the city,” Lleva said.

She said the group has been operating in this city since 2017.

Just this June, an elderly woman was divested of more than P300,000 in cash, jewelry, and other valuable items. Lleva said they were verifying if it was the same group that swindled the woman.

“They are mobile. They usually go back to Tagum after committing the act,” Lleva added.