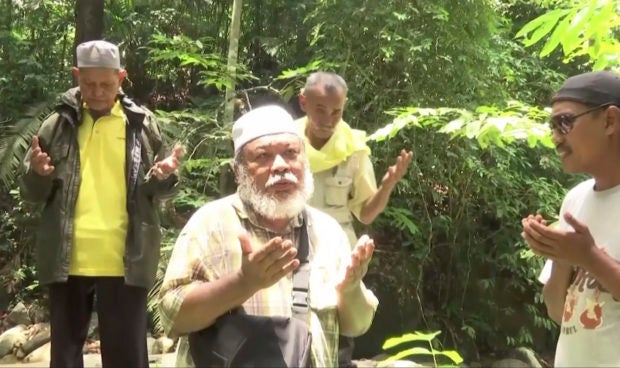 In this image made from a video, shaman performs rituals for missing schoolgirl Nora Anne Quoirin at a forest in Seremban, Malaysia Monday, Aug. 12, 2019. A Malaysian shaman joined police from Ireland, France, and the U.K. on Monday in the search for the 15 -year-old London girl who mysteriously vanished from a nature resort eight days ago, as her parents offered a cash reward and appealed for information. (RTM via AP)

SEREMBAN, Malaysia — Malaysian rescuers on Tuesday found the body of a Caucasian female in the forest surrounding a nature resort where a 15-year-old London girl was reported missing more than a week ago, police said.

Negeri Sembilan state police chief Mohamad Mat Yusop said officials were in the process of determining whether the body is Nora Anne Quoirin, who was discovered missing by her family from the Dusun eco-resort in the southern state on August 4.

The Lucie Blackman Trust, a charity that helps the families of Britons who are in crisis overseas, said in a statement: “At this time we cannot confirm it is Nora. However, it sadly seems likely.”

Quoirin’s family arrived on August 3 for a two-week stay at the Dusun, a small resort located in a durian orchard next to a forest reserve 63 kilometers (39 miles) south of Kuala Lumpur.

Police believe the teen, who has learning and physical disabilities, climbed out through an open window in the living room of the resort cottage. They listed her as a missing person but did not rule out a possible criminal element. The girl’s family said she isn’t independent and wouldn’t wander off alone, and was likely to have been abducted.

Nearly 350 people are involved in a massive search operation that includes sniffer dogs, elite commando forces and thermal detectors, but no evidence had turned up until the discovery of the body on Tuesday. Police from Ireland, France, and the United Kingdom are also on-site to assist in the investigation. The girl’s mother is from Ireland and her father is French, but the family has lived in London for 20 years.

On Monday, the mother, Meabh Quoirin, announced a 50,000 ringgit ($11,900) reward, donated by a Belfast-based business, for information that directly helps police find her daughter. /kga